Backstory: What Shujaat Bukhari’s Killing Tells You About Journalism on the Razor’s Edge 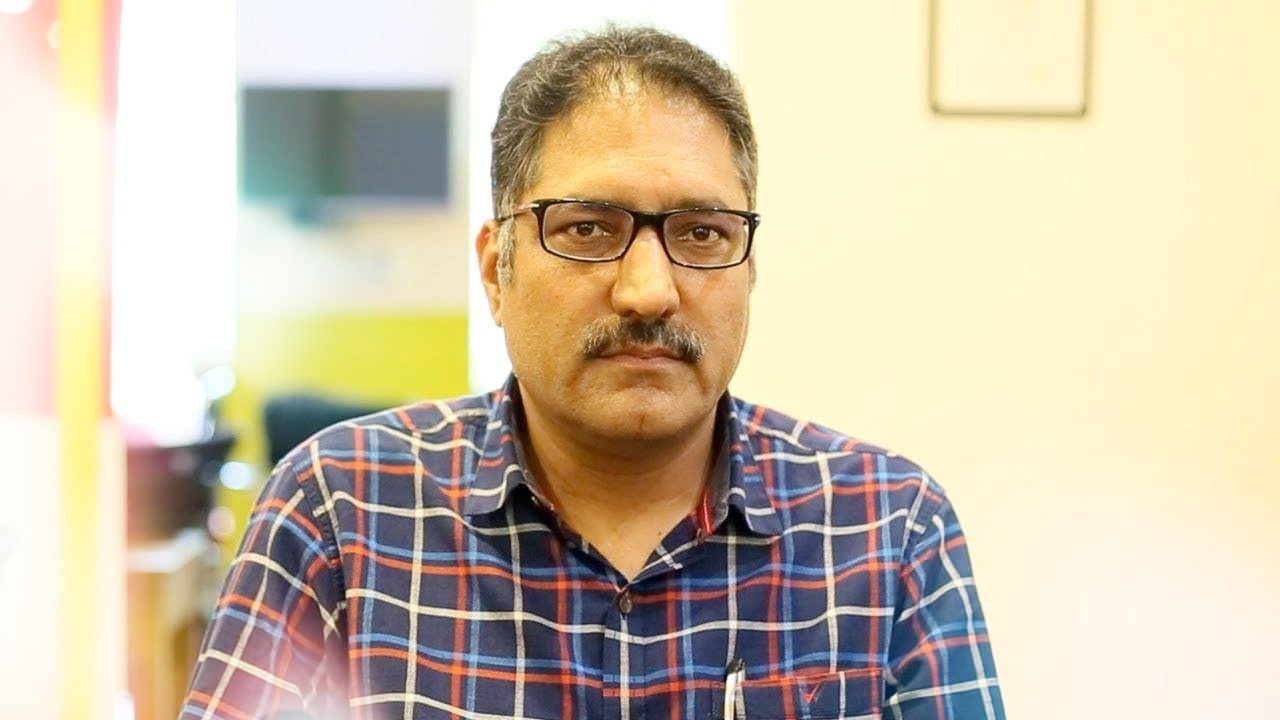 When the editor-in-chief of Rising Kashmir, Shujaat Bukhari, used the words “razor’s edge” for a piece he wrote for BBC News, describing what it was like to be a journalist in a Kashmir caught up in the blood and mired jackboots of the post-Burhan Wani phase (‘My Kashmir newspaper has been shut down, and I’m not surprised’, July 18; quoted in The Wire piece, ‘With the Killing of Shujaat Bukhari, a Fearless Voice in Kashmir Media Silenced’), he was not taking those words lightly, or using them for rhetorical flourish.

As a Kashmiri editor situated in what was “effectively the world’s most heavily militarized zone” and who yet wanted to be guided by journalistic principles, he literally had to walk the razor’s edge every minute he reached for the keyboard. As he put it in that piece, Kashmiri journalists “have been targeted by security forces and militants alike…If a local journalist reports an atrocity by the security forces, he risks being dubbed ‘anti-national’. Highlighting any wrongdoing by the militants or separatists could easily mean that he is ‘anti-tehreek’ (anti-movement) or a ‘collaborator’.” Both sides of the razor’s edge cut exceedingly well, and three decades of journalism had taught Bukhari this lesson well enough: censorship, crackdowns and bans of the Indian state, on the one hand; threats and abduction and physical attacks from faceless militants, on the other.

The Wire did an important number crunching exercise on the death toll in Kashmir (‘The Numbers Prove Kashmir Is a Highly Unsafe Place for Journalists’, June 15) and came up with evidence of why it remains one of the most dangerous places to be a journalist in the world, comparable to Palestine where in April this year photojournalist Yaser Murtaja was shot in the stomach and killed while covering the anti-Israel protests on the Gaza Strip. In Kashmir, an astonishingly large number of media persons have died since 1990 – 19 including Bukhari. What is also striking is that these murders have been perpetrated by a varied range of actors: militants, paramilitary forces, state police and the Indian armed forces.

Despite the outpouring of grief and outrage over the assassination of Bukhari among the journalist community across the country, we are yet to wrap our heads around what this loss actually means, not just for Indian journalism but for the journalism of the subcontinent. In making such an assessment, it becomes extremely important to factor in and value this remarkable ability of his to walk the razor’s edge. It was a capacity that the Wire piece, ‘Shujaat Bukhari’s Assassination is Aimed at Disrupting Any Move Towards Peace’ (June 15), took note of, “If anything, he had, over the years managed to successfully walk the fine line any professional in the Kashmir Valley – especially a media person and particularly an editor – must walk.” 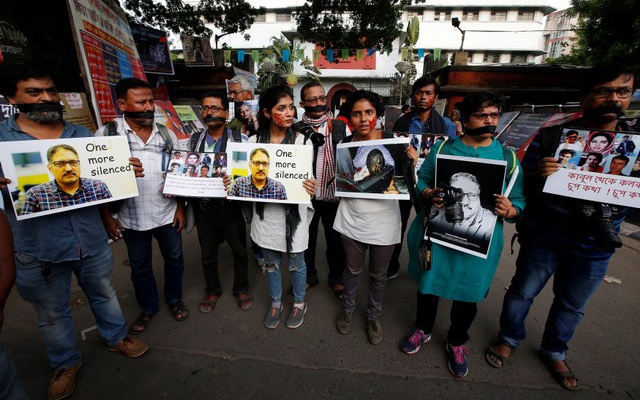 Journalists hold placards during a silent protest against the killing of Shujaat Bukhari. Credit: Reuters

Walking the razor’s edge allowed Bukhari to actually interpret the growing alienation of Kashmiris to Indians in a manner that provided, to an extent, a counter-narrative to the nationalism-on-steroids offered by primetime Indian television. Bukhari saw his journalism as dialogue in itself as well as a conduit for dialogue between the people and the state. This was also why some of his sharpest journalism was reserved for critiquing the weaponised approach adopted by the Indian military in its bid to quell militancy in the Valley. Such a strategy has always failed and will continue to fail, he argued – without a political solution and dialogue, it is just the grave that beckons.

Simultaneously, Bukhari would also come up with a careful reading of Indian politics for a Kashmiri readership. An opinion piece he wrote on May 25, which was re-published in The Wire (‘Shujaat Bukhari on the Cease-Fire: Delhi Must Treat Kashmir as Political Problem’, June 15), provided evidence of this. Analysing the words of Prime Minister Narendra Modi on his one-day visit to the Valley this May, he noted that while the prime minister had put forward the stark choice of “tourism or terrorism” to the people of Kashmir on his visit a year earlier, this time he offered development to Kashmiri youth and the advice to go back to their homes. Bukhari was intrigued enough by this shift in prime ministerial rhetoric to dissect it, and concluded that what was behind it was the 2019 elections and the pressure on Modi to sell “peace” to the electorate. The last words of this piece reveal an investment in the politics of the country, “In this backdrop, the next few months will be interesting to watch.” We are now denied his informed assessments in the run-up to the general election.

A decade-and-a-half as the state correspondent for a major newspaper like The Hindu, preceded by a period of learning journalistic ropes under Ved Bhasin, editor of The Kashmir Times – and one of the unsung greats of Indian journalism – were some of the reasons why Bhukari’s journalism defied the narrow frame. He also trained a new generation of journalists, and one of the poignant images we have of him is looking on with pride as staffers of his media house were awarded in a ceremony hosted earlier this year commemorating a decade of the newspaper he founded, Rising Kashmir. The focus The Wire brought to the assassination of Bukhari through its text and video (‘Jan Gan Man Ki Baat…Shujaat Bukari and Secularism in India’) was, therefore, valid as Shujaat Bukhari remains an exemplar of Indian journalism.

The murder of any journalist diminishes the practice and purpose of journalism in India as a whole. The map now encompasses the entire country: from south to north, east to west, from heartland to hinterland, journalists have been killed for their words and ideas, for making sense of their times. They have also been killed just for being there. Their eliminations remain one of the important indexes of social breakdown in the country.

Now for some responses from readers…

Deepak Narula writes: “I watched your video, ‘Modi lacks Moral Leadership : Yashwant Sinha’ and I found the camera on Mr Sinha was bit off focus, and the colours in the background on the furniture a little washed.” He adds that he will be happy to do volunteer work for The Wire staff, because they are bringing truth to the public domain. “It would be my sheer honor to be associated with the organisation of such prestige who do not trade truth for glory.” Thanks Deepak, that’s a lovely phrase – not trading “truth for glory”.

Karthik Rao Cavale, who is doing his doctoral studies at MIT, mailed in to remind the editorial of a note he had written some weeks ago which has gone unresponded. It pointed to what he terms as a “serious error in data analysis which has not yet been corrected in the article”. And although realises that the article in question was published many months ago, he would still like the correction to be made since many people, especially in Karnataka, continue to cite this article.

This is what he had written: While the central argument in the article, ‘Why ‘Bari Olu Modi’ Isn’t Merely a Hashtag’ is correct, it is laughable to say that Gujarat performs better than Karnataka in most social indicators. The data on GSDP and per capita income are misleading, and the conclusion that “Modi inherited a state that was richer than Karnataka and left behind a state that was poorer” is not supported by the data. Here’s why:

1. The authors have made a curious choice in presenting GSDP and NSDP per capita (i.e. per capita income) at current prices – i.e. without controlling for inflation. Also, they present no longitudinal data on NSDP per capita, so their claim of faster growth in Karnataka’s income has not been supported with any data. Ideally, this data should be presented in longitudinal form, at **constant prices** – nominal income is not a meaningful metric to gauge the quality of life.

2. The chart containing GSDP figures from 2002 to 2015-16 in fact includes data from two different series brought out by the CSO. Until 2011, the chart provides GSDP at current prices from previous series, and post-2011, it provides GSDP from the new 2011-12 series.

The problem is that the 2011 series has been calculated using a different method than the 2004-05 series, and therefore the numbers are not comparable. That is why you find a sudden jump in the Karnataka figures from 2011-12 to 2012-13. It would appear that Karnataka is a beneficiary of the new method of calculating the GSDP.

You might suggest, based on the data provided by the authors, that Karnataka’s GDP is growing faster than Gujarat’s even during the 2011-15 period. However, this is merely the result of using GSDP figures at current prices rather than constant prices. Karnataka’s apparent prosperity merely reflects the higher prices prevalent in Karnataka.

This becomes evident from the following GSDP figures, which are at constant prices, with the different base years specified:

In order to obtain a single time series at constant prices, one would have to use state-specific price indices to normalise the different GSDP series using a single base year.

I would suggest that these corrections be made to the article so that The Wire can continue to hold its reputation as an outlet where readers can expect to find an honest assessment of the truth. Contrary to what the authors suggest, Gujarat does have a fairly better record with respect to GSDP in the past two decades than Karnataka.

Venkata Subrahmanyam Voruganty is impressed with the coverage that The Wire has accorded to Sterlite issue in Thoothukudi, but says that details of the real violations of the plant and loss to ecology have not been detailed sufficiently.

Harpreet Singh expresses his appreciation that The Wire is doing its bit to tell truths and provide clarity on issues that seem fuzzy to the average person. With a general election around the corner, he believes this kind of journalism is just what the country needs. He is disappointed, however, that India’s mainstream media, including The Wire, have not dealt adequately on the topic of Sikhs in Shillong being targeted for being Sikhs, and the lack of reporting on the many difficulties and troubles that the community is going through. According to him, the prevailing situation in Shillong is extremely tense, with stones being pelted at the gurudwara and the shops and homes of Sikhs living there. The community at the moment is in great distress, even facing shortages of food and other essentials.

The Wire seems to have upset Dr Muneer, one of its readers/contributors, quite badly. He writes, “I assumed you folks have some system to acknowledge and reply back to authors making requests. You are not NYT or even a Financial Express to boast of such arrogance. I am disgusted at this apathy and withdraw my interest to write with you.”

While I can understand the sentiments expressed, and have often argued for a more prompt response from the desk to unsolicited pieces, I would also like Dr Muneer to consider the difficulties of a small publication with limited desk staff in responding on each and every piece it receives, seeing that the numbers involved are not small.