For the careful media analyst, each one of those who make the list of nominated candidates can potentially reveal a great deal about the future of Indian politics. Nothing illustrates the growing stranglehold of plutocracy on the Indian political scene more than the rising number of multi-millionaires who stand for elections. Earlier, many of them may have been content in allowing their local MP and MLA to reside comfortably in their pockets. Today, realisation has dawned that nothing works better in cornering contracts than to stand for polls directly.

It is in times like these that we need inveterate journalists like Jane Meyer, whose 2017 bestseller ‘Dark Money: The Hidden History of the Billionaires behind the Rise of the Radical Right’, sliced through Donald’s Trump’s victorious presidential bid in the 2016 US election, to reveal its golden, or rather not-so-golden core – the bottomless flow of campaign funding for the Republican Party that came from deep pockets, many of them with no names but with clearly defined policy interests. It was a process that amounted, as she points out, to the corporate capture of the country’s political system as a whole.

Today, as India votes in its next Lok Sabha, there can be no doubt that there is a great deal of dark money sloshing around. Yet, the ingenious architecture of the Narendra Modi government’s “electoral bonds” has ensured that any information about this is hermetically sealed from common knowledge and voters are none the wiser for it.

The efforts of the Election Commission of India (ECI) to get judicial relief on the issue before the elections (‘In Supreme Court, EC Criticises Modi Govt’s Electoral Bonds and Foreign Funding Tweaks’, March 27) has come to naught. The Supreme Court issued an inexplicable order that political parties submit to the ECI details of the funds they have received through electoral bonds – after the elections are over, in fact a whole week after the verdict has come in. For abundant precaution this too, the court insisted, should be presented in sealed covers – layer upon layer of court-enabled opacity!

The Supreme Court issued an inexplicable order that political parties submit to the ECI details of the funds they have received through electoral bonds in a sealed cover, after the elections. Credit: PTI

If the country had never seen such large caches of secret election funds being pumped so directly into its veins as it has in this election, the scale of hate mongering and communal poisoning has also been unprecedented. This should not surprise. It is the logical extension of a political scenario where lynching has become normalised – even valorised by ministerial garlands and encouraged by a chilling prime ministerial silence that remains largely uncalled out by the media.

The insertion of Pragya Thakur into the BJP’s electoral game plan as its candidate for Bhopal is a continuation of the larger project of altering the country’s landscape so decisively that no secular identification or institution is left standing.

The mainstream media has played its role in normalising this flattening, through a combination of denial, muteness and justification. They look well primed to adopt an even more pro-active stance of sustained support for the “project”, should the present regime come back to power. We need to only remember how journalists, generally speaking, had quickly settled down to considering Yogi Adityanath an “able administrator”, despite earlier noises of concern over the fate of secularism in the country when he was crowned the chief minister of India’s largest state in 2017 elections. Here was a man whose most prominent identifying feature was his capacity to foment wave upon wave of hate and derision against Muslims through his own speeches and that of his supporters – he even sat silently when one of them called for the raping of exhumed bodies of Muslim women. His private army, the Hindu Yuva Vahini, may have been “dismantled” for the record, but it would just take a snap of his fingers to get the outfit roaring again.

It is the BJP’s very deliberate weaponisation of a unreconstituted Hindutva, in order to retain and extend its power, that called for the air-dropping of Pragya Thakur, embodying as she does the fiery patina of the Malegaon blast case in her person. The saffron robes donned by both protagonists have only added to their saffron lustre. Apologists for Adityanath argued in 2017 that the fact that he had been elected time and again indicated that while the opposition may exaggerate his religious extremism, the fact is that he actually stands for development. A similar pretense cannot work for Pragya Thakur – it is her unvarnished appeal as the poster girl of this weaponised Hindutva that is being sought here.

That the BJP would choose to cash the Pragya Thakur cheque was anticipated by author Jyotirmaya Sharma, a decade ago. The Wire did well to reproduce his piece, ‘There is No ‘Hindu Terrorism’. But There is Something Called Sangh Parivar Terrorism’ ( April 18). He had written: “The only difference between Osama and Pragya is that the former is unlikely to contest an election in the future and become a member of an elected body. In the case of Pragya Thakur, given the way in which criminal investigations are conducted, there is a strong possibility of her becoming a people’s representative, as she would only be following a ‘great’ tradition.”

The prime minister, in a recent interview, only iterated this when he claimed her as a “symbolic answer to all those who falsely labeled the rich Hindu civilisation as ‘terrorist’”. The irony, of course, is that this is no “label” – it is a bonafide legal process that has found enough evidence to charge her for the Malegaon blasts.

But now that the chowkidar-in-chief has spoken, it means that no matter the extent of public outrage over Thakur’s rant about Hemant Karkare, which incidentally got even the IPS Association – a body not known to take rash “anti-national” stances – to condemn it (‘My Curse Killed Hemant Karkare, Says BJP’s ‘Sadhvi’ Pragya Thakur’, April 19), there is no way her candidature will be withdrawn.

Even her so-called ‘apology’ for the Hemant Karakare statement was no apology, only a clarification that she didn’t want “the enemies of the country… being benefited from it”. Given this, The Wire heading for this story, ‘Sadhvi Pragya Apologises for Her Remarks About Hemant Karkare’ (April 19), was inaccurate.

Media coverage of Pragya Thakur, once far more rigorous, tended to conform to the dominant BJP discourse. To date, there has been no conclusive media investigation into her medical profile despite the fact that it was a central factor for the leniency that was shown to her.

If the media had done its job, perhaps Bhopal would have been spared the discomfiture of having a severely compromised person imposed upon it as a potential Member of Parliament. 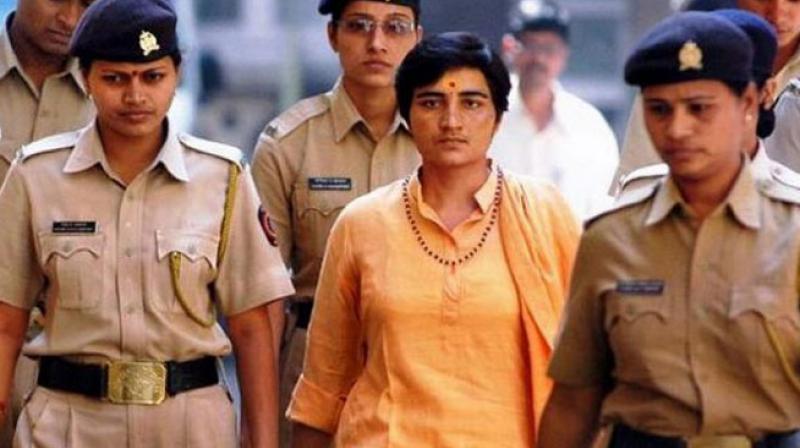 In her application, Thakur had contended that there was no evidence against her. Credit: PTI

Capturing the multi-dimensional nature of media repression in India today is a tough proposition, but broad indices like the World Press Freedom Index devised by Reporters Without Borders, serves two useful purposes.

Firstly, it signals that the international community is invested in understanding the depth and nature of Indian democracy, of which media freedom is an inalienable part. Secondly, these annual assessments constitute an archive of data that is helpful in making comparable assessments.

Going by these indices, India’s ranking has, in the years under the present political dispensation, registered consistent decline. In 2017, it fell three places from 133 to 136. In 2018, India’s rank fell by two spots, to 136. Today, in 2019, it has landed on the nicely rounded off figure of 140, after a similar decline.

This year’s report specifically mentioned the online harassment against those who criticise Hindu nationalism and who are labelled as “anti-Indian”. The recent Union home ministry ordered probe into editors in Assam who have been critical of the BJP’s Citizenship Bill, in response to a complaint filed by an outfit linked to the RSS, comes as just more evidence of the validity of such an assessment. In The Wire piece, ‘Home Ministry Orders Probe Into Assam Editors Critical of BJP’s Citizenship Bill’ (April 18), one of the editors who sought to be probed put it concisely, “This is a pressure tactic, an attempt to terrorise not just us but others too who are opposed to the Bill.” The home ministry, incidentally, has just denied any such probe and terms it fake news. But fake news too has a chilling effect.

It’s always a delight to get a response from an alert and thinking reader. The Wire reader, Marisha Thakur, poses a question that should intrigue the editing desk: “As per The Wire style, does Income Tax Department abbreviate as I-T or as IT? Asking because IT usually refers to information technology… and, you can understand, how that might be amusing in stories like ‘Hyderabad: IT Dept Confirms Rs 8 Crore Seized From BJP Was Withdrawn From Bank’ (April 12).

Meanwhile Sourav Meher has a pertinent request. He wants Indian media to do more stories on the families of CRPF jawans who were killed in Pulwama. “While it seemed at the time of that attack that all of India was enraged, now it seems everyone is busy with the IPL these days.” He also asks: “Has the government done anything (for these families) except tweeting condolences?”

Mustaq of Haldwani, Uttarakhand, having observed voting in the early phases of the present election has two important observations to make to Chief Election Commissioner Sunil Arora.