Backstory: There Is Space Under the Government’s Tent, but Do We Want to Be There?

There is no dearth of issues that are presently roiling India, from the early Diwali bonus – with many zeroes attached to it – that the RBI has just handed over to the Narendra Modi government and the terrible news about the economy (‘India’s GDP Growth Drops to 5% for First Quarter of FY20, Slowest in Six Years’, August 20) to the 19.06 lakh men, women and children, who now find themselves excluded from the National Register of Citizens (‘Final NRC Published in Assam; 19.06 Lakh Applicants Left Out’, August 31).

The merciless bureaucratese that marked this denouement could not have been expressed better than in the press release that was issued: “Taking into account all the persons already included and after disposal of all the claims and objections and proceedings under clause 4 (3) of the Schedule of the Citizenship (Registration of Citizens  and Issue of National Identity Cards) Rules, 2003, it has been found that a total 3,11,21,004 numbers of persons are found eligible for inclusion in the final NRC, leaving out 19,06,657 numbers of persons including those who did not submit claims.” That’s it. Lives tossed out like yesterday’s tea leaves – after “due process” of course.

How this story from a border state plays out in mainstream media, we will have to see. But in another border state, the twin strategy of unleashing military power and leashing in media power is paying dividends to New Delhi. The large tent of “normalcy” that has been pitched up in the fissured land of Kashmir, now cuts off from view the everyday tragedies, the suffering, the sorrow, the loss, the sleepless nights, the dead eyes of pellet gun victims.  The Supreme Court – the last bastion of liberty – which was in a tearing hurry to complete the NRC process, appears to be in no apparent rush to restore lost freedoms in Kashmir.

So look for the “idea of India” amidst the debris, urges the writer of the piece, ‘Kashmir: Three Weeks of Living Under ‘Normalcy‘ (August 29):“For the besieged, brutalised people of Kashmir, the idea of India has come to represent the stifling of their voices, the imprisonment of political activists, more deployment of forces, a military siege, pellet guns, constitutional deceit, institutional injustice and the denial of basic human and political rights.”

A photo album that The Wire brought readers provides rare glimpses of life under that tent (‘In Photos | Life in Kashmir After August 5’, August 30). One image, in particular, is haunting. A post office – the humble site of daily communication for the ordinary Kashmiri – is now banned, barred, out of bounds, as if its very presence constitutes a terrorist act. It must have been one such post office that inspired Agha Shahid Ali to write in 1997 the following lines:

“Each post office is/ boarded up. Who will deliver/parchment cut in paisleys, my news to prisons?/Only silence can now trace my letters/to him. Or in a dead office the dark panes.” 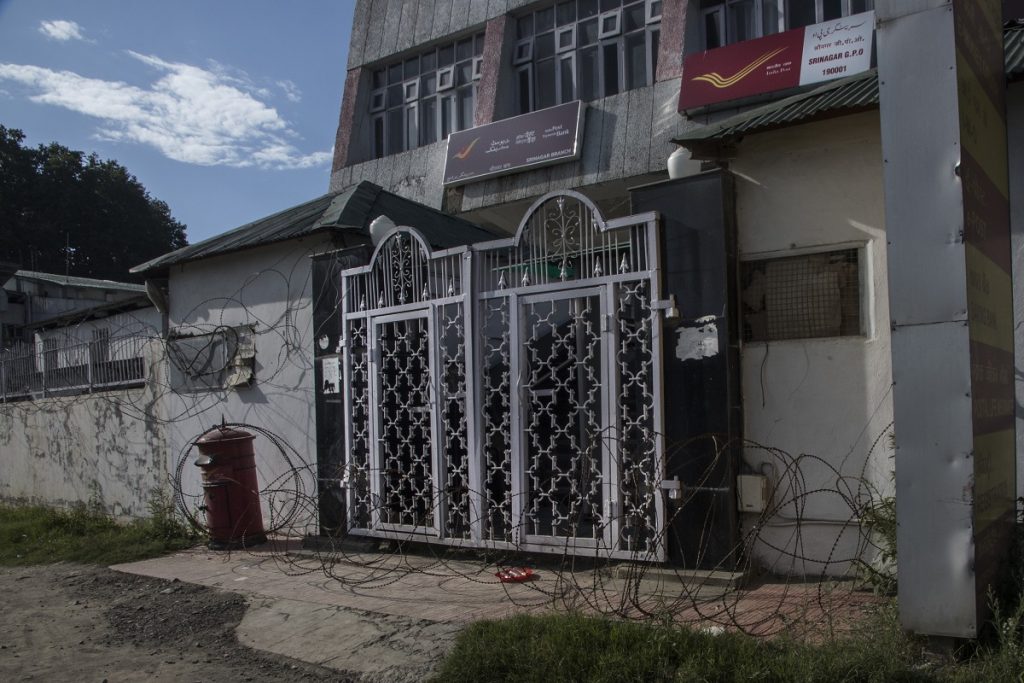 Photographs and poetry prove inadequate in capturing the immeasurable trauma of Imtiyaz Ahmad as he stared down on his burnt feet, against the burnt walls of his burnt house (‘What Happens When Your House Catches Fire and You Can’t Call Emergency Services’, August 27). His home would have been safe if even a landline to the fire station was functioning.

A barred post office, a burnt down house, a pharmacy whose shelves are empty of life-saving medicine (‘Kashmir Running Short of Life Saving Drugs as Clampdown Continues’, August 22). It needed the internationally reputed medical journal, The Lancet, to editorialise about the healthcare crisis that is being visited upon Kashmir. The ever patriotic Indian Medical Association (IMA) immediately responded – not to the crisis but to The Lancet. It has “no locus standi on the issue of Kashmir” and has “committed breach of propriety in commenting on this political issue”, it huffed. Arrey, if The Lancet has no locus standi, what exactly is preventing you – with a whole lot of locus standi – from highlighting this issue?

We are witnessing a game of dominoes, with institution after institution collapsing against each other. While the custodians of Indian medical practice, the IMA, rushes to comfort the government from stinging yet valid criticism, the custodian of freedom of the media in the country – the chair of the Press Council of India, Justice C.K. Prasad – actually submitted a suo motu note offering “to assist Court in balancing the national interest with the shutdown of communications”. The Wire commentary, ‘When Journalists Start Speaking Comfort to Power’ (August 29), rightly critiques this “completely gratuitous gesture that pre-supposes that somehow national interest has to be kept in mind when discussing press freedom”.

If the PCI chair had to finally issue an elaborate clarification on his unilateral move, it was because neither his predecessors nor his peers in the council went along with it. Justice P.B. Sawant, who had chaired the Press Council for two terms, had no hesitation in terming the move as “unprecedented and unfortunate” in an exclusive interview with The Wire (‘Press Council Stand on Media Curbs in Kashmir ‘Unfortunate’: Justice P.B. Sawant’, August 27). What was also striking, and heartening, this time was that a large group of journalists from across the country, including senior editors like N. Ram, were quick to red flag this capitulation in no uncertain terms.

But why are the people who actually stand up and call out blatant wrongdoing so terribly few in number? The writer of the piece, ‘Parables For Your Grandchildren’ (August 31), tries to count the ways normal citizens capitulate in situations like this. Their motivations vary: “There was fear of speaking out, of reprisals”; there was “greed, of pecuniary benefit, of professional success, of privilege, power, if you looked the other way”; “there was pressure to conform”… There was also, one may add, ideological inclination and the righteous self-affirmation that comes with being on the right side.

Also Read: Parables For Your Grandchildren

Yes, there are many reasons that good people, distinguished women and men, upright professionals, including media professionals, are working hard to build ‘New India’.

Interesting to observe how distinctly different were the styles of the two successive Union finance ministers, Nirmala Sitharaman and Arun Jaitley. While Sitharaman hopes to control media content by sequestering herself from journalists behind the thick walls and bristling security of North Block, primly refusing to divulge an iota of information; her gregarious predecessor, Arun Jaitley, used to set about controlling the media by feeding his circle of mediapersons tasty, scoop-like scraps regularly, which also got him the reputation of being “Bureau Chief at Large”. The Indian Journalism Review had an illuminating piece on the 45 tweets that followed Jaitley’s demise last week. They came from “reporters, editors, presenters and owners” and told you how to “understand journalism, Delhi style: the scams, the papers, the gossip, the plugs, and the headline management.” A reader of The Wire, Kannupriya Mehta, sent in this touching mail: ‘“The last time I heard from a very famous photographer of Kashmir was on August 5. His words came from a tormented heart when he said, “Pray for Kashmir.” As I write this, I recall the school textbooks I grew up on, that extolled the beauty of Kashmir and saw it as the crown of the country. But the reality today really slaps you hard, after the abrogation of Article 370 and 35A, and the clampdown on the Kashmiri’s right to freedom of expression.

The artists of Kashmir have always tried to project the real essence of ‘Kashmir and Kashmiriyat’ through their work. A lot of them, inspired by Agha Shahid Ali’s poetry, portray the pain and suffocation that has engulfed the valley over the past few years. When I login to my Instagram today, I don’t see their beautiful pictures or thoughtful write-ups, but only a series of red profiled pictures which say, “Pray for Kashmir, as it bleeds”. This clampdown has not only made the region bleed but has also snatched away the creative work of Kashmiris. The golden chinars and the majestic Dal lake are today draped in an uneasy silence. The cameras that once captured them lie unused. I recently got a call from another photographer friend, and his words wounded me: “My camera lies at home with some good old memories of beloved Kashmir. But now I wonder when I will be able to pick up the camera again and show you my Kashmir again.” As we finished our conversation, I felt the pain of an artist devoid of work – like a painter whose canvas has taken away. Art gives identity to the artist, but the opportunity to express it has been snatched away.

The Wire has been receiving a lot of mail and tweets supporting its work, accompanied of course with a fair number of vituperative offerings as well. M.R. Dua, a media veteran, writes in: “Please accept my heartiest compliments for a vigilant eye on Modi-Shah India. Believe me, it’s a great, but hard task. Only one request: please stay objective, honest, impartial, unaligned. If The Wire does this, the sky is the limit for it!”

Another reader, Dr Pushpinder Singh Khera, sent this message across: “The essence of a vibrant democracy is a free and fearless media. Keep up the good work and keep asking tough questions to the powers-that-be in these trying times for our country.”

Finally, there was this from a courageous woman activist and thinker: “Congratulations to The Wire and its team for withdrawing the petition in the Supreme Court to quash the defamation case filed by Jay Amit Shah against it. This was a befitting reply to the remarks made by Justice Arun Mishra on the media. It was also a courageous stand. Your readers stand by you and support your sense of dignity. Warm regards to all of you” (‘The Wire Withdraws its SC Petitions, Will See Jay Amit Shah in Trial Court Now’, August 27).

Some queries from readers who have faced access snarls. One mail asks, “Why am I suddenly unable to access thewire.in except through a VPN/non-Indian IP address?” Another from Sanjai Kumar Nandkumar, wanted to know why the English version of the Android app was no longer available in Google play store. He adds, “The installed version of the app is also unresponsive.” Can the techies at The Wire please respond?