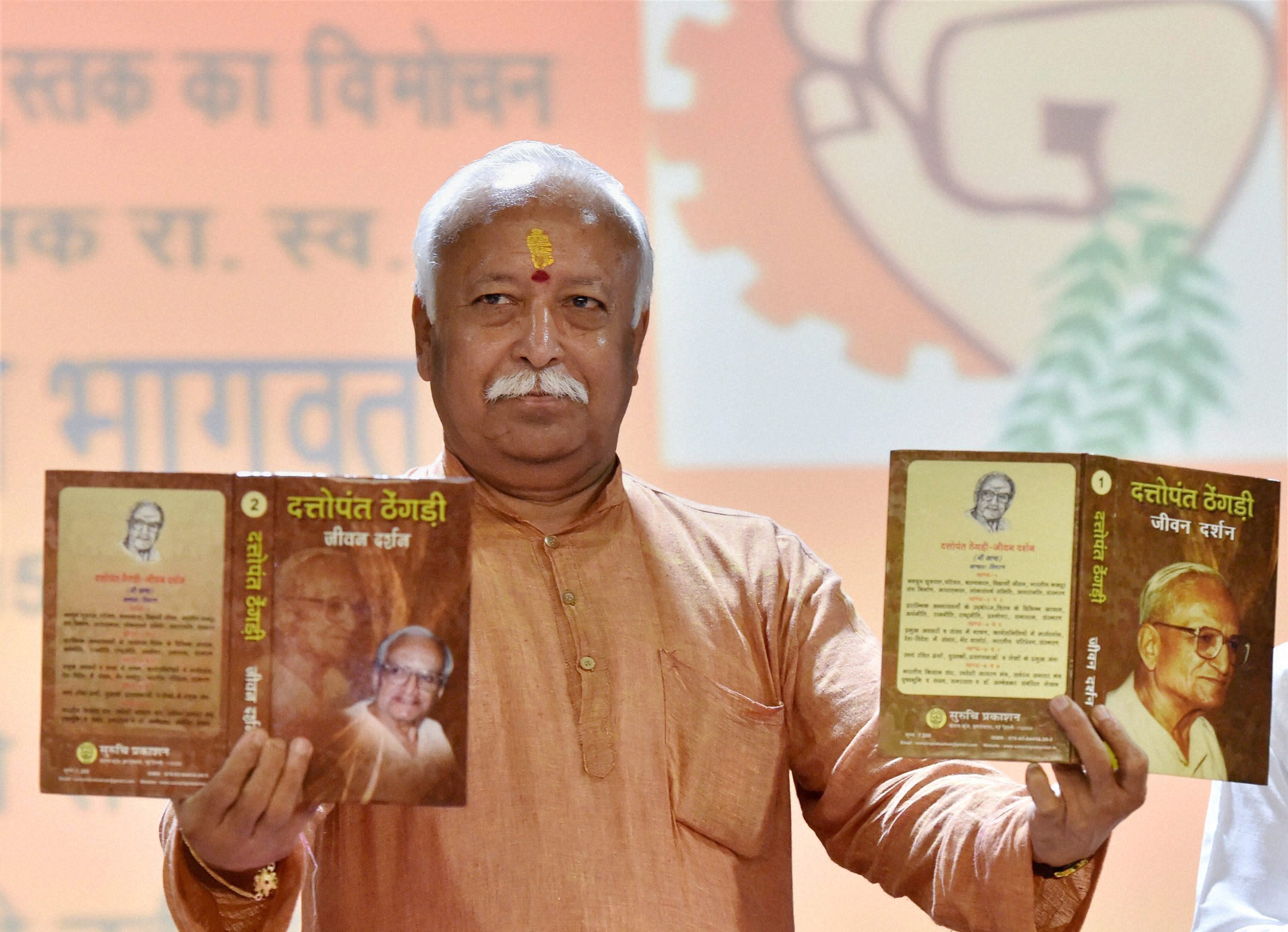 A little knowledge is a wonderful thing. In an age when the attention span of the average human being is estimated to be eight seconds – or this is what a Microsoft study claims, and Microsoft being in the business of monetising attention spans should know – and at a time when Indian school textbooks come with gems like it was Japan that had dropped nuclear bombs on the US, the Rashtriya Swayamsevak Sangh (RSS) too can emerge bathed in secular light, the very embodiment of constitutional values.

All in all, the RSS sarsanghchalak (head and guide) Mohan Bhagwat is having an enviable run in the Indian media, having come a long way since the days when his Dussehra address on Doordarshan – four months after the Modi government was sworn in – had caused widespread consternation and adverse comment. He has also learnt some lessons along the way, having had a chance perhaps to watch at close quarters how a pracharak-turned-prime minister does it: one, for the widest appeal, speak in soundbites; two, indicate that you will be open to questions and then answer pre-formatted ones with complete candour; three, tailor the message and metaphor to the occasion – lion and wild dogs for an appreciative NRI crowd, Hindutva-as-a-way-of-life for the middle classes back home. Although, talking of the lion, as the piece, ‘The Plight of Mohan Bhagwat’s Lonesome Lion’ (September 16) reminds us, it is a bovine consuming animal, so the analogy could potentially create dissonance.

But let us go straight to the latest talking point: the recent conclave hosted by the RSS, titled ‘Bhavishya Ka Bharat – An RSS Perspective’. This three-day affair was held at New Delhi’s Vigyan Bhavan, an auditorium that the government of India uses for its most important events (but that shouldn’t distract us, the RSS is, after all, our unacknowledged parallel government). The important thing to note about the mainstream media response to this event was the seriousness with which it was taken, with systematic front-page and extensive prime-time coverage. This, surely, is a first in the annals of the national media.

Four broad media narratives emerged as a consequence: One, and perhaps this was the most prevalent, maintained that the RSS has changed, and if people don’t recognise this, it is they who are intolerant. A second came with a little plea: if you, the RSS, has changed (and we want to truly believe you have), you will have to demonstrate it on the ground by reining in your cadres and affiliates and convincing them not to kill Muslims, etc. The third narrative focused on decoding the change – it is related, some argued, to wanting to broaden the appeal of the Sangh in order to win the 2019 general election; others wondered aloud whether this was about the RSS wanting to gain the upper hand nationally and put an arrogant Narendra Modi in his place.

The fourth narrative – and this was confined to just a narrow spectrum within the media – was also about decoding the purpose of the show, but doing it to demonstrate that the RSS has, in fact, not changed at all; that all that was being proffered was old amritam in new chalices.

The Wire accorded some attention to the event, providing a fairly comprehensive report-as-wrap once it had concluded (‘Mohan Bhagwat Goes All out to Portray RSS as an Inclusive, Evolving Organisation’, September 19). More importantly, it offered a deconstruction of the Sangh, how this was a “strenuous bid to seek legitimacy for an organisation which has had a shadowy and murky past, whose activities have been banned at least four times since India became independent.” The same piece goes on to call out the lie of “majority victimhood” that continues to be perpetrated by RSS affiliates (‘Mr Bhagwat, Proof of the Pudding Will Lie in the Eating’, September 19). The article, ‘There Is No Nuance in Mohan Bhagwat’s Statements on Hindu Rashtra and Muslims’ (September 19), underlines that there can be escaping the logic of the Sangh’s basic shibboleths. V.D. Savarkar’s words about Muslims: “For though Hindusthan to them is Fatherland as to any other Hindu yet it is not to them a holy land too. Their holy land is far off in Arabia or Palestine”, the writer points out, is an idea that “runs counter to the Indian constitution and the fundamental precepts of a democratic republic.” What Bhagwat attempted, and successfully at that going by the general media reception to his words, was to present such toxic ideas in soft focus – “Hindu Rashtra doesn’t mean there’s no place for Muslims. The day it is said so, it won’t be Hindutva any more”. He even appeared willing to discard concepts put forward by Sangh icons like M.S. Golwalkar that were not “eternally valid”.

It was his claim that Hinduism is intrinsically secular, however, that needed closer examination and it came almost serendipitously in the form of a piece by a professor of International and Comparative Politics at LSE, ‘Why Locating the Indian Secular State in the Virtues of Hinduism Is Problematic’, (September 17). Written possibly before the conclave and not with any reference to what Bhagwat actually said there, it nevertheless served as a timely critique by pointing to three dangers inherent in conflating secularism with Hinduism. First, such a formulation suggests that India’s secular state is not truly impartial – that a “soft Hindu state, based on Hindu tolerance” would be one in which minorities live on the sufferance of the majority. Two, it “demeans other faiths as inferior to uniquely benevolent Hinduism”. Three, and the writer terms this as the most dangerous, it implies “that there is no need for a secular state as such. India can simply be a Hindu state in which the majority faith’s innate nature will ensure a paradise for all, Hindus and non-Hindus alike.”

Engaging with the sarsanghchalak, the media must know, requires perspective, a firm grasp of what secularism means, and a deeper knowledge of an organisation that Walter K. Andersen and Shridhar S. Damle, in their new book The RSS A View to the Inside, describes as the “world’s largest non-governmental organization”, with an estimated 1.5-2 million regular participants in its nearly 57,000 local daily meetings, and which holds the central argument that it is ethno-nationalism – in this case, Hindutva – that is the primary force shaping Indian society.

Sourjya Bhowmick would like to bring to our attention a “glaring error” in the piece, ‘Why It Is Important to Preserve Tagore’s ‘Gurudev’ Image’ (September 18). The article has the following lines: “The other day, an old and very dear friend, with very cultivated tastes in literature and art, happened to ask me an innocuous question: is it true that Tagore had composed ‘Jana Gana Mana’ by way of salutation to a visiting British prince when India was still several decades away from her independence? When I said yes, his next question was equally innocuous: why then do we happen to celebrate the same verses as our national anthem…” According to Bhowmick, “‘Jana Gana Mana’, is not a salutation to British prince. There are plenty of articles, research work and books that prove this point. Additionally, a complete reading and an understanding of the full song, would dispel such a myth…”

He adds, “If the author’s anecdote is in jest, then it is in poor taste and can confuse readers. I wish the editorial desk had double-checked this point with the author before publishing it.”

We received a touching letter from a woman student of Jawaharlal Nehru University (JNU) about the violence that has marked its recent history. It is the commitment it expresses to the idea of the institution that prompts me to carry it here…

“Before you start reading this letter I request you to please keep aside the ‘anti-national’ or any other judgemental notion regarding JNU for the moment.

“I am a ‘common’ student of JNU and am deeply saddened by whatever is happening inside its campus since the counting of votes of JNUSU Election began on September 14. Counting of votes was put on halt for at least 12 hours on September 15. On September 17, early in the morning, unprecedentedly brutal acts of violence took place at various hostels in the campus. I won’t take the names of anyone or any political or students’ organisation associated with these activities, because if I do so I’ll be tagged with the words ‘Naxali’, ‘Maoist’, ‘anti-national’, etc. But I would request your team to spare some time and to do research on whatever happened in the campus and bring out the truth, so that ordinary people get to know it.

This issue is more important than you think. JNU is a ‘think-tank’. It is because we are taught to think, that we dissent, we debate, we question. This is what makes us ‘aware’, rational citizens of the nation. We practice and uphold democracy in its true sense. We cannot simply accept whatever is imposed without thinking it through. Not conforming to, or accepting a ‘particular ideology’, cannot make me anti-national. Freedom to live, freedom of choice are the most fundamental rights any citizen deserves and JNU grants us those rights because it believes with freedom comes responsibility.

I joined JNU in July 2017, in the year and two months that I’ve spent here, I have seen multiple attacks on this institution by people who don’t want us to think and question. Until yesterday, I could roam around in the campus even at 3 in the morning without any fear, now I don’t feel safe even in daytime. No action has been taken against the bullies who caused all the violence.

I strongly condemn these acts of violence and the ones involved in those acts and demand necessary and strict action be taken against them, not because I am inclined towards some political ideology or students’ organisation, but because an undemocratic bunch of hooligans is trying to create turmoil and destroy the peace and culture of JNU. This is something that I, as a student of JNU, cannot accept and tolerate. #LongLiveJNU!”

Jerin, another regular visitor to this news portal, feels that the new webpage design seems too heavy and slow, and says the old design was much more responsive to interactions with readers. This is a case, it seems, of win some, lose some. While greater display of the work on offer is a positive development, there is a price to be paid as well.

Abhijeet M. describes himself as a “big fan of the portal and would like to congratulate the entire team for the ‘fantastic job of journalism it is doing'”. He rues the fact, however, that The Wire has not paid sufficient attention to organisations like the All India Backward (SC, ST, and OBC) and Minority Communities Employees Federation – BAMCEF – and Bharat Mukti Morcha. He writes that leaders like “Waman Meshram, Sharad Yadav Vilas Kharat, Prof Ohol and many others are actively involved in organising various communities and on varied subjects, yet no mainstream media has yet given them their due recognition.”