Heads of news organisations will have to sign an undertaking that they will not invite any 'controversial' persons to debate programmes. 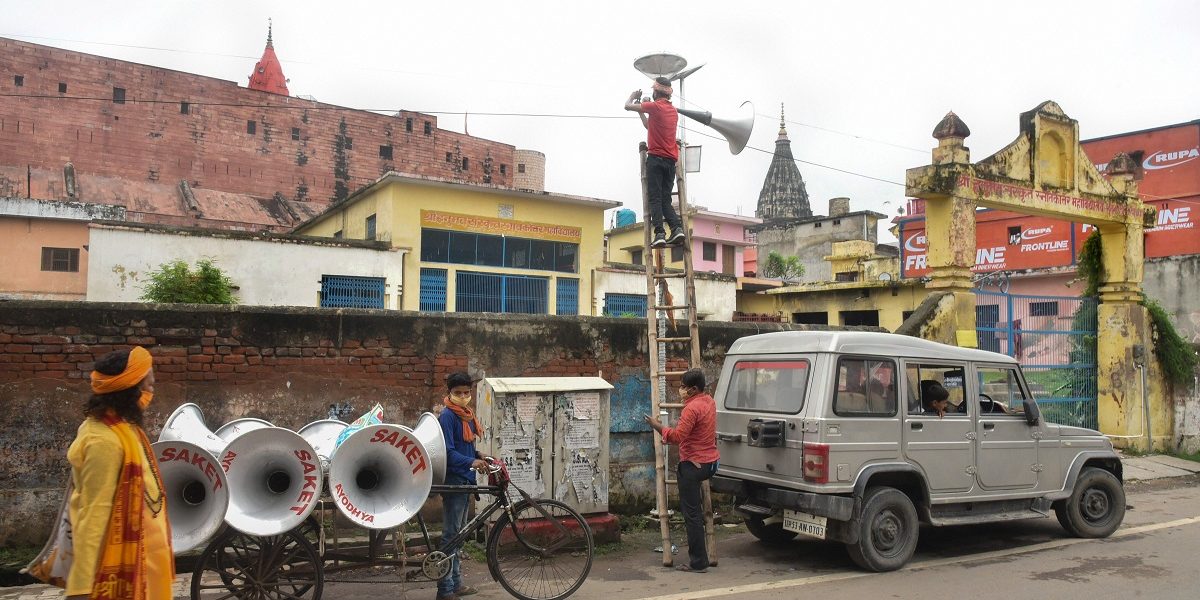 Loudspeakers being installed in Ayodhya ahead of the bhoomi pujan of Ram temple, July 28, 2020. Photo: PTI

New Delhi: With the Ram Janambhoomi Teerth Kshetra Trust – set up to build a ‘grand temple’ at the site where the Babri Masjid was demolished in Ayodhya – readying itself to carry out the bhoomi pujan or the ceremonial start to the temple’s construction on August 5, the district administration has put several conditions on television reporting and panel discussions on the event.

As per news reports, the Ayodhya district administration has asked the news channels who plan to cover the ceremony to give a written undertaking signed by the head of the news organisation that they will not invite any vivadit pakshakar (controversial litigant) for any TV debate and also make no comments on any religion, community, sect or a vyakti vishesh (any specific individual).

An Indian Express news report said, “As per the format devised by the district administration, the undertaking says heads of electronic media houses would be held accountable in case of any law and order situation arising because of a channel.”

The undertaking says, “Kanun vyavastha ko banaye rakha jayega tatha agar kisi prakar se koi garbari hogi to iski jimmedari meri vyaktigat roop se hogi (Law and order would be maintained and if there is anything untoward then it would be my personal responsibility).”

Among other conditions, the administration also sought an undertaking from the news outfits that discussions would be held indoors and not in any public space. Only panellists will have to present during the recording and no audience. The deputy director (information) Murli Dhar Singh told the Indian Express, “Media would have no problem covering the event, all the arrangements are being made. There would be a separate media centre, and live telecast. In order to maintain law and order and considering Covid, news channels would have to take prior permission and ensure there is no public gathering, there is no controversial statement and that proper protocol is maintained.”

So far, no media body has responded to the Uttar Pradesh government’s imposition of these restrictions on news outfits, which transgress media freedom.

In the latest world index on press freedom, India stands at 142, lower than its neighbours Nepal, Bhutan and Sri Lanka.

The Trust, which was set up soon after the Supreme Court verdict last November cleared the decks for the construction of the temple in place of the mosque, has invited Prime Minister Narendra Modi to witness the bhoomi pujan. News reports quoting Swami Govind Dev Giri, the treasurer of the Trust, said the ceremony would take place at noon on August 5 and prior to that, Modi would offer prayers at Hanuman Garhi and the makeshift temple of the idol of Ram Lalla.