Assam: How True Is the Claim That Muslim-Majority Districts Alone Have 'Vaccine Hesitancy'?

An Assam Tribune article published recently used selective data to say that 'vaccine hesitancy' in the state is exclusive to Muslim-dominated districts. 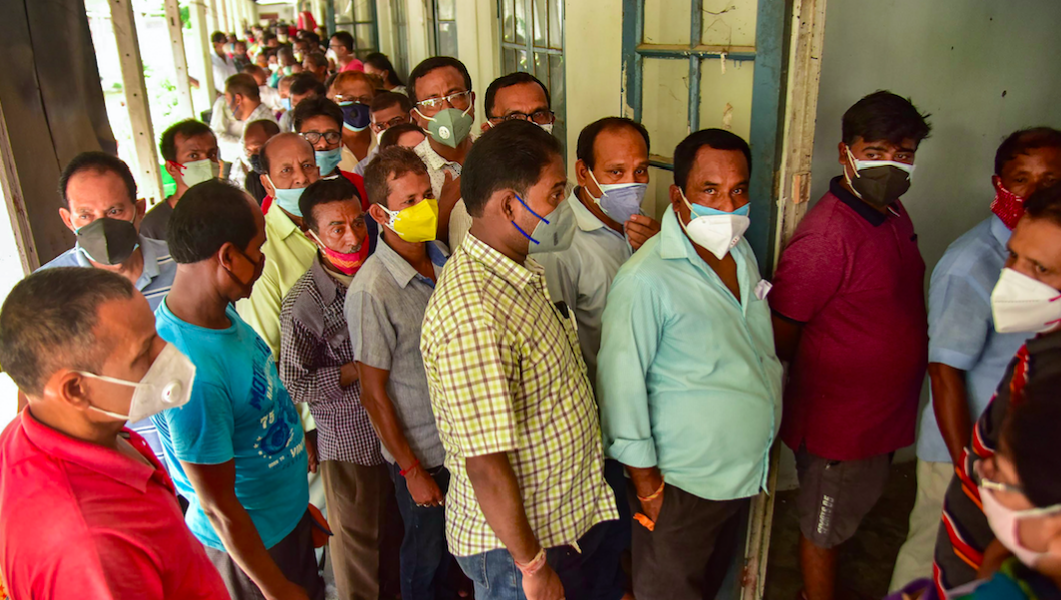 People wait to receive a dose of COVID-19 vaccine at a vaccination centre in Assam's Nagaon district, Monday, May 24, 2021. Photo: PTI

The headline, very clearly, takes direct aim at Assam’s Muslim-majority districts, projecting them as the primary source of “vaccine hesitancy” in the state. The report begins with the premise that “vaccine hesitancy – mostly arising out misinformation and illiteracy – is high” in these districts, which is “impeding government efforts to immunise the population against the novel coronavirus at the earliest possible time.”

The whole report, however, is reductive and selective. It cherry-picks data to argue that there is a serious problem of vaccine refusal in only the Muslim-majority districts of Assam, despite the overall vaccination data being far from conclusive.

The report’s singular emphasis on a particular religion in the headline ends up vilifying a minority community that already gets the short end of the stick in the communal politics in the country.

However, a closer look at the data that the report presents alongside the overall vaccination data published by the government reveals a very convoluted story.

The first data set that the report provides to support its headline is this: “Muslim-dominated South Salmara Mankachar district has recorded only 18,098 beneficiaries so far.”

As per data published on the government’s Co-WIN portal, 20,255 people were vaccinated in South Salmara Mankachar district as of June 12 evening, which is just 3.65% of the district’s total population. This gives the district, which is located along the India-Bangladesh border in western Assam, the unenviable tag of having the least number of vaccinated people in the state. It also has the highest Muslim population share (95.19%) amongst all districts in Assam. A recent Scroll.in analysis delves deep into the various factors driving widespread vaccine refusal in this remote district.

From here, the report confidently asserts that “compared to these districts, the vaccination in other districts has been nearly double”. To substantiate this, it pulls up data from just three non-Muslim majority districts – Kamrup Metropolitan (46%), Jorhat (18%) and Dibrugarh (18%). Strangely, it clubs Majuli, which is a separate district, with Jorhat. As of June 12, Kamrup Metro had coverage of 50.44%, while Jorhat, Dibrugarh and Majuli showed 15.11%, 20.01% and 29.78% of its populations as inoculated, respectively.

While the data captured in the report so far seems to indicate a “vaccine hesitancy” problem in Muslim-majority districts, it does not give the full picture – which begins to get fuzzier once we look at the data from other districts.

Let’s look at the vaccine coverage in the 11 Muslim-majority districts of Assam.

While some of these figures are indeed low, this table shows that there are several Muslim-majority districts in Assam that have a much higher vaccine coverage compared to Dhubri and Nagaon districts, which the report cherry-picks to show “vaccine hesitancy in Muslim-dominated districts.” In fact, some of these districts have coverage higher than several non-Muslim majority districts, as we’ll see in the next table. Thus, it is simply unfair to single out just two districts to make a strong argument about vaccine refusal.

Now, let’s look at the vaccine coverage in the 22 non-Muslim majority districts of Assam. Please note that I am not counting the newly created district of Bajali, as the Co-WIN portal doesn’t classify it separately.

This table shows that there are several districts where Muslims are not in majority that have lesser or nearly equal vaccine coverage as compared to several Muslim-majority districts.

Now, as pointed out earlier, the report argues that “the vaccination in other [non-Muslim dominated] districts has been nearly double” compared to two Muslim-majority districts that it cherry-picks – Dhubri and Nagaon. But as per data on June 12, Table 2 shows that only nine out of 22 non-Muslim majority districts have coverage that is more than double of Dhubri’s coverage, while only five have coverage that is more than double of Nagaon’s. Note that the report is based on slightly older data, but since coverage in all districts has risen by a slim degree since then, the said argument remains conceptually testable.

Also read: Is the Latest Change in India’s Vaccination Policy the Final Twist in the Tale?

Further, in an attempt to keep the spotlight on districts with high Muslim populations, the report picks out four more Muslim-majority districts besides Dhubri and Nagaon to show that “other minority dominated districts too are lagging behind” – Goalpara (10%), Karimganj (9%), Darrang (12%) and Barpeta (13%). By June 12, the coverage in these districts had risen by thin margins and stood at – Goalpara (10.59%), Karimganj (9.84%), Darrang (13.39%) and Barpeta (14.87%).

Finally, let’s look at the ten least vaccinated districts in Assam according to total jabs given as of June 12, alongside their respective Muslim population shares.

Table 3: Least vaccinated districts of Assam (in order of lowest to highest total doses given)

While these are just absolute numbers and do not tell us much about the coverage in each district, they show that Muslim-dominated districts are not particularly lagging behind on vaccination. In fact, Nagaon and Barpeta – which the report singles out to prove its point – are the fourth and fifth most vaccinated districts in all of Assam, respectively. (According to data updated till June 12 on Co-WIN portal, the top three vaccinated districts of Assam are Kamrup Metropolitan, Kamrup and Dibrugarh.)

Therefore, it is too early to assert that the problem of “vaccine hesitancy” in Assam is exclusive to “Muslim-dominated districts”, contrary to what the report’s headline screams out.

In fact, as the report points out, vaccine coverage remains low in several tribal districts too, which do not have high Muslim populations but fall back on critical indices of health literacy, information coverage and road connectivity. Some of these districts, such as Karbi Anglong, are dotted with hills and dense forests, which hinder physical accessibility of health services. But the data remains grossly indeterminate in such areas. For instance, Dima Hasao, which is one of Assam’s hilliest districts, has shown a relatively higher vaccine coverage figure (19.25%).

Thus, it is clear that “vaccine hesitancy” is a multidimensional phenomenon and cannot be reduced to a single religious group. As this SAGE Working Group study argues, it is “complex and context specific, varying across time, place and vaccines” and “is influenced by factors such as complacency, convenience and confidence.”

To reduce such a complex phenomenon into a Muslim-only issue is to add fuel to the fire in the polarised context of Assam – a state with a long history of ethnonationalist hostility towards Bengal origin Muslims. With the coming of the Bharatiya Janata Party (BJP)-led government in the state 2016, which was re-elected with a comfortable majority in 2021, the anti-Muslim sentiment has only been growing in scope and intensity.

Keeping in mind the political climate of the state, news reports ought to be written (and headlined) with a certain degree of sensitivity and added caution, so as to prevent anti-minority rhetoric from boiling over.