Journalist Nazrul Islam has filed a complaint at a police station after Pijush Hazarika threatened to 'drag him out to the streets' over a report on his wife's speech. Nazrul Islam, a correspondent for the television news channel Pratidin Time has filed an FIR at the Jagiroad police station against the minister of state (independent charge) of urban development, health and family welfare . The incident took place on Thursday, April 1.

In the nearly six-minute clip, Hazarika who is an MLA from the Jagiroad constituency in Assam’s Morigaon district is heard telling Islam that “he will break his legs and drag him out to the streets.” Jagiroad went to polls on Thursday as part of the second phase of the state’s assembly elections.

Also read: Day 2 of Assam Polls: What Makes These 8 Constituencies the Most Crucial?

The reason behind Hazarika’s outburst is reportedly a video clip that was circulated widely, which he accused Islam of having misreported.

The video showed Hazarika’s wife and actor Aimee Baruah making a speech in an election campaign rally addressing a crowd of mostly Bengali Hindus. There, she reportedly said, “CAA in simple terms means that these people…the Bengali Hindu people who have lived in Assam for a long time with us…if these people won’t follow or support the CAA they will be driven out not just from Assam but from India as well. You have to stay in Assam and in India. We want CAA and we need CAA and you have to stay here.”

Hazarika accused Islam of twisting this part while reporting on Baruah’s video clip. 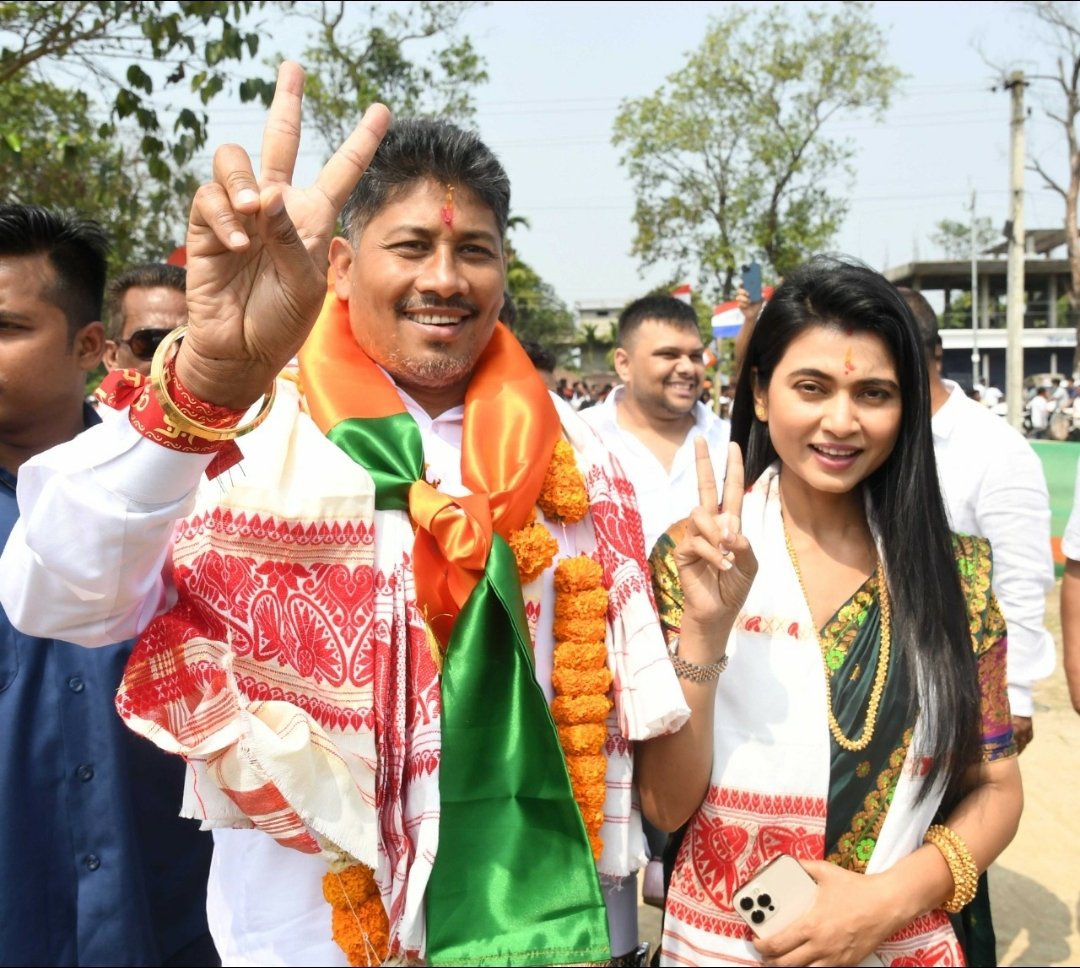 Hazarika and Baruah on the campaign trail. Photo: Twitter/@aadityagautom

Later, Baruah told reporters that her statement had been misunderstood and also apologised if she had hurt anyone’s sentiments.

Meanwhile, Hazarika reportedly called Islam over the airing of Baruah’s video clip and accused him of conspiring and colluding with Congress and its ally, AIDUF.

Hazarika could also be heard referring to Islam as ‘miya’ – a derogatory term for Assam’s Muslims. He also accused Islam of taking part in ‘miya politics’.

Also read: Interview | There is a Conspiracy to Show Bengal-Origin Muslims as Anti-Assamese: Hafiz Ahmed

Hazarika said he was hurt and that Islam and another reporter “cannot be saved” in the aftermath of the airing of the clip. He also said Islam’s employer Pratidin Time will not be able to save him either and that he will be taught a lesson and his life will be made miserable.

Opposition parties and Assam’s journalists have condemned the incident severely and called on national journalists’ bodies to take the matter up.

Islam told The Wire that he was on the road and at work on election day when he got the call from Hazarika’s personal assistant.

“I took the call and the personal assistant told me that Hazarika would like to talk to me. Immediately there was this barrage of threats, warnings, and slangs. He called me a ‘miya’ and accused me of ‘miya politics’. The slangs he used were really offensive,” he said.

“I am a journalist and what happened to me is an insult to journalists everywhere. I had no option but to file an FIR against Hazarika. I have been provided with security after the incident,” he added.

Snit Kumar Bhuyan, senior associate editor of Pratidin Time, told The Wire that such an incident where a minister threatens a journalist is dramatic enough for cinema.

“We have seen such things in films but they have never happened in Assam. The minister has imported this culture to Assam. If something happens to the reporter who will be responsible? Journalists have to work in the most difficult of circumstances and are doing a public service in providing the news and truth. This is reprehensible behaviour from a politician who also happens to be a minister. What kind of message is he trying to send?” Bhuyan said.

The Gauhati Press Club issued a statement on Thursday condemning the incident. The statement said:

“The audio clip where Minister and BJP candidate from Jagiroad constituency Pijush Hazarika is reportedly heard intimidating a television journalist over the phone for airing a news report is highly condemnable and cannot be condoned at any cost. The Gauhati Press Club, while condemning the act of intimidation in the strongest words is further of the opinion that it is very unbecoming of a public representative to threaten a journalist of dire consequences, no matter what. At a time when the protection of journalists has become a cause of concern, such an uncalled-for attitude by a public representative comes as a shocker.”

The Assam Pradesh Congress Committee has already submitted a memorandum to Nitin Khade, the Chief Electoral Officer, alleging that Hazarika’s behaviour was a violation of the model code of conduct.

The leader of opposition in the state legislative assembly Debabrata Saikia told The Wire, “The kind of language that Hazarika used is something which is not only unparliamentary but below the standards of human decency. This exposes the dictatorial traits of the BJP. This was a textbook case of bullying.”

Note: This report has been edited since publishing to include details on Aimee Baruah’s speech.