The newspaper owners claimed that no notice of cancellation or eviction was served on them and "nothing in writing" was given to them. 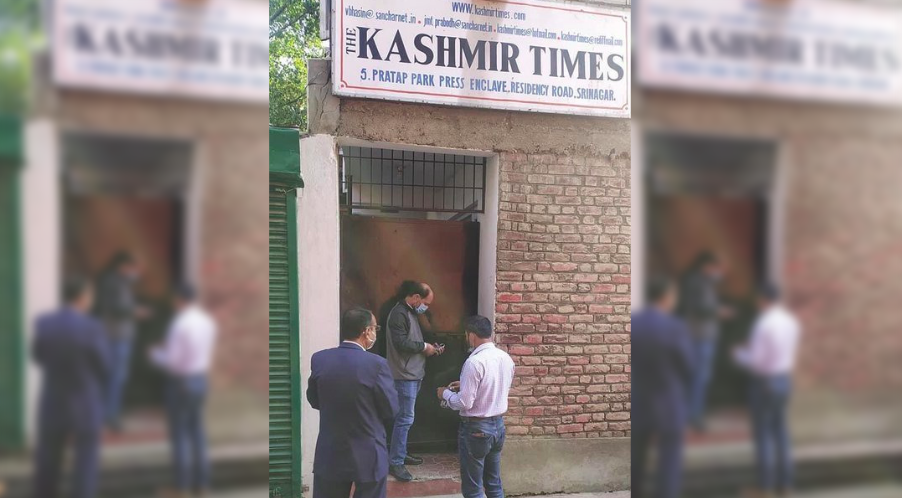 New Delhi: Authorities on Monday sealed the Srinagar office of the Kashmir Times, a prominent daily in Jammu and Kashmir, without offering any reasons behind such government action.

The paper’s owner Anuradha Bhasin tweeted on the sudden closure and said the entire lack of due process pointed to vendetta. Bhasin had been instrumental in taking a petition on the curbs under which Kashmiri journalists had been working since the reading down of Article 370, to the Supreme Court.

Today, Estates Deptt locked our office without any due process of cancellation & eviction, same way as I was evicted from a flat in Jammu, where my belongings including valuables were handed over to “new allottee”. Vendetta for speaking out! No due process followed. How peevish! pic.twitter.com/J5P0eKxvbx

The office had been that was allotted to Kashmir Times in a government building at at Press Enclave in Srinagar.

While officials confirmed to PTI that the Estates Department sealed the office on Monday, they gave no reasons for it.

The English daily is headquartered in Jammu and is published from both the regions of the Union Territory.

To PTI, Bhasin echoed the facts aired in her tweet. “No notice whether of cancellation or eviction was served to us,” Bhasin told the news agency over phone.

Also read: Kashmiri Editors Can’t Use Fear as an Excuse for Their Continued Silence

Bhasin also said that they had heard murmurs about the government planning to evict them from the building a month back, but there was no formal communication from the Estates Department.

“We had approached the Estates Department and asked them to please serve us the order, but they gave us nothing. Then we approached the court, but no order has been given even there,” she said.

She said the locking up of the Srinagar office of the newspaper was something similar to her recent eviction from a flat in Jammu.

“The government has the right to evict an allottee, but there is a certain criteria and they have to follow the due process. However, due process has not been followed in my particular case,” she added.

Bhasin termed the move as “vendetta” against her “for speaking out against the government and moving the Supreme Court against media restrictions in Jammu and Kashmir after the Centre read down Article 370 in August last year.”

“The day I went to court last year, that very day, the state government advertisements to Kashmir Times were stopped,” she said.

This is the latest in the yearlong muzzling of Kashmir’s journalists that the government has been responsible for through several acts of legislation, curbs (including on the internet, which is still 2G in the UT) and often, criminal cases against prominent journalists and their harassment in the hands of police. Reports on the latter can be found here, here, here and here.

Bhasin had been openly critical of all of the above, and what she recognised was purported submission to these by Kashmiri media.

Writing for The Wire this September, Bhasin had said, “While many professionals have struggled to keep the news alive and ward off any attempts to suppress the flow of information despite a communications blockade in place, multiple forms of intimidation and the launching of an Orwellian Media Policy 2020, the Valley’s leading newspapers have chosen to keep their publications alive by killing news stories and burying all morals of journalism.”

The Network of Women in Media, India (NWMI) condemned the “targeting and harassment” of Bhasin and stood in solidarity with her. Noting that Bhasin has been critical of the Centre’s “tough policies in Kashmir”, the group said the “deliberate targeting” of Bhasin and other journalists in Kashmir through different means reveal the “continuing intimidation of journalists” in the region.

“We demand that the authorities stop harassing and thereby attempting to silence critical voices.  Journalists, including Anuradha Bhasin, must be allowed to work freely, without being intimidated or under the constant threat of being summoned or booked under stringent laws that leave little room for the pursuit of justice,” a statement by NWMI said.

Note: This article was first published on October 20 and updated with details of the NWMI statement at 10:20 am on October 21.