Andhra Jyothy published a front-page report claiming that the Lokniti CSDS had projected TDP's return to power. The research institute has called it "fake news".

New Delhi: Lokniti – Centre for the Study of Developing Societies (CSDS) has called out a Telugu media outlet after it published a ‘fake survey’ attributed to the research institute that predicted the ruling Telugu Desam Party (TDP) would return to power in the state.

With AP scheduled to have Lok Sabha and assembly elections simultaneously on April 11, the Andhra Jyothy newspaper carried a first page report on Monday saying that N. Chandrababau would seize a second term as chief minister. It said a survey by Lokniti predicted that the TDP would win 126-135 seats in the assembly, with the YSR Congress party getting 45-50. The state has 175 assembly constituencies. 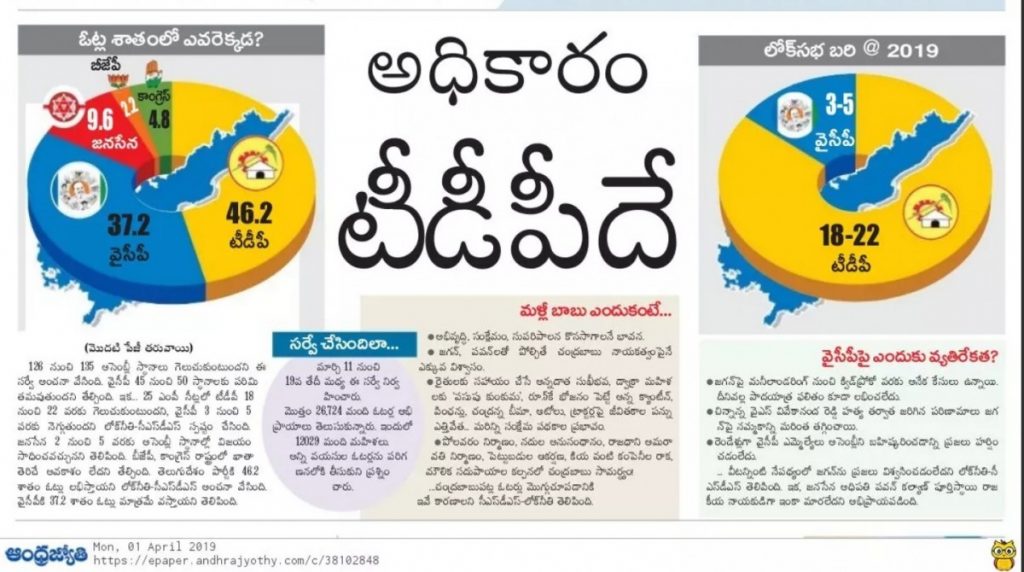 A screenshot of the report that claimed to be based on the Lokniti survey.

In response, the Lokniti-CSDS issued a statement clarifying that it had not conducted any survey in Andhra Pradesh.

Some social media platforms and print media have circulated findings of survey purported to be made by Lokniti-CSDS in Andhra Pradesh projecting vote shares and seat shares. Lokniti wishes to clarify that it has not done any survey in Andhra Pradesh, that it was not associated with any such survey, that it has not placed in public domain any reported findings and the news that is being circulated is mischievous and malafide.

The institute added that “it is in no way responsible for the fraudulent reporting and findings about the so-called survey”.

The media outlet has been accused of being a “mouthpiece” of the TDP. The opposition party, YSR Congress party, has banned Andhra Jyothy from its press briefings and interactions, calling it “biased”.

Y.S. Jagan Mohan Reddy has referred to some sections of the media as ‘yellow media’, hinting that they are close to the TDP (which uses the colour for its flags).

Recently, the party also banned TV5 from its press interaction. It also notified the channel that its representatives or spokespersons would not participate in any of its programmes.

Biases in Telugu media are plenty, with virtually every party having a “mouthpiece” media outlet. Jagan himself owns Sakshi media group, which publishes a newspaper and also runs a 24-hour news channel. A report in The Hoot pointed out that several politicians own or control media houses.