This isn't the first time that stories critical of BJP leaders have suddenly vanished from news websites. New Delhi: A story about Bharatiya Janata Party president Amit Shah’s links to a district cooperative bank which netted the highest deposits among such banks of old Rs 500 and Rs 1,000 notes that were abruptly demonetised on November 8, 2016, was taken down by the websites of Times Now, News18.com, Firstpost and New Indian Express on June 21, without offering any clarification.

So far, no explanation has been given by the editors of the news websites for pulling down the story. News18.com and Firstpost are both run by Reliance Industries’s Network 18 group. 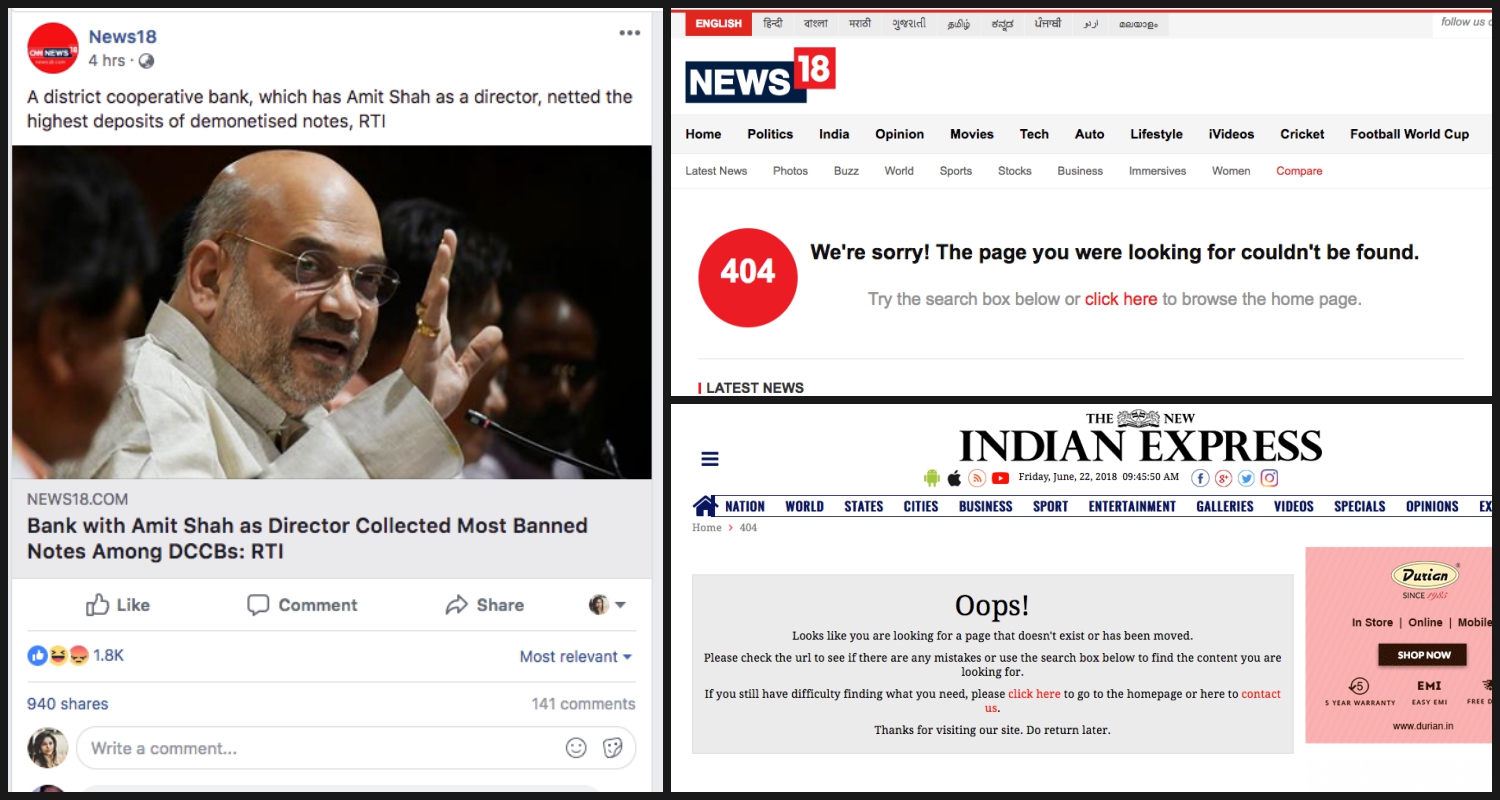 The story by news agency IANS reported that the “Ahmedabad District Cooperative Bank (ADCB) secured deposits of Rs 745.59 crore of the spiked notes – in just five days after Prime Minister Narendra Modi made the demonetisation announcement. All the district cooperative banks were banned from accepting deposits of the banned currency notes from the public after November 14, 2016 – five days after demonetisation – on fears that black money would be laundered through this route.”

The story is based on information given by the Chief General Manager and Appellate Authority, S. Saravanavel, of the National Bank for Agriculture & Rural Development (NABARD) in response to an RTI filed by Manoranjan S. Roy. 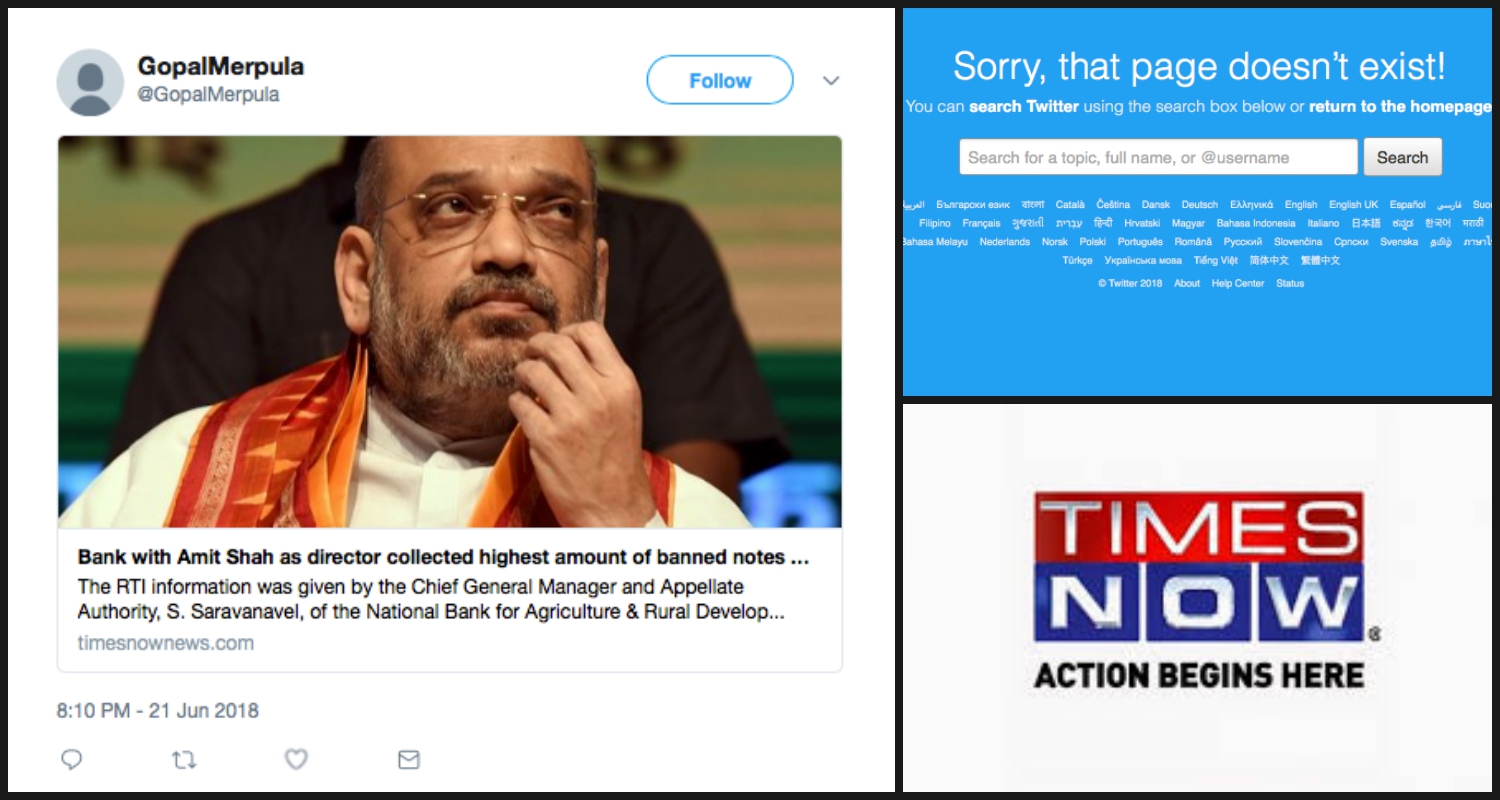 In a response to The Wire, Prabhu Chawla, editorial director of the New Indian Express, passed the baton to the paper’s editor G.S. Vasu. “Editor of the newspaper takes final call on all editorial matters,” he wrote.

The Wire has sent questionnaires to editors of News18.com, Firstpost and New Indian Express, and this story will be updated as and when they respond.

This isn’t the first time that stories critical of BJP leaders have suddenly vanished from news websites. In July 2017, a story carried by the Times of India’s Ahmedabad edition about an apparent increase of “300%” in BJP president Amit Shah’s assets over the past five years, was removed from the the paper’s website within hours of being published.

The story also noted that textiles and information and broadcasting minister Smriti Irani has clarified in her affidavit that she has not yet completed her Bachelor of Commerce course. Similar news items published on July 29 by DNA‘s print edition and Outlook Hindi’s website were also deleted from their respective websites without any clarification.

A few months later, a story carried by the TOI‘s Jaipur edition criticising the Narendra Modi government’s Pradhan Mantri Fasal Bima Yojana on September 14, 2017, was taken down from the newspaper’s website within hours of publishing.

Ironically, a report on India’s low ranking on the World Press Freedom index was pulled down from the TOI and ET websites in May. When News Laundry contacted the then TOI.in editor Prasad Sanyal, to know why they decided to pull down the article, they were informed that it was the media house’s ‘editorial prerogative’.