No explanation has been given and no editor is willing to take responsibility for having pulled the plug on the news item. 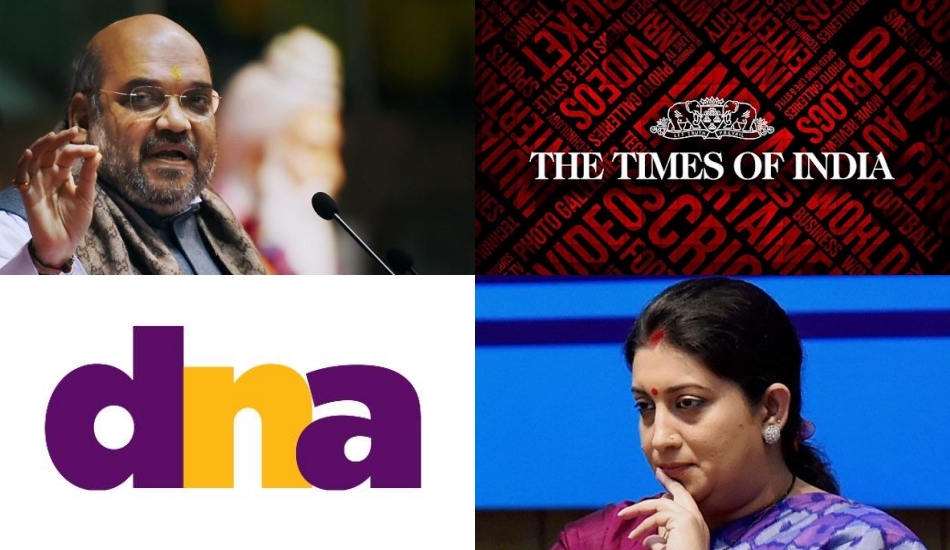 New Delhi: A story carried by the Times of India’s Ahmedabad edition about an apparent increase of “300%” in BJP president Amit Shah’s assets over the past five years was removed from the the paper’s website within hours of being published on Saturday. No explanation has been given and no editor is willing to take responsibility for having pulled the plug on the news item.

The story, which reported how Shah’s assets had grown by 300% between 2012 – when he last filed a declaration as part of his nomination papers for the Gujarat assembly election – and 2017, also noted that textiles and information and broadcasting minister Smriti Irani has clarified in her affidavit that she has not yet completed her Bachelor of Commerce course. 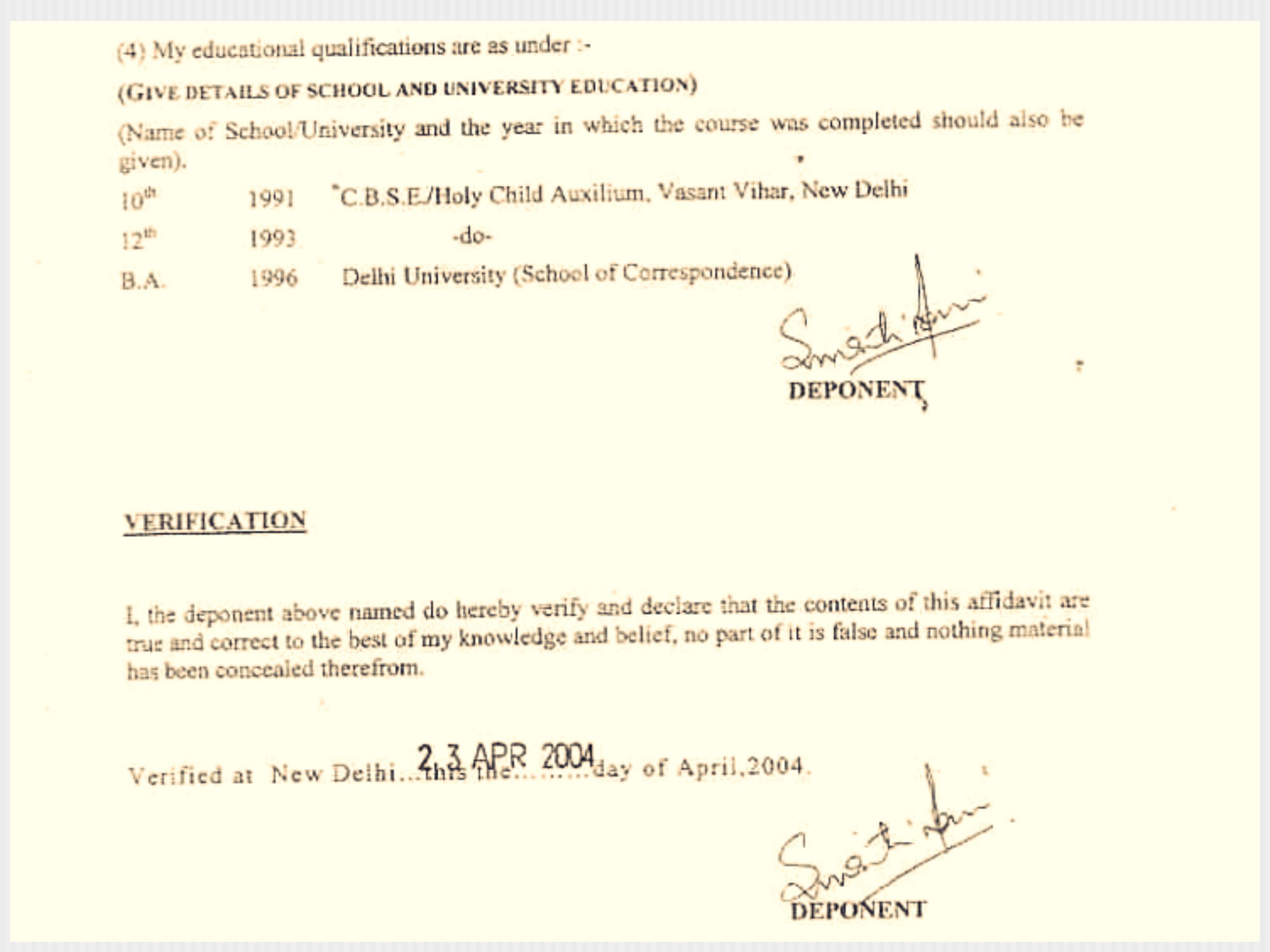 Excerpt from Smriti Irani’s 2004 election affidavit. The full affidavit may be accessed at the ADR website.

In her 2014 election affidavit for the Lok Sabha seat, when she fought against Congress leader Rahul Gandhi at Amethi, she had entered, under the education qualifications column, ‘B. Com. Part 1, School of Correspondence, Delhi University, 1994’.

The Times of India story was also initially carried by the websites of the TOI‘s sister publications Navbharat Times (NBT) and Economic Times (ET) before being taken down from there too.

Times of India editors whom The Wire contacted said they had no information about the article but also requested that they not be identified. A message to the top management of Bennet Coleman and Company Ltd, which owns the newspapers, remained unanswered at the time of publication of this story. 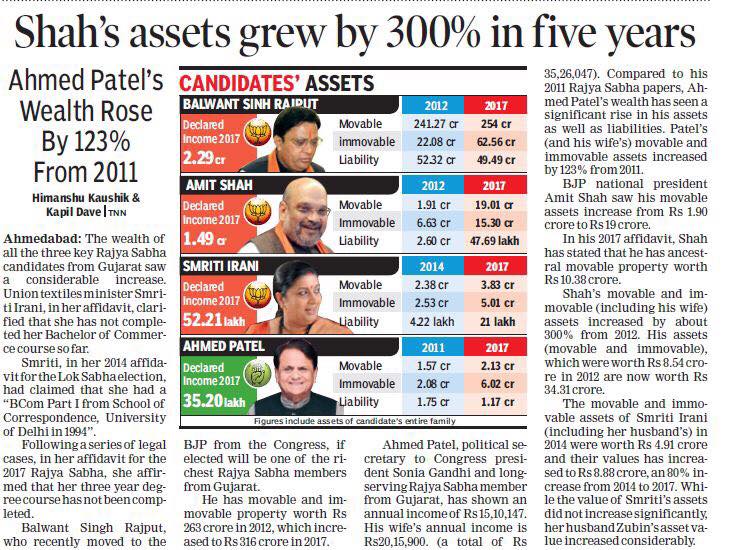 The Times of India (Ahmedabad edition) story which mysteriously vanished from the newspaper’s websites on Saturday.

The information about Shah’s assets and the latest iteration of Irani’s controversial educational qualifications was acquired from public affidavits filed by Shah and Irani, who are contesting for the Rajya Sabha from Gujarat.

Affidavits filed by Shah in 2012 and 2007 also showed an increase of over Rs 6 crore in his assets during that 5-year period.

In a sign that TOI pulled the Shah-Irani story in response to external ‘stimulus’ and not internal review, similar news item published on July 29 by DNA‘s print edition was also deleted from its website.

The story is, however, still available in DNA’s e-paper: 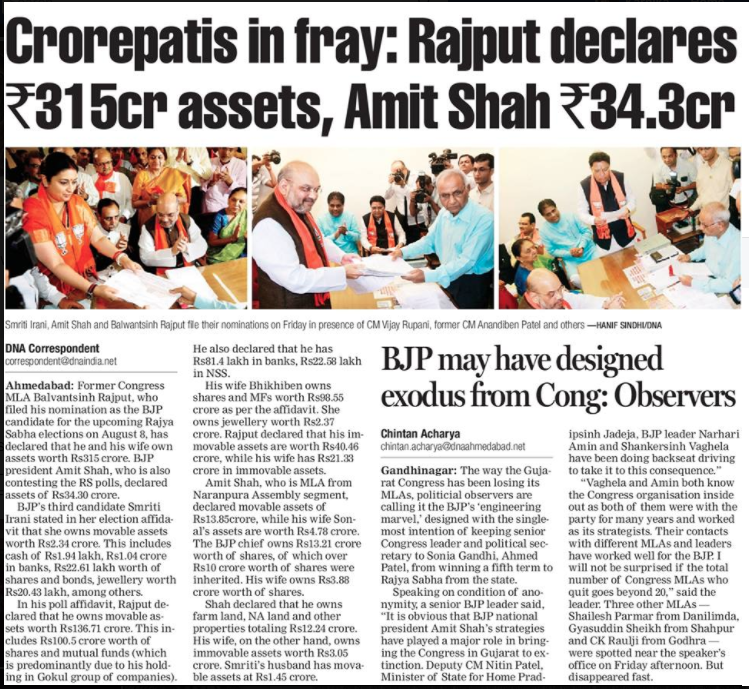 Clip of story on Amit Shah’s assets which appeared in DNA on Saturday, July 29, 2017.

This isn’t the first instance of the Times Group deleting stories without informing its readers of the reasons. Ironically, a report on India’s low ranking on the World Press Freedom index was pulled down from the TOI and ET websites in May. When News Laundry contacted the then TOI.in editor, Prasad Sanyal, to know why they decided to pull down the article, they were informed that it was the media house’s ‘editorial prerogative’.

Amit shah should explain How his property increased by 300% in 5 years ? What business he is doing ? https://t.co/QTALZCOtAn

The story still displays on mobile phones via Google’s accelerated media pages (AMP) but searching for a string of text from the AMP version generates a headline in Google News and a link to the Outlook Hindi site which displays an error. Has the piece been pulled? Is the piece that Google AMP is showing a checked version? Outlook Hindi editor Harvir Singh told The Wire on Sunday afternoon that he was not aware of any issue with the link and said he would revert after checking with his technical team. One day later, the Outlook Hindi web link was still not working. 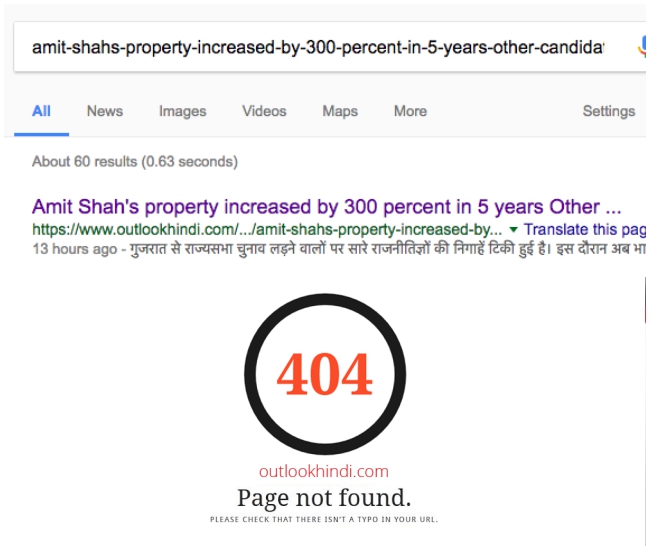 The actual affidavits of Shah and the others have not yet been uploaded on the website of the chief electoral officer, Gujarat, as is the normal practice.

The Wire has also learned that TOI decided to delete its tweets and Facebook posts alerting readers to another story involving Smriti Irani: ‘PIL accuses Smriti Irani of fraud in MPLAD funds’. Irani is believed to have objected to the story, which appeared on July 27, 2017.

Last week, the Hindustan Times took down an opinion piece published on its website by one of its highly-regarded columnists, Sushil Aaron. The article, which was sharply critical of the effect the Modi government has had on India’s ability to deal with pressure from China, was restored after a social media backlash. A query from The Wire to the newspaper’s owner-editor, Shobhana Bhartia, on the day the article was deleted went unanswered.

Note: As this is a developing story, updates in terms of responses from the editors or publishers of Outlook, TOI and DNA will be added when they become available. Since the Outlook Hindi link still opens on mobile phones and there is ambiguity about whether it has been pulled, this article’s original headline, which said Outlook had also deleted the  story, has been suitably edited.

Note: Outlook Hindi is published by the Outlook group but the editor of Outlook magazine is not responsible for its content