That Malviya has not taken down his tweets despite multiple fact-checks shows not only a blatant disregard for the truth but also an intent to mislead. 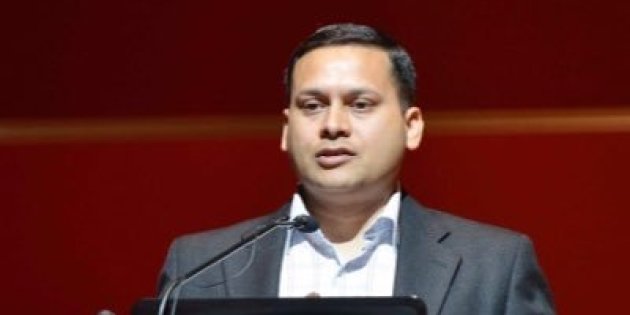 On January 15, 2020, Amit Malviya, national in-charge of the Bharatiya Janata Party’s (BJP) IT cell, shared a video of a random group of persons insinuating that the women of Delhi’s Shaheen Bagh are protesting against the Citizenship Amendment Act (CAA) for money. His allegation was found baseless by a collaborative Alt News-Newslaundry investigation. But this hardly discouraged Malviya.

Two days hence, he shared a photograph of an elderly man eating biryani at Shaheen Bagh. In a bizarre tweet, Malviya wrote, “Proof of Biryani being distributed at Shaheen Bagh!” Was the BJP leader alluding that the act of eating food at a protest site is an offence or morally incorrect? Should the protesters be participating on empty stomachs? Only he can answer.

Proof of Biryani being distributed at Shaheen Bagh! pic.twitter.com/ylwnjJr2oy

Malviya’s misleading tweets are not limited to Shaheen Bagh. Alt News has been monitoring his social media presence for a while now and has found that he repeatedly uses misinformation to discredit individuals, communities, opposition parties, leaders and movements. With him being the official ring leader of BJP’s online propaganda machinery, the misinformation promoted by Malviya has a dangerous ripple effect. His false claims are echoed by party members and supporters of the BJP thus giving rise to large-scale misinformation campaigns.

On December 28, 2019, Malviya tweeted a video of anti-CAA protest at Lucknow’s Clock Tower and claimed that ‘Pakistan Zindabad’ slogans were raised in the rally.

Since this is a season of pulling out old videos, here is one from Lucknow where anti-CAA protestors can be seen raising ‘Pakistan Zindabad’ slogans… Damn! Someone needs to have a samvaad with them and ask them to carry tricolour and Bapu’s picture for the cameras next time… pic.twitter.com/Lvg7sj2G9Z

The complete fact-check can be read here.

A video of Aligarh Muslim University (AMU) students protesting against the Citizenship Amendment Act was circulated on social media with a claim that they raised slogans against Hindus. Among those who shared it was Malviya.

If this is the mindset that pervades in these ‘minority’ institutions, imagine the plight of Hindus and other minorities in Pakistan, Bangladesh and Afghanistan… pic.twitter.com/VRNeOyhaHY

Are you listening;
All the way from AMU.
Long Live AMU#AMUrejectscab#CABBill2019#CitizenshipAmendmentBill pic.twitter.com/WN77Kwvcz9

“The Islamists want CAA protests to be ‘inclusive’ only till the time you, the non Muslims, start accepting their religious identity, beliefs and supremacist slogans as gospel,” tweeted BJP IT cell head Amit Malviya while sharing a video of journalist Arfa Khanum.

The Islamists want CAA protests to be ‘inclusive’ only till the time you, the non Muslims, start accepting their religious identity, beliefs and supremacist slogans as gospel… Long live the dream of ‘Ghazwae-Hind’! pic.twitter.com/va564eghL8

The speech delivered by Arfa Khanum at Aligarh Muslim University was clipped and misrepresented. They claimed that the journalist was promoting the establishment of Islamic society and urging protesters to maintain a pretence of support to non-Muslims until such a society is created. However, Khanum was stating the complete opposite. She urged protesters to not use religious slogans to maintain the secular character of the movement.

Also read: How the BJP Spun a ‘Swastika’ out of a Nazi Symbol to Discredit Anti-CAA Protests

1. Attempts to portray Nehru as an immoral man

In 2017, the BJP leader had shared a collage of images of first Indian prime minister Jawaharlal Nehru with women. Most of the photographs were of the former PM with his sister or niece. Malviya later took down his tweet but this hardly stopped others from sharing the collage. 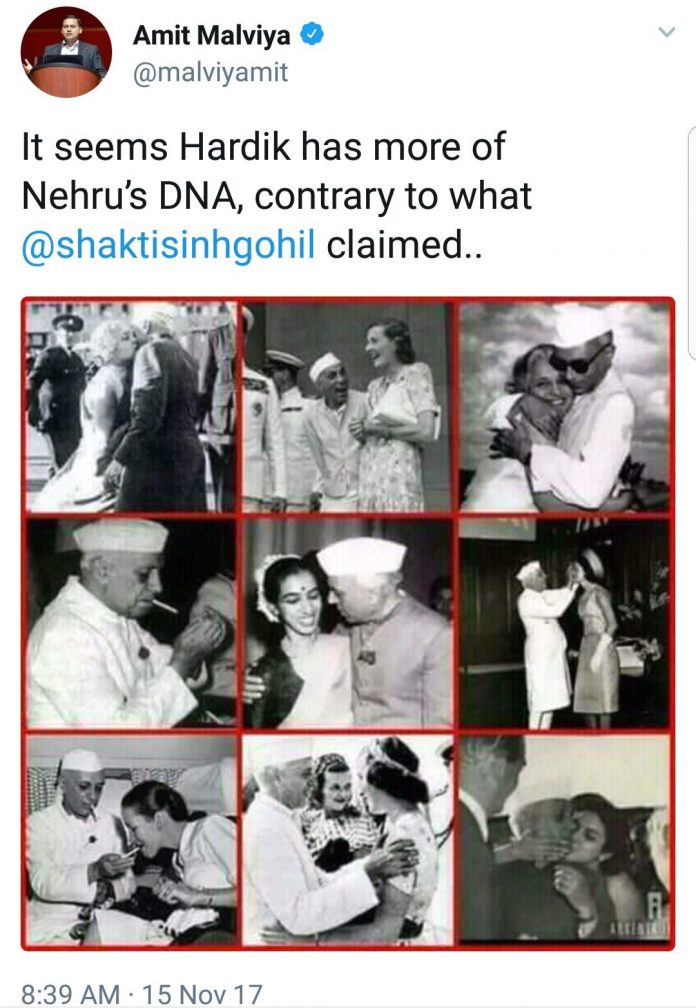 Amit Malviya tweeted a video of Dr Manmohan Singh on November 27, 2018, where the former PM can be heard saying, “The Governments of Madhya Pradesh and Chhattisgarh were very good.” This clip seemed to suggest that Singh was appreciating the BJP state governments.

3. Falsely claimed that Rahul Gandhi signed the Somnath temple register as a non-Hindu

Congress is one of the favourite targets of Malviya. In another tweet from 2017, he had claimed that then party president Rahul Gandhi had signed the register at Somnath temple as a ‘non-Hindu’.

Ambassador Meera Shankar, UPA’s representative in US, had referred to Sonia Gandhi as a Christian leader. The reference was soon deleted. Now Rahul Gandhi declares he is a non-Hindu but their election affidavits claim that they are Hindus. Gandhis lying about their faith? pic.twitter.com/iFE4AhVnRM

However, handwriting analysis showed that the handwriting in the register did not match with Gandhi’s publically available handwritten notes. People are sending this to me and asking in disbelief if he actually said this.. Of course he did! pic.twitter.com/rgdTf26ARv

This was a clipped video of a much longer speech where Rahul Gandhi was actually taking a dig at PM Modi during an address in Gujarat’s Patan on November 12, 2017. The complete video was uploaded on the Congress president’s YouTube channel where at 17:50 minutes he can be heard saying, “कुछ महीने पहले यहाँ बाढ़ आयी ५०० करोड़ रुपये दूंगा, (पीएम मोदी ने) एक भी रूपया नहीं दिया. आलू के किसानो को कहा ऐसी मशीन लगाऊंगा इस साइड से आलू घुसेगा उस साइड से सोना निकलेगा…मेरे शब्द नहीं है नरेंद्र मोदीजी के शब्द है. (A few months ago there was a flood here and he (PM Modi) said he will give Rs 500 crore but not even a rupee was given. He told potato farmers, will install such a machine that if a potato is inserted from one end, gold will come out from the other end…these are not my words but Narendra Modiji’s words.)” 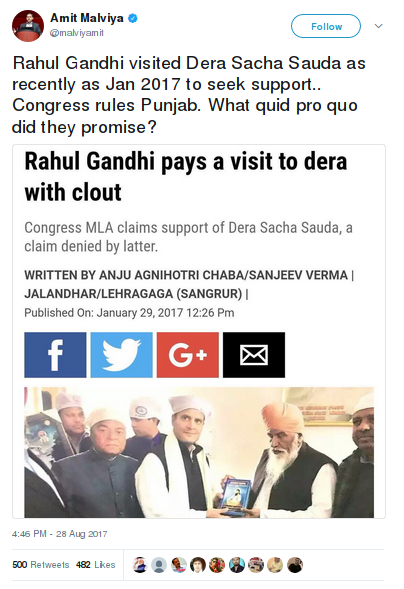 The screenshot of the article that Malviya posted is originally an Indian Express article dated January 29, 2017. The article states, “With just a week to go for the Punjab Assembly elections, AICC vice-president Rahul Gandhi Saturday visited Dera Sach Khand Ballan in Jalandhar, the biggest and the most influential among the Dalit Ravidassia community.” Gandhi did not visit Dera Sacha Sauda but Dera Sach Khand Ballan, whose head is Sant Niranjan Dass and not Gurmeet Ram Rahim Singh.

1. Misinformation ahead of 2019 Delhi elections

A video of Delhi chief minister Arvind Kejriwal was shared by Amit Malviya ahead of 2019 Delhi elections. He claimed that a man was lynched at a Kejriwal roadshow.

AAP workers indulge in brutality, lynch a man in Arvind Kejriwal’s road show, who remains a mute spectator, doesn’t intervene, goes around his program as if nothing is happening…

Is this man even fit to be in public life let alone occupy a public office?pic.twitter.com/baYVtrY7Qi

Malviya did not tweet the complete picture. Other clips from the video show that Kejriwal was slapped by a person who was then thrashed by the CM’s supporters. Contrary to social media claims, the man was not lynched. However, he was brutally beaten.

Arvind Kejriwal slapped by a man in west Delhi. Act caught on camera. The man, Suresh, was then assaulted by AAP volunteers.

2. Misinformation ahead of polling in West Bengal during 2019 Lok Sabha elections

Ahead of the Lok Sabha 2019 elections, Malviya tweeted an alleged ‘first-person’ account of a student of Vidyasagar College about the violence that erupted in the campus during BJP chief Amit Shah’s rally. The ‘student’ blamed the Trinamool Congress (TMC) for vandalising the bust of Ishwar Chandra Vidyasagar inside the varsity campus.

First person account of a student from Vidyasagar College. Original post in Bangla and translation alongside. He recounts how TMC hooligans orchestrated vandalisation of Ishwar Chandra Vidyasagar’ bust inside the college for their petty politics. #SaveBengalSaveDemocracy pic.twitter.com/OWA79RTjbw

Incidentally, the same message was shared by numerous other individuals in the first person. The circulation of the identical message was also noticed by Twitter users. One of them sarcastically wrote, “Today, entire Facebook is ‘I am a Vidyasagar student’.”

Alt News published an investigative report after analysing visuals of the violence and speaking with faculty members and students of the college. We found that the allegations raised in the post shared by Malviya were misleading.

In the aftermath of the Telangana assembly elections in 2018, in which the BJP suffered a setback, Malviya tweeted that the party, despite having a 7% vote share in Telangana managed to win just one seat, whereas the Owaisi led AIMIM with a vote share of merely 2.7% bagged 7 seats in the election.

In Telangana, AIMIM with just 2.7% vote share won 7 seats but BJP with 7% got just won. Let that sink in.

While the numbers cited by Malviya were correct, the claim was misleading. This is because while the AIMIM had a vote share of 2.7%, the party had contested on merely 8 seats, of which it won 7. On the other hand, BJP had contested 118 out of 119 seats in the state assembly. AIMIM thus has a far superior strike rate of 87.5% (7 out of 8) in comparison to the BJP’s dismal strike rate of 0.85% (1 out of 118). The complete details are available on the website of the Election Commission.

Misinformation in support of PM Modi

1. Falsely claimed PM Modi is the first ‘head of the state’ to visit Kumbh

Prime minister Narendra Modi took a holy dip in the Ganges in the Kumbh Mela in Prayagraj, Uttar Pradesh on January 24, 2019. Soon after, Malviya tweeted that PM Modi is the “first head of state to visit Kumbh in all these years.” 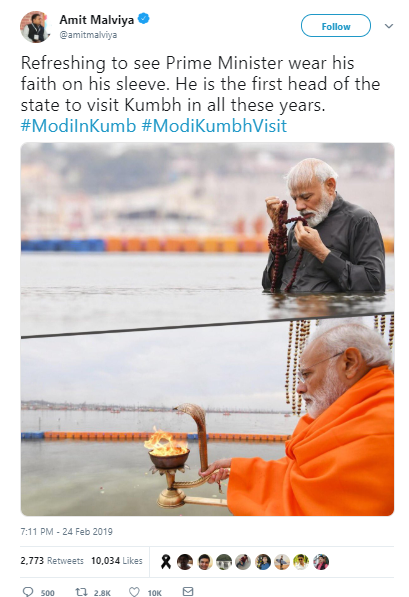 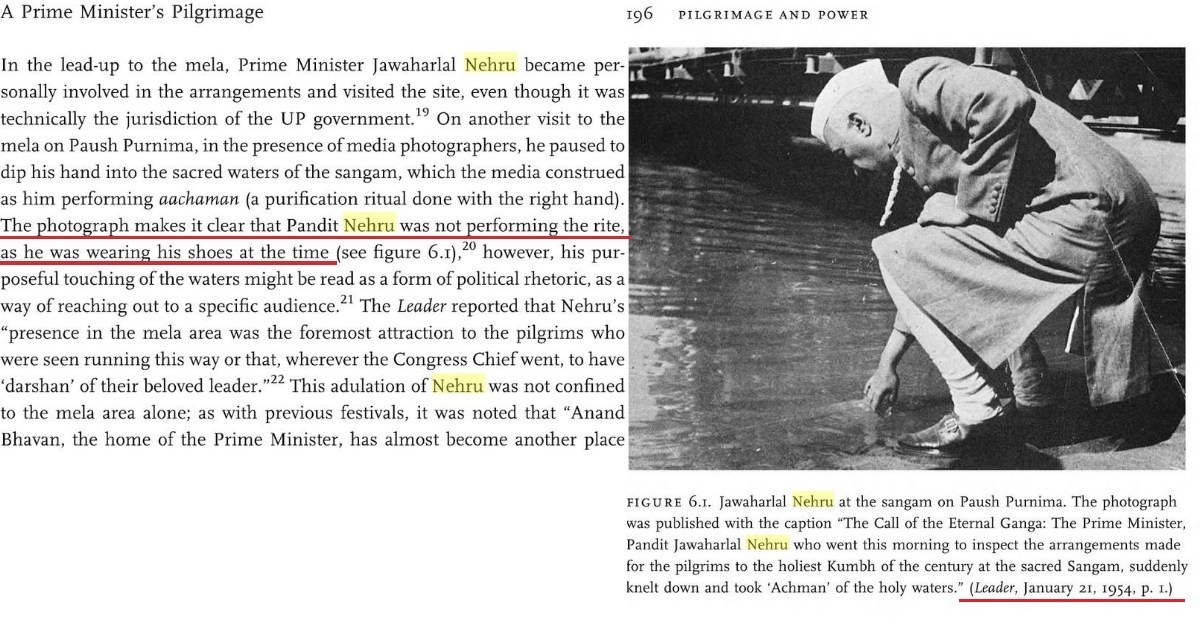 2. Attempt to use Nobel winner’s name to endorse demonetisation

The BJP IT cell head claimed that Richard Thaler, the winner of the 2017 Nobel Prize in Economics, praised demonetisation. 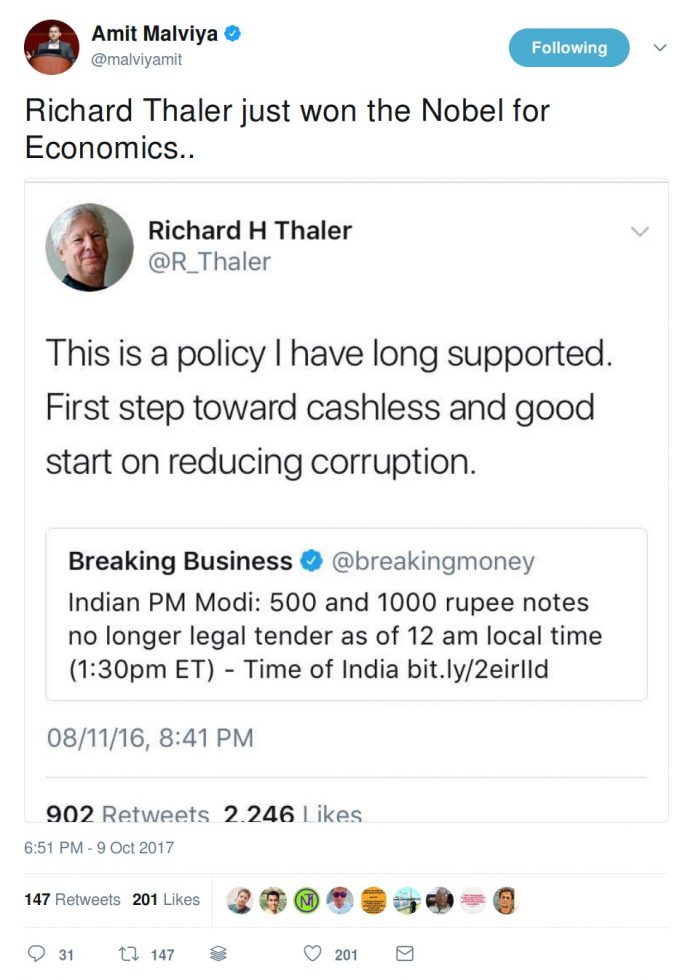 ”Really? Damn.“, tweeted Thaler when he was told about the introduction of Rs 2000 note in place of the discontinued Rs 500 and 1000 notes. Malviya’s tweet did not include this bit. 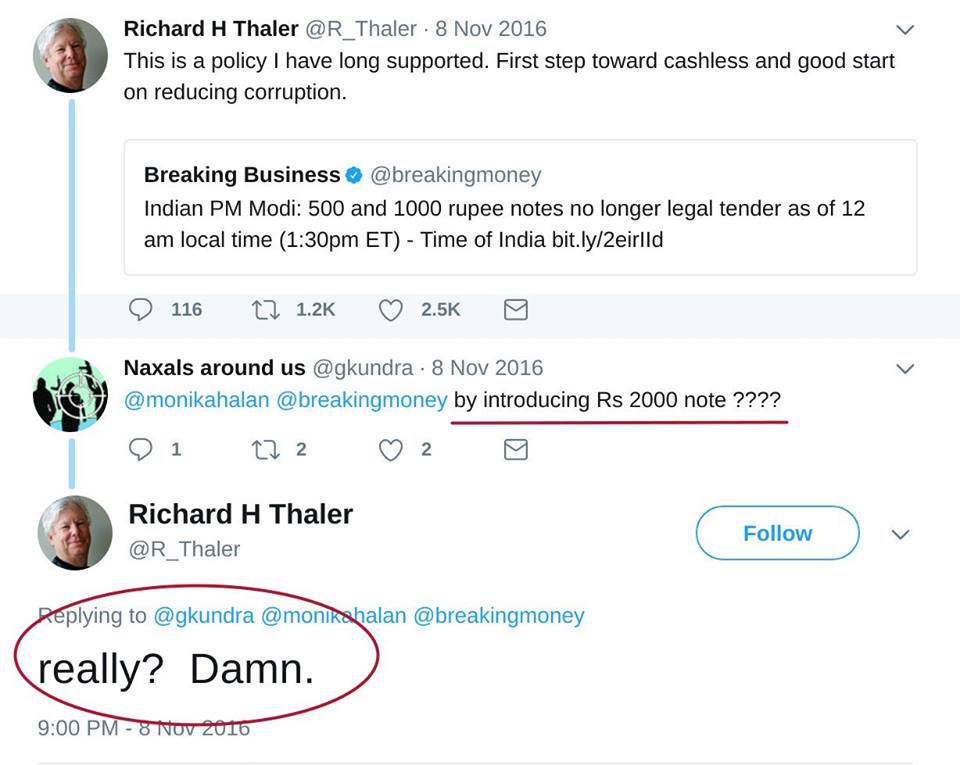 Thaler’s statement on demonetisation was in fact as follows: “The concept was good as a move to a cashless society to impede corruption but the rollout was deeply flawed and the introduction of the Rs 2000 note makes the motivation for the entire exercise puzzling.”

In a TV debate, Amit Malviya had accused Yogendra Yadav of playing caste politics. In response, Yadav challenged Malviya saying he would withdraw from public life if Malviya was able to produce any evidence to back his claim. Malviya posted a video of Yogendra Yadav where he Yadav is seen and heard speaking to a crowd in Muslim dominated Mewat about his Muslim identity. “I usually don’t carry TV debates to social media but making an exception to expose Yogendra Yadav’s Janus face,” tweeted Malviya attaching a short video clip. The clip ended with the question, “When are you withdrawing from public life?” ‘

I usually don’t carry TV debates to social media but making an exception to expose @_YogendraYadav’s janus face. Here is a video where he can be seen bragging his Muslim identity to a largely Muslim audience in Muslim dominated Mewat. If this isn’t cynical politics, then what is? pic.twitter.com/sPeHqaILpB

In trying to ‘expose’ Yogendra Yadav for using his Muslim identity for votes, Malviya used an edited clip which was not even a part of an election rally.

1. Allegation by @amitmalviya to which I responded:in 2014 election I used Muslim name for votes

2. Date of video:3 yrs+ after election

4. My main message: don’t think of revenge or violence https://t.co/uPi1F0xVUo

BJP IT cell head Amit Malviya while managing the party’s social media activities has shared a deluge of misinformation mainly targetting the opposition. In most of the above examples, he has not taken down his tweets despite fact-check stories debunking false claims. This not only shows a blatant disregard for the truth but also an intent to mislead.