The two-day AIIB conclave, comprising over 2,000 delegates from Asian countries representing government and private companies, will be addressed by PM Modi. 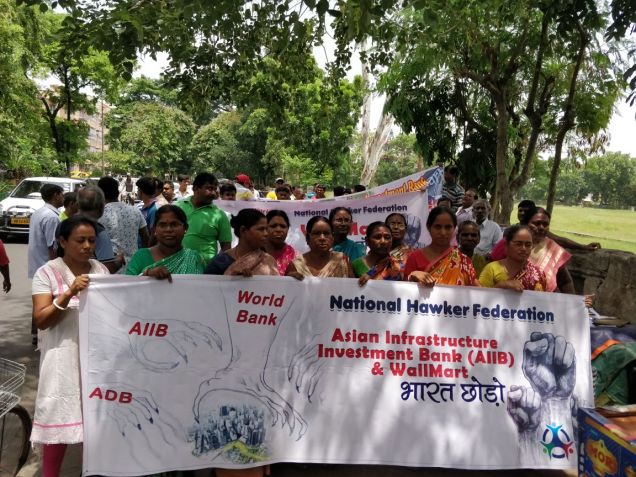 Mumbai: In advance of the third annual meeting of the multilateral lender Asian Infrastructure Investment Bank (AIIB) to be held in Mumbai from June 25, a three-day ‘people’s convention’ was held, with over 200 civil society groups and nearly 1,000 activists gathered to discuss issues of land, water, housing and livelihood. They came together under the umbrella banner, the Working Group on International Financial Institutions.

Prime Minister Narendra Modi will be addressing the AIIB conclave which comprises delegates from various Asian countries representing the government and private companies. ‘Mobilizing Finance for Infrastructure: Innovation and Collaboration’ will be the theme of the event. AIIB, which has already sanctioned over $1.2 billion for six infrastructure projects in India is considering another $1.9 billion  worth projects to be funded in the country.

Almost all infrastructural projects have been mired in controversies like land grabbing, violation of environmental norms, displacement and loss of livelihood looming large. Those speaking up against the projects are often condemned as anti-development or even anti-national.

Opposing the AIIB conclave, the organisations vowed to oppose the mega push for infrastructure building at the cost of what the convention termed as “diluting of regulatory frameworks on labour, environment and land acquisition”.

Series of simultaneous lectures were organised at multiple venues in South Mumbai to discuss the grave impact that development projects have had directly and indirectly on the people’s life. The primary focus of the convention was “to discuss alternatives for an equitable development agenda for all”. 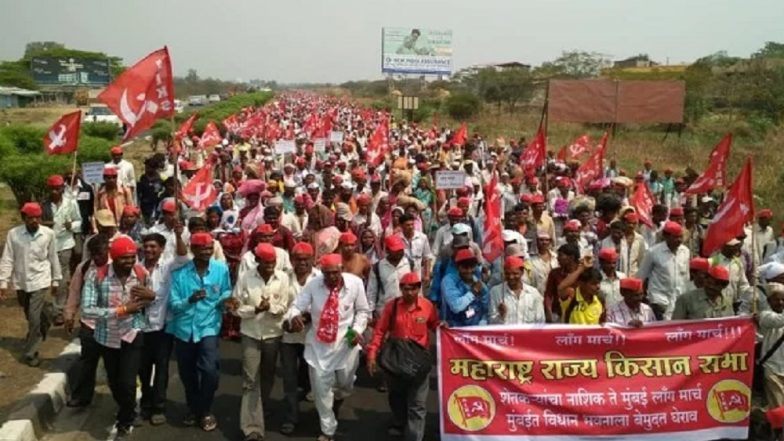 Farmers under the aegis of All India Kisan Sabha have threatened an indefinite hunger strike if their land is forcibly acquired for the bullet train project. Credit: PTI

Besides the projects planned and financed by AIIB, the convention also saw a large turnout of farmers and activists involved in resistance against other development projects impacting people. The discussion focused on the overall concerns arising out of funding pattern of International Financial Institutions (IFIs) and the influence of the international capital on the economy.

The most contentious of it all remained the Rs 1.08 lakh crore bullet train project that would be used by a small section of commuters between Mumbai and Ahmedabad. Of the 1,400 hectares of land to be acquired for this high-speed corridor, 353 hectares is to be acquired in Maharashtra’s Dahanu-Palghar-Bhiwandi belt and the rest from Gujarat. Land rights activist Brian Lobo, who is at the forefront opposing the project along with the 108 villages that would be affected by the project, pointed out that the twin district has been under an onslaught of multiple projects and the bullet train was only one of them. Besides the bullet train project, two big-ticket projects of the Centre —Mumbai-Vadodara express highway and the dedicated freight corridor — have been passed and all three projects will adversely impact the tribal communities of Thane and Palghar district. “These projects need to be looked at in totality and one has to look at the overall impact it will leave on the region, its people and the environment,” Lobo said. Similar concerns were raised by the activists who had gathered from Gujarat too. The failing transport system– both bus services and the local railways— was also discussed at the meeting.

The convention also pointed at the growing role of China in IFIs, which until recently was led and dominated by the West. The AIIB which emerged three years ago has its headquarters in Beijing. China is the largest shareholder in the bank and India is one of its top borrowers.

Benny Kuruvilla, a researcher with the organisation pointed out that the at reverse shift from private to public essentially happened post financial crisis in 2007. “In our study conducted from 2000-2017, we noticed while municipalities (local bodies) had taken charge in 137 projects across the globe, and nearly 700 were post the economic meltdown in 2007,” Kuruvilla said. The study has noted both economic and social reasons for this phenomenon.

Another speaker Sitaram Shelar of the Pani Haqq Samiti, which advocates the water rights of the slum- dwellers, talked about the disparity seen in the urban water supply and commodification of water. “Water which is a fundamental right of every individual is denied on the basis of illegality and cut-off dates in the city. It is the Dalit, adivasi, nomadic tribes and the Muslim communities that gets impacted with such state policies. Water at no cost can be denied by the state to its citizens,” Shelar said.

Other speakers included educationist Anil Sadgopal of the All India Forum for Right to Education, Arun Kumar, former professor of economics at the Jawaharlal Nehru University, activist Ulka Mahajan and Medha Patkar of the National Alliance of People’s Movements.

Hitting out at the AIIB, Patkar said, “Though the AIIB plans to push infrastructure in India, the institution has shown no signs of engaging in the improvement of the social and economic status of the poor people of the country.” The common man is ‘missing’ from AIIB’s roadmap, she alleged.

Mahajan looked at the larger issues of IFI’s and her experiences of fighting the land rights battle in the Konkan region of Maharashtra. “Laws are flouted regularly and, in some cases, they are even changed overnight to accommodate the interests of the IFIs. The most affected do not even exist in the scheme of these mega projects,” Mahajan said.

At the end of the three-day convention, the people’s convention prepared a strongly-worded resolution signed by all its attendees. “International Financial Institutions including AIIB function in a deeply undemocratic manner and trample people and national sovereignty and constitute a direct threat to the constitutional rights and nation’s economy and social security… These financial institutions exist and operate without any sanction from parliament, or other elected bodies, and are completely unconstitutional. Hence in the absence of people’s mandate, they must cease to exist,” the resolution read.

During the two-day meet starting Monday, June 25, which will be attended by over 2,000 delegates, some of the key focus areas of discussion will be AIIB’s investment in the National Investment and Infrastructure Fund (NIIF), the Mumbai Metro, major irrigation and flood management projects in West Bengal and Amravathi, the proposed capital of Andhra Pradesh. A minister from the Chinese finance ministry is also expected to represent the largest shareholder of the AIIB. Among others attending the meet include the British Chancellor of the Exchequer Philip Hammond and several other ministers from member countries.