The desi LGBTQIA+ community in America traces its journey to create spaces for queer South Asians which began in 1986 with a California-based magazine called 'Trikone'. While the verdict has no legal impact on the South Asian diaspora, it may help queer Indians abroad convince their families that being gay is not a 'Western idea' as they seem to believe. 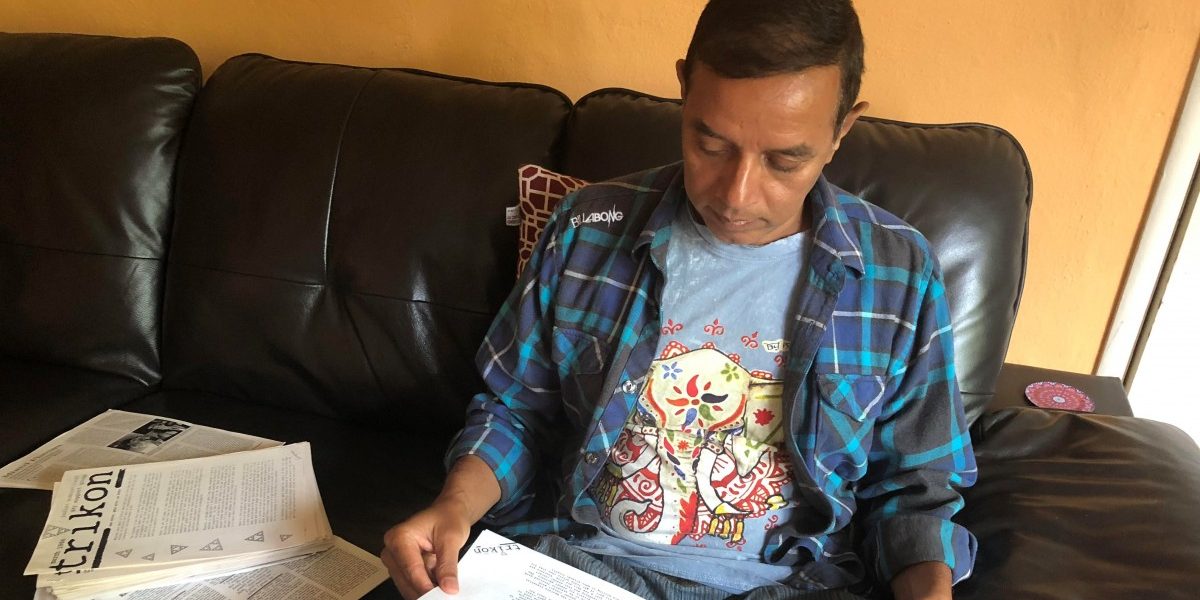 San Francisco: On a Saturday night in early September this year, a Bollywood-themed party raged at a night club in San Francisco. One could see a mixture of elation and relief on people’s faces while they hugged and congratulated each other, dancing away till 2 am. The euphoria was over something momentous that had just happened over 12,000 km away, across the Pacific Ocean.

On September 6, the Supreme Court of India scrapped Section 377 of the Indian Penal Code, effectively decriminalising homosexuality in a judgement that quoted the gay pride anthem “I am what I am.”  Two days later, the reverberations were felt on a San Francisco dance floor, as members of the South Asian lesbian, gay, bisexual, queer and transgender community partied the night away. Some of those attending the party came from as far away as Sacramento, a 140 km drive from San Francisco.

The party was organised by Trikone, possibly the world’s oldest South Asian LGBTQIA+ organisation, which was founded in 1986 and began publishing a magazine by that name. This was well before the advent of social media, in an era when the deeply-closeted South Asian gay community remained in the shadows and definitely did not participate in Bollywood-themed parties in the clubs of San Francisco. 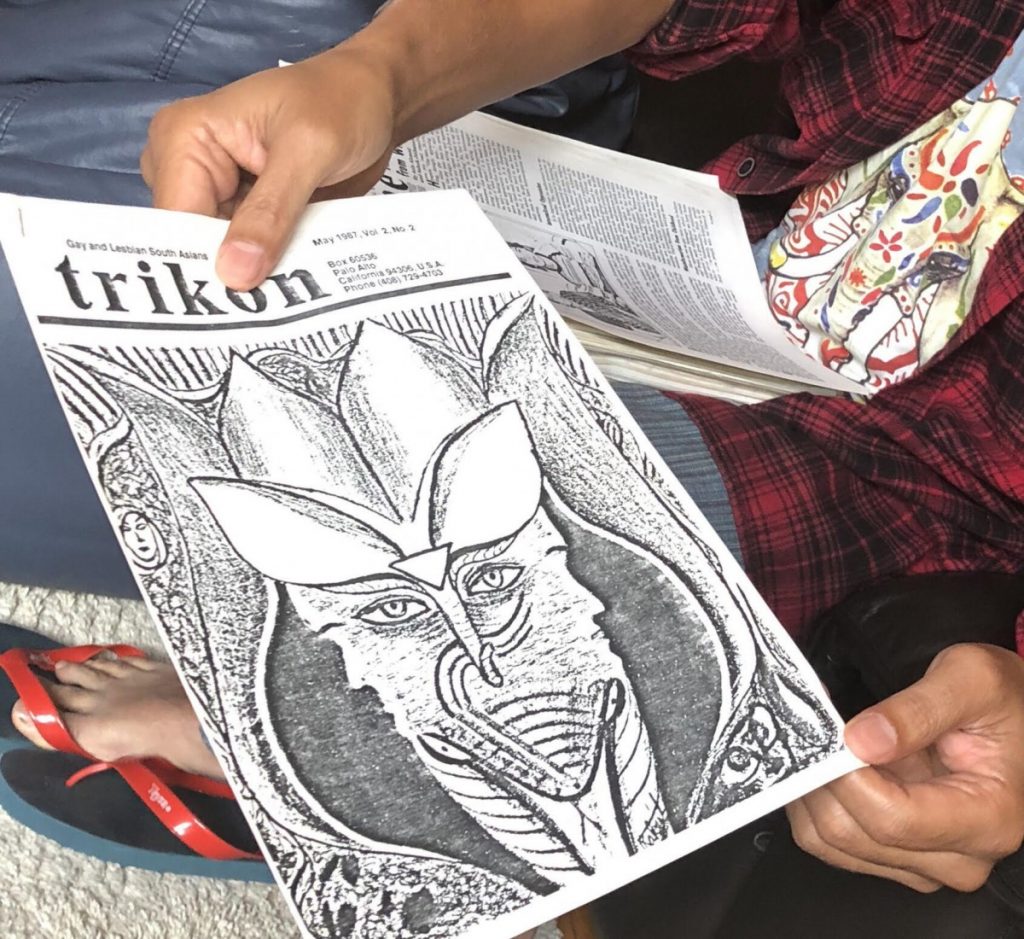 At the time, Trikone (the first issue was brought out as Trikon, the name was subsequently changed) consisted of printed sheets of paper stapled together and photocopied countless times; sheets of paper that helped gay South Asians express themselves through essays, poems and works of art.

Tinku Ishtiaq was nostalgic as he leafed through a stack of old issues of the magazine when I met him some time ago at his home in Berkeley. It had been a long while since he had seen them last. Ishtiaq, who is gay, and an engineer by training, hails from Bangladesh. He co-founded Trikone along with two gay men from India. He had connected with them after seeing a flier they had posted at an LGBTQIA+ centre in Berkeley in the 1980s. The word ‘trikone’ is Sanskrit for triangle and refers to the pink triangles used to identify gay prisoners in Nazi concentration camps. It has since been used as a symbol of emancipation by the gay community, as well as a reminder of past suffering. 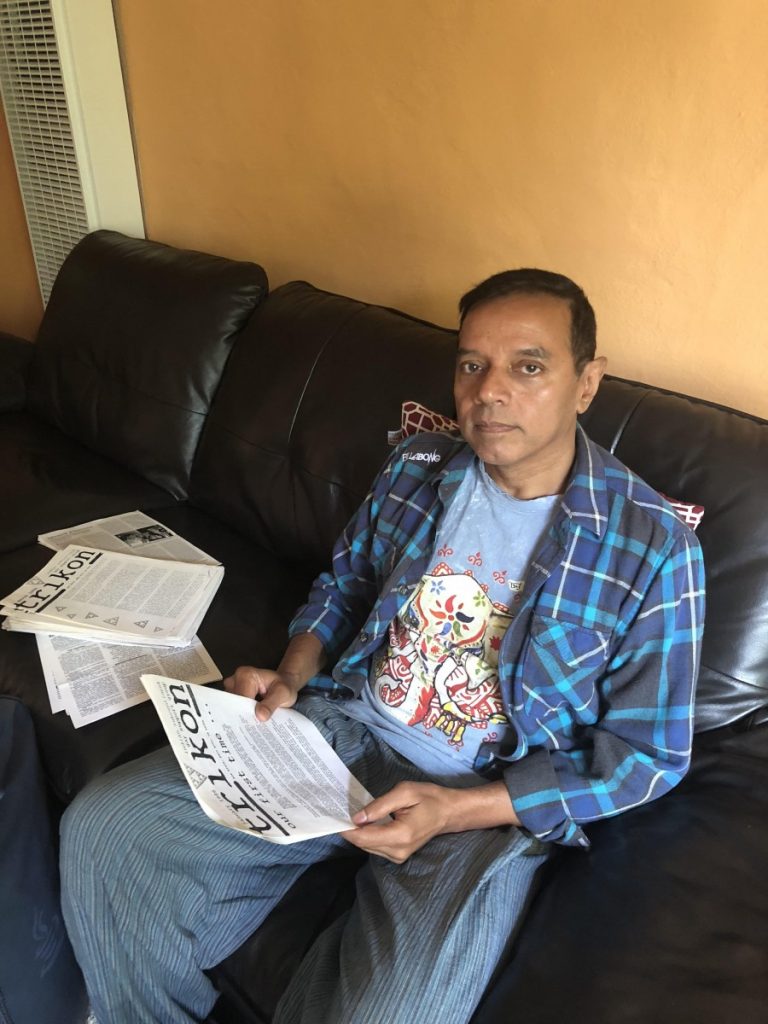 Ishtiaq talks of the stealth with which they produced the magazine. “We would stay back late at work, after everybody else had left office and use the office printer and photocopy machine to produce the magazine,” says Ishtiaq. The ’80s were, after all, a time when home printers were not commonplace.

Trikone’s subscription kept rising through the 1980s. In addition to the US, the magazine had subscribers in South Asian countries, too; the largest numbers were in India outside the US.

Often, subscribers did not want the magazine delivered to their homes, so it would be sent to bookstores and magazine stores, where it was on display. Sometimes, copies were mailed to post-boxes from which people could collect them. The magazine would be couriered in brown paper envelopes with no return address, as many were afraid of being caught with it. 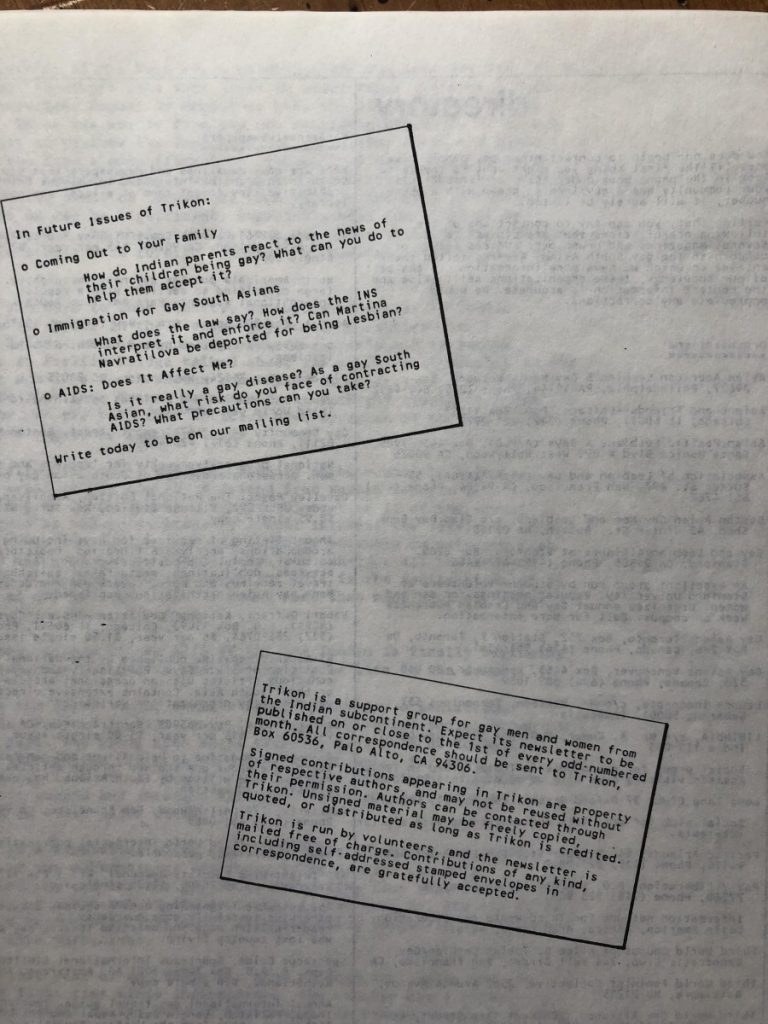 In the ‘Letters’ section of one of the issues, a gay man from Colaba, Mumbai, wrote in detail of how post-boxes in India could be rented for Rs 60. The letter even mentioned the address of relevant officials in Mumbai’s postal department.

The first issue of Trikone spoke of how South Asian gay men were completely invisible. It said:

There are no gay groups, no gay political organisations and no gay channels of communication in any of these South Asian countries. Even in America, the number of South Asians who identify themselves as such is virtually nil……Sexuality of any kind is taboo for the middle class in most South Asian countries…. Most gay men and women never come out of the closet because coming out requires you to acknowledge your sexuality honestly and openly. Instead the gay South Asian learns to live invisibly in the predominantly heterosexual society around him. The closet becomes his home within a home… If he has access to Western media, he becomes aware of gay liberation taking place elsewhere, but he thinks of it as a Western phenomenon, convinced he is the only gay South Asian alive.

Subsequent issues had everything from a full-page ink-and-paper sketch of an abstract face to an essay that asked whether India had a ‘gay scene’. “A friend from Bombay reports of soliciting in local commuter trains. Discretion is of the utmost importance as public displays of sexual interest are likely to offend others. This sort of gay life is probably unlikely to make you rush out and buy a ticket to Bombay, when you consider all the secrecy, fear and deception involved. Even so, this is the confirmation of an aspect of gay life in India, a human need that middle-class taboos have not been able to repress,” says the piece on India’s gay scene. In the very first issue, the magazine mentioned that, as it was begun by men, there were times the writing lapsed into the masculine gender in third person, and they hoped their female readers would bear with them. “These lapses are unintentional, and by no means meant to exclude them from this group. Rather, we welcome the participation of men and women alike in our activities,” it said.

Arati Warrier, a member of Women of Trikone, was particularly moved that her father was the first to text her the news about India’s Supreme Court legalising homosexuality earlier this month.

Her parents had, over the years, struggled to come to terms with her sexual orientation. When she came out to her parents four years ago, they had a hard time digesting it. The text message from her father represented a milestone in her parents’ journey of understanding and accepting her.

A powerful young performance poet in the San Francisco Bay Area, Warrier, who grew up in the Malayali community of Texas, is a YouTube sensation. One of her highly popular poems, ‘Witch Hunt’, has her reciting with great passion, the pain that homophobia inflicts on her.

… 2013, Section 377 is reinstated and monsoons erupt all over the country.

I hold the shattered remains of a world in my cup.

Two weeks later I am back in my parent’s house.

The entire thing is a closet.

I am a master of illusion.

but it is overwhelming to remember that I am still a mistake, a tired secret.

I can’t tell my parents about this girl I know and how beautiful her lips are,

so instead I whisper into my pillow over and over.

I can’t explain to my mother that her casual homophobia is ripping holes in all of my sweaters, and I am always shivering….

The popularity of Warrier’s poems would sometimes worry her parents, as they didn’t want their family in India to see her online presence.

Queer South Asians growing up in the US have long had to suffer from the narrative about homosexuality being an American idea; that their queerness is a result of living in the West. Parents often regret moving to the US, as they believe that’s what turned their children gay. While the scrapping of Section 377 has no legal impact on the South Asian diaspora in the US, Warrier feels the striking down of this colonial norm helps queer Indians abroad convince their families that being gay is not a Western idea, since this is something that many parents seem to believe.

Nishant Shahani, professor at Washington State University in Pullman and author of Queer Retrosexualities: The Politics of Reparative Return, credits the recent Supreme Court of India judgment for bringing LGBTQIA+ issues into public discourse, facilitating discussions on heterosexuality not being the default setting. “When I left India in 1999 for a master’s in the US, there wasn’t any public discussion on homosexuality,” he says.

“Queer South Asians in the US have to navigate both homophobia and certain structures of racism,” says Shahani, adding that queer Indians in the West are not spared from preconceived notions of India being a land of Bollywood and snake-charmers.

While people in South Asian countries like India and Pakistan are growing more progressive, Mohammed Shaik Hussain Ali, current chairperson of Trikone, says those who migrated from these countries to the US in the 1980s and ’90s are often very conservative and live in a time-capsule. They belong to the India of a bygone era.

Ali and his friends were manhandled by American-Indians while holding placards about LGBTQIA+ rights, when Indian Prime Minister Narendra Modi visited Silicon Valley in 2015. Ironically, Ali says he received much support from Indians living in India.

Amidst the elation over the reading down of Section 377, Ali talks of the need for cautious optimism. “We now have the law on our side, so this is one battle less that we’ve got to fight, but those who are gay understand that we still have a long way to go when it comes to social acceptance,” says Ali. He has two friends in India who publicly celebrated the Supreme Court judgement and were fired from their jobs the next day. Ali says the law doesn’t automatically translate into social acceptance. Marriage equality in the US has not ended employment discrimination for the queer community, adds Warrier.

Trikone’s success can be measured by the increasing number of gay South Asians who no longer need the organisation, as they have found love and acceptance within their families.

“I know 27 gay South Asian men in San Francisco who don’t feel the need to join Trikone, as their family and friends accept them as they are. They do not identify themselves as different from the world around them,” says Ali. The magazine itself was discontinued in 2014; “The mainstream media is covering queer issues well enough. There is now no need for a separate magazine for the South Asian gay community,” says Ali.

It’s been a long while since Ishtiaq was involved with Trikone. As a young man in the 1980s, Trikone was about the only thing he thought of. “At this point in my life, there are so many other things I’m involved with. If I were young today, I don’t think gay rights would be my only focus, as we live in an era that is not as bleak as it was in the 1980s. At that time, I felt I was shining a torch in a dark cave,” says Ishtiaq.