Does Increased Visibility of Trans People in Performing Arts Translate into Progress?

Or are performance spaces too limited to affect any real change in the minds of people? 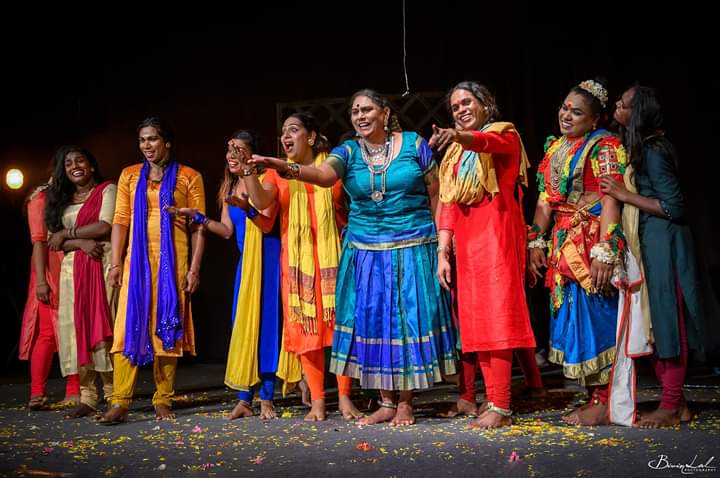 While directing Nava earlier this year, Sharanya Ramprakash felt challenged like never before. She had co-founded theatre group Dramanon, directed and acted in several productions before it.

Yet the experience hadn’t prepared Sharanya for what was to come. A collaboration between Dramanon and Aravani Art Project, the play narrated the stories of nine transwomen through nine rasas or emotions.

“Trans people go through so much normalised violence. So, just two days before the show at Ranga Shankara, we realised that one of the actors, due to some really trying circumstances, won’t be able to turn up for the show. We realised we wouldn’t be able to do it without acknowledging her absence,” says Sharanya. 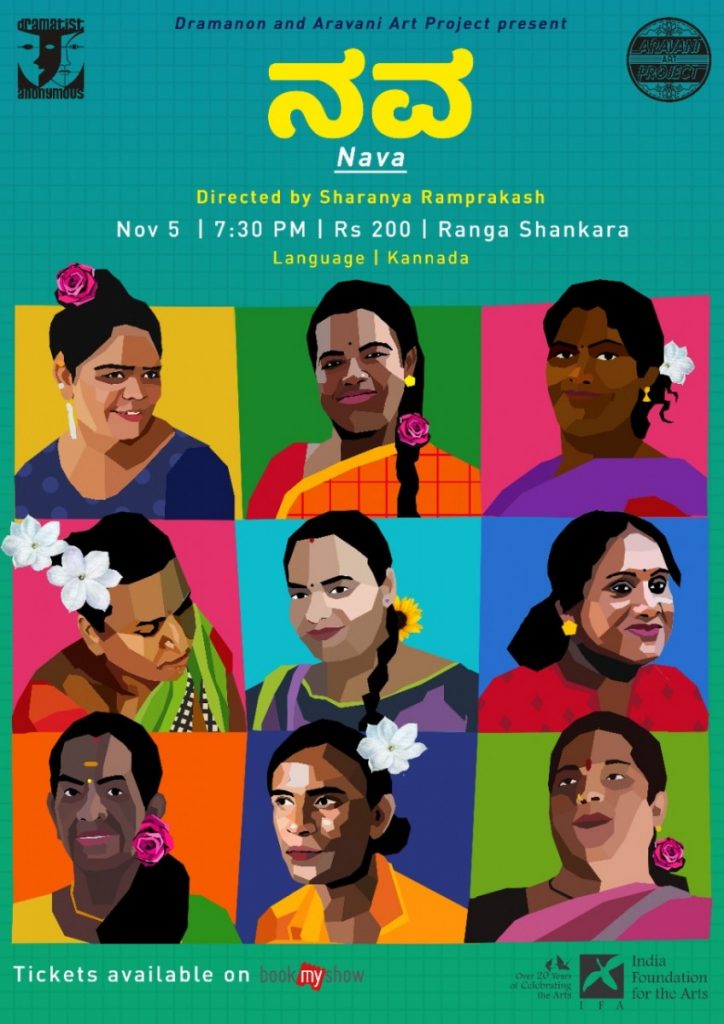 “If it were an actor, we would have replaced her but in this process, in her absence, there is a story which is as powerful as her not being there. Not all of us have the privilege of showing up where we want to. Those things really blew my mind,” she adds.

Nava wasn’t the exception this year.

A host of cultural events and developments saw the members of the trans community taking centrestage in 2019.

If Nava questioned the conventional performance and who does a stage belong to, Freedom Begum dealt with inclusive spaces of expression, resistance, memories, and loss of freedom. The cast, that included several trans people, was integral to the play.

After all, the narrative was about the loss of Begum Mahal, a space that welcomed all irrespective of caste, class and gender. Today, Begum and her bungalow have both disappeared from Bengaluru’s landscape, literally and metaphorically.

Also read: ‘Freedom Begum’: The Impact of Gentrification on Culture

The community had strong objections to the Transgender Persons (Protection of Rights) Bill, 2019. They claim that the Bill was framed without consulting them and doesn’t demonstrate any understanding of sexual and gender identity, on the part of the government.

The National Register of Citizens (NRC) and Citizen Amendment Act (CAA) exacerbates the crisis for the community. With a majority of trans people having no ties with families, producing adequate documentation would prove to be an onerous task for them. At the Kolkata Pride Walk held last year, the participants raised their voices against the proposed legislation.

In the absence of foolproof rights and well-defined legislation, does this cultural activism then offers a ray of hope?

Transgender rights activist and Hindustani classical musician Rumi Harish, who also wrote the play Freedom Begum says, “Yes, performance has given us a language and a narrative to talk and change it from sympathy to assertive politics.”

According to Rumi Harish, performance as an art has had a conservative understanding which has started changing gradually. At every performance of his, Rumi makes it a point to talk about voice, gender and sexuality.

The trans queer performer ditches the expected attire of sari to present a Hindustani classical music concert in shirt and trousers.

“I started becoming political about this issue in my performance due to which I have also lost out on a lot of concerts. I am not considered a professional singer anymore but I don’t care. I still practice my politics and every performance I get a chance I still talk about these things in Hindustani classical music, in Sufi music and I bring out this politics,” Rumi says.

One of the most remarkable developments of 2019 was the appointment of Manjamma Jogati, a well-known Jogati Nritya artiste as the chairperson of Karnataka Janapada Academy. She is the first trans woman to head a cultural institution in Karnataka.

Jogati Nritya is a ritual dance performed by Jogappas, a community of transgender people in north Karnataka and in some parts of Andhra Pradesh and Maharashtra, to appease the goddess Yellamma.

“She has struggled and worked at her craft to achieve it. And I also think it is super that she’s single-handedly keeping Jogathi Nrithya alive by being a benevolent dictator to her troupe and students. She has performed, practiced and preserved this form for a long time with no help from anyone. As for what it means for the community, I think anyone’s achievements in any domain always make one of us feel like it is possible and even opening up that door a little bit allows for the light to come in,” says Joshua.

Manjamma performed at the opening of the 10th edition of BQFF this year. Joshua finds it a little disappointing that it took them a decade to have her performance at BQFF.

“In a way, this responsibility of visibility doesn’t fall on the practitioner but the promoters and the platforms. And therefore, I think that the domain of the performing arts having the same hurdles as a society always makes me angry and sad.”

In RJ Uma’s view, the recognition of Manjamma Jogathi’s work is an aberration, not the norm. 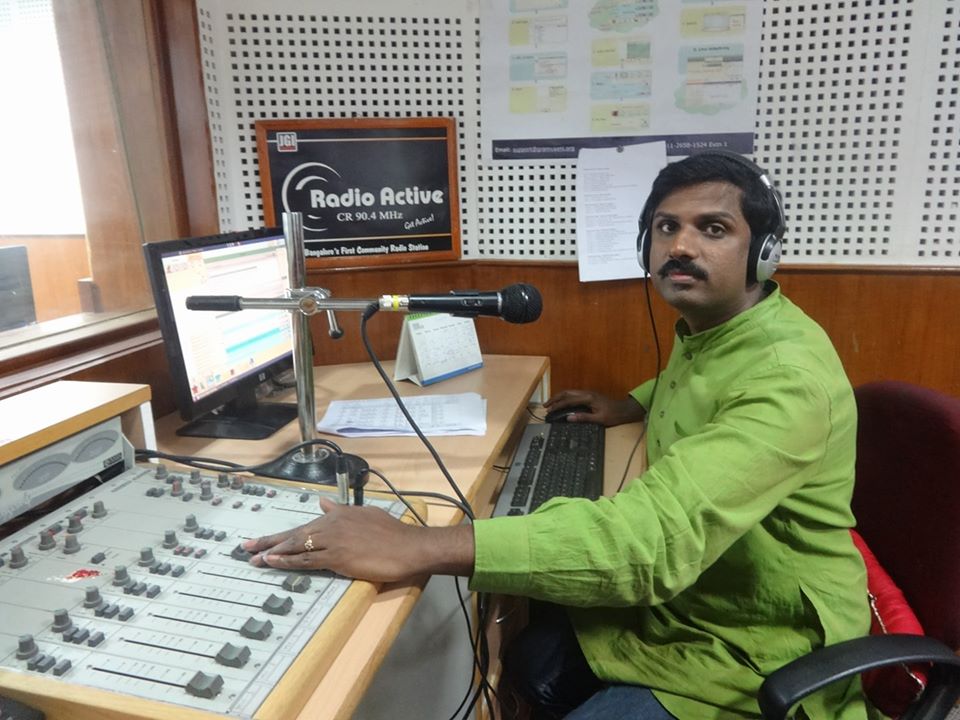 “How many trans people can hope to reach where Manjamma or Akkai have reached? The community needs to be visible for which it needs more platforms to express themselves. I write poetry but where do I go and showcase my talent?” says Uma, a trans woman.

Having hosted the show Jeeva Diaries – based on the lives of working class sexual minorities on Bengaluru’s first community radio station Radio Active 90.4MHz – since 2015, Uma is aware of the impact such platforms can fuel.

“A lot of listeners call us and say that they never considered transgender people beyond their presence on the streets. There was a regular listener, a retired bank employee who was differently abled, who would call me often and congratulate me for spreading awareness about the community. He would also visit our office and distribute chocolates. Why can’t commercial radio stations or All India Radio have shows like these?” asks Uma.

Describing Kerala as the state with the most progressive policies towards sexual minorities, Uma asked for Karnataka to follow its neighbour and kickstart something along the lines of ‘Varnapakittu’, the two-day trans art festival held in Thiruvananthapuram last year. The participants could take part in dance, music, mono-act, mimicry, story poetry and essay writing contests. The Kerala Department of Social Justice also gave cash awards to 10 transgender people who have achieved excellence in various social fields, except cinema.

Since 2016, transgender rights activist, writer and actor A. Revathi has performed about 40 shows of Vellai Mozhi, a Tamil play which is called Nanda Dhwani in Kannada, in Tamil Nadu, Karnataka and Jaipur. The 40-minute solo act is based on her autobiography The Truth About Me: A Hijra Life Story.

It has been conceptualised by theatre director A. Mangai, features a poem by Kalki Subramaniam and has music by Shyam Balasubramaniam. Both Kalki and Shyam are prominent members of the trans community. 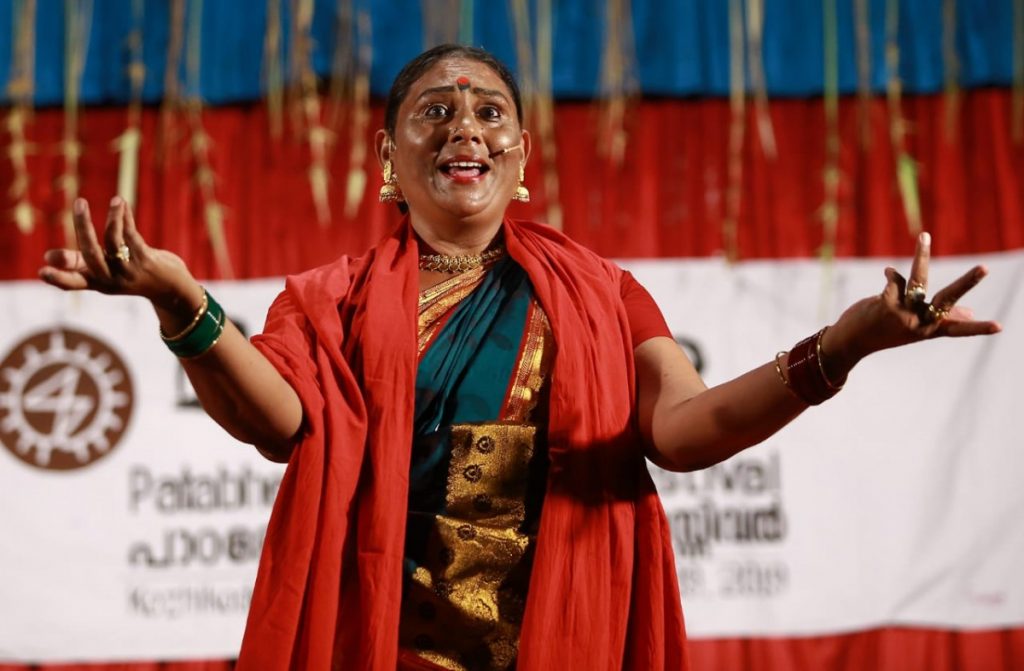 “I have performed it for different kinds of audiences, students, teachers, doctors and so on, and I feel it has definitely been able to change the mindset of a few. People started writing on the subject, researchers started studying the subject after watching the play. After the play is over, I find audience members waiting to speak to me. They tell me how they were not aware of our struggles, our pain and lives but the play has sensitised them,” says Revathi who has gone ahead to include the issues of acid attack, rape, caste oppression in the narrative.

As an artist, Revathi feels accountable and feels that a macro view of society must be taken.

According to Revathi, the visibility of trans people in the performance arts translates into confidence and empowerment for the community.

“We are becoming more assertive about our identity. All these years, we were quiet and scared but now we are coming out of our shell slowly and talking about it. People are supporting it,” expresses a hopeful Revathi, who recently performed at Bangalore University on January 20.

Media and arts collective Maraa has come up with a platform called Chinmini Cross, an imaginary space that has ‘moved’ from one location to another with every performance. The unique idea was a response from Lavani dancers, Jogappas, sex workers, Sadir artistes, rappers and music bands, to their struggles against gender, caste and patriarchy.

Angarika Guha of Maraa explains, “In the context of Chinmini Cross, we wanted to bring these performers to the stage because of their fearless commitment to their practice.” 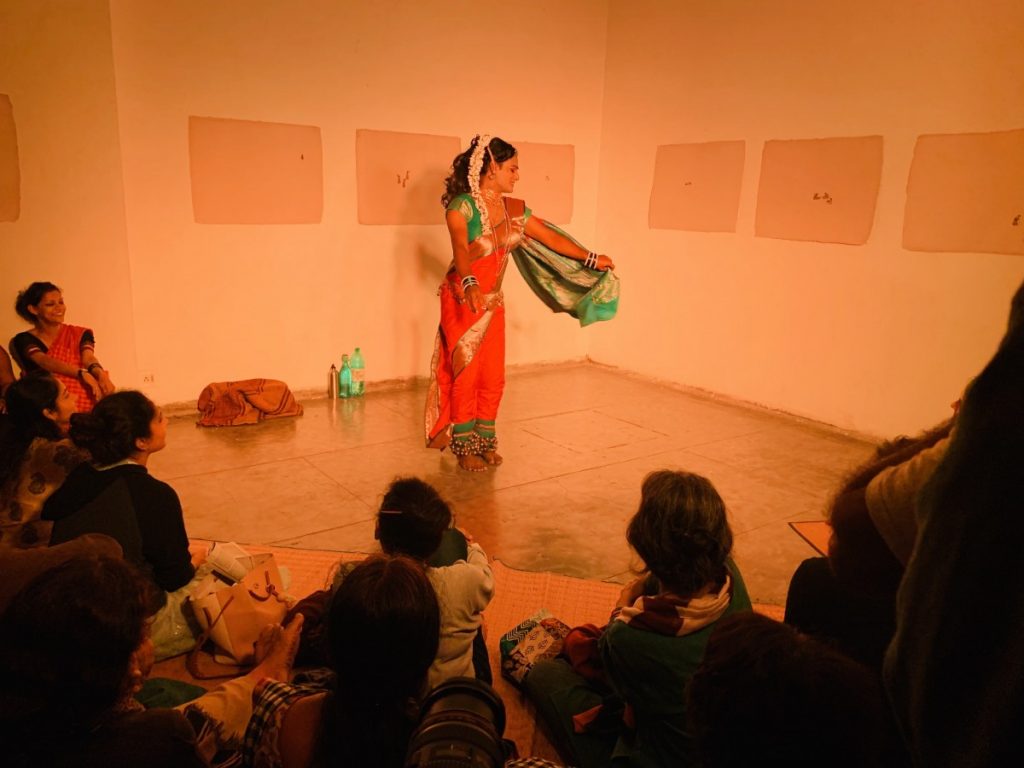 Art and activism do cross each other’s paths but for Joshua, to put the onus of activism on art is burdensome. Guha too isn’t sure if their Chinmini Cross can directly spawn activism. “Our attempt was to challenge the predominant discursive notions of gender and sexuality, by showing its interlinkage with caste and labour,” she adds.

The recipient of Karnataka Rajyotsava award and the first transwoman in the state to register her marriage, Akkai Padmashali finds the onus on art to affect the bulk of change a bit classicist. “How many people from the vulnerable and section can afford to go and watch a performance? Imagine a person or a sex worker or a vendor going and watching a play?” says Akkai.

Sharanya recalls a lot of people telling her that they were moved by Nava.

“A few also found the actors to be amateur. I felt that maybe they were amateur viewers. We all have a great responsibility in all these processes. Don’t we?”

Shailaja Tripathi is an independent journalist.

Editor’s note: This article has been edited to remove Rumi Harish’s and Uma’s deadnames, and their use by us is regretted.