A new research paper looks at the benefits of hiring trans people in India.

One of the more troubling aspects of the Bill is that it attacks the trans communities right to livelihood by criminalising begging – a common way of earning a living for many in the community – and failing to provide alternative employment options.

Tackling the topic of trans exclusion from sustainable employment is Godrej India Culture Lab’s (GICL) ‘Manifesto for Trans Inclusion in the Indian Workplace’ in collaboration with TWEET Foundation, Periferry, Community Business, The Humsafar Trust and Keshav Suri Foundation. The research paper was released on the heels of the Bill, on Friday, 15 December.

The case for trans inclusion in the corporate workforce

“India is far behind in tapping into Pink/LGBTQIA tourism that has been a major contributor to the US and Brazilian economy,” said Keshav Suri of The Lalit Hotels, who was in attendance at the launch. The LGBT Foundation in Hong Kong found that if the LGBT community worldwide were a country, it would be the fourth largest economy GDP wise (2018)!

World Bank estimates put the cost of homophobia in India at USD $32 billion. In an appeal to corporate India, the paper emphasised the benefits to the bottom line – and urged companies to turn this cost into a profit. It argued that mainstreaming trans employment would create a down-up ripple effect. So, a focus on meaningful trans inclusion would mean more inclusivity for other marginalised minorities across the gender and sexual spectrum.

Also watch: How Progressive Is the Transgender Bill?

Trans people are often discriminated against within the LGBTQ+ community and being the most visible, often face increased risks of marginalisation and even violence. According to the National Human Rights Commission, 92% of trans people are unable to participate in any economic activity.

To solve this, companies can include 4.9 lakh of the country’s population in the workforce and help with their societal inclusion and financial security. Abheena Aher, TWEET Foundation, spoke of the nuances (and discrimination) within the trans community too, as female-male trans people are often the most ignored.

In her opening remarks, Radhika Piramal of VIP luggage announced, “I’m corporate and queer”. She spoke of her insider knowledge in combining inclusivity with corporate success and urged Indian workplaces to create more events and sensitisation workshops. This would create a safe workplace and give this idea wings beyond a few queer-friendly companies to a larger movement.

The social sector has been vital in paving the way for corporates and the NGO Humsafar Trust recently released a manual, ‘Inclusion Of Gender And Sexual Minorities In The Workplace’, to better inform company guidelines and HR policies.

Talent migration because of a lack of acceptance also ranks high among reasons to adopt inclusivity as a corporate mantra. In fact, the brain drain of LGBTQ IIT alumni to foreign industries with progressive policies was cited in the IIT petition against Section 377 in the Supreme Court.

Indian industrial bodies such as FICCI and CII are already having LGBTQ conversations in their annual conclaves as research globally shows how LGBTQ+ inclusion positively impacts business innovation and creates happier workplaces where employees are empowered and accepted and will most likely continue for the long haul.

Zainab Patel, trans activist and Policy Analyst, UNDP, said that businesses had a responsibility towards meeting the human rights of equality for people by creating egalitarian workplaces.

The paper mentioned that LGBTQ+ friendly marketing would appeal to millennials purported to be more liberal and tolerant than older generations. Already ads with an LGBTQ+ focus tend to go viral, and corporates must tap into that. Parmesh Shahani, Head of the Godrej India Culture Lab, presented a striking number to underline this. In the week after the 377 verdict, newspaper and digital coverage of Shahani speaking about it (without directly advertising for his workplace, although that was always mentioned) was equivalent of Rs 11.7 crores of paid publicity!

Pearl Daruwalla, of The Humsafar Trust, warned against using trans people as CSR or PR activities without considering the peripheral social reality of trans people when looking at their employment – for example, the mismanaged employment of the Kochi metro trans employees that made media waves. Although 20 trans employees were hired, at least two were forced to leave as although they had employment, discriminatory housing policies made their stay difficult.

Neelam Jain, Periferry, reiterated this by saying that jobs for trans people open the doors for so much more – social status, the ability to afford housing, the possibility of a new work family and the promise of dignity. To help in meaningful employment, organisations can expand their medical benefits and insurance to account the specific needs of their trans employees. 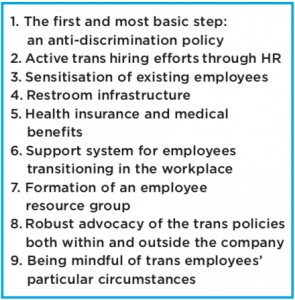 The nine actionable changes mentioned in the report. Credit: A Manifesto for Trans Inclusion in the Indian Workplace, Godrej India Cultural Lab

The paper says, “Ideally, the insurance company should include gender affirmation procedures and hormone therapy in their coverage.” The Lalit group helped with the transition of one of its employees, and Godrej offers in-house reimbursement.

Additionally, companies should know that because of systemic discrimination, 58% of transgender students drop out of school before class X.  Thus, companies need to be flexible and allow for time to adjust to the organisation and its culture.

It also highlighted some LGBTQ+ inclusive policies and benefits that some Indian companies already have (listed in the image above).

Ultimately, as Suri said of the paper, “Condragulations” but there is a lot of work to be done by the corporates so that equal, meaningful work can be done by Indian trans people.

Devina Buckshee is an independent writer on minority rights and culture, and tweets at @DevinaB21.