Family Prejudice, Lack of Safe Spaces: What the Pandemic Has Meant for India’s LGBTQI Community

Representative image. Supporters and members of the LGBTQI community hold the rainbow flag as they participate in a Queer Azadi March 2020 at Azad Maidan in Mumbai, February 1, 2020. Photo: PTI/Mitesh Bhuvad

Abhijith had been working as a radio jockey in Thiruvananthapuram, Kerala, when the COVID-19 pandemic hit India in March last year, prompting the government to impose a nationwide lockdown. Abhijith returned to the rural Pathanamthitta district, where his parents live with a joint family, including uncles, cousins and grandparents.

Describing the experience of living with homophobic relatives and cousins as “unbearable”, he said, “Apart from the frequent reference to my sexual ‘abnormality’, they took me to a guruji to ‘cure’ me. He gave me something to eat, which made me throw up. The guru assured me that I was throwing up whatever ‘demon’ was possessing me and ‘making’ me gay.”

Early in 2021, Abhijith travelled back to Thiruvananthapuram, where he found support from the members of the queer collective.

Inspired by their work, he also decided to work towards uplifting the queer community. “I wish no one else goes through the mental trauma I have endured,” said Abhijit.

Abhijith’s story of mental distress arising from family abuse is common among members of India’s LGBTQI+ community, many of whom were trapped in their homes and removed from peer support groups during the pandemic.

As India continues to reel from a pandemic that has claimed more lives (235,524) in three months of the second wave (April-June 2021) than in the one year before that (162,960 deaths in March 2020-March 2021), the LGBTQ community has faced myriad problems. Sexual minorities have historically suffered from mainstream prejudice and the pandemic has aggravated socio-economic inequalities, instigated family and institutionalised abuse, apart from limiting access to essential care. This has resulted in acute mental distress which has overwhelmed queer support infrastructure across the country.

Speaking to queer collective representatives across India, I learned that the heightened levels of distress in the community was due to longstanding factors that were unfavourably triggered under lockdown conditions. Family members who are intolerant of marginalised sexual identities, often tagging their orientation as “disorder” or “just a phase”, have always featured among the main perpetrators of subtle and overt forms of violence towards queer, trans and homosexual people.

Sappho For Equality, a Kolkata-based feminist organisation that works for the rights of sexually marginalized women and trans men, recorded a similar trend. Early in the first wave, the organisation realised that the existing helpline number was getting overwhelmed with distress calls. It added a second helpline number. The comparative figures indicate a 13-fold jump in numbers: from 290 calls in April 2019-March 20 to 3,940 calls in April 2020-May 2021.

“Most of the calls we have been getting from lesbians and trans men are urgent appeals to prevent forced marriages during lockdowns. If they happen to resist, they are either evicted or forced to flee home. But where to house them? There aren’t too many shelters, we have one which is already at full capacity,” said Shreosi, a Sappho member and peer support provider.

Shreosi says that the nature of distress calls has also changed. “Earlier people would call in for long-term help, such as professional mental health support. But during the pandemic, it has changed to immediate requests to rescue from oppressive home situations. Often, they will speak in whispers so that the parents can’t hear.”

Like many of his fellow queer community members, life for Sumit P., a 30-year-old gay man from Mumbai in Maharashtra, has taken a turn for the worse. The lockdown has led to the loss of safe spaces and prolonged residence at home.

“It has been a really difficult time since the beginning of the lockdown. I am suffering from a lot of mental stress since I cannot freely express myself at home. Even while making a call, I have to check my surroundings to see if anybody is there. If I try to step out, my family demands an explanation to leave the home. I feel suffocated. The loss of safe spaces, which anyway were few, has been immensely debilitating,” he said.

Sumit is also dealing with a peril that has hit the community harder than others – unemployment and income shortage. Sumit had opened a cafe with two other queer friends, which is now running into losses. For others, pandemic-induced job losses have forced queer persons from all over the country to return to their home states and move in with their families who’ve turned abusive during this long period of confinement.

According to Kolkata-based physician, filmmaker and gay rights activist Tirthankar Guha Thakurata, the pandemic has forced some queer people to come out, succumbing to rising discomfort and pressure exerted by homophobic families.

“In most cases, family relations sour when a person reveals their identity. But many do not flee home. They find a breathing space or ‘space out’ in their workspaces. In the absence of these spaces, mental problems rose significantly,” he said.

Not being able to express themselves freely in front of parents who are hostile, intolerant and often address transgender persons by their deadname or misgender them has created situations of severe distress, suicidal ideation and self-harm.

Psychiatrist and queer feminist activist Ranjita Biswas (she/they) cites an incident. A gender-nonconforming person (preferred pronoun: they) died under suspicious circumstances just days after leaving their peer group and going home to their birth parents. The final rites were performed with them dressed in bangles and a saree.

“When a member of our community asked their mother why she chose a saree for someone who had worn androgynous clothes all their life, she plainly said it was natural because after all, the deceased ‘was her daughter’. The absolute invisibilisation of the desires of someone even after they are gone is deeply frustrating,” Biswas muses. 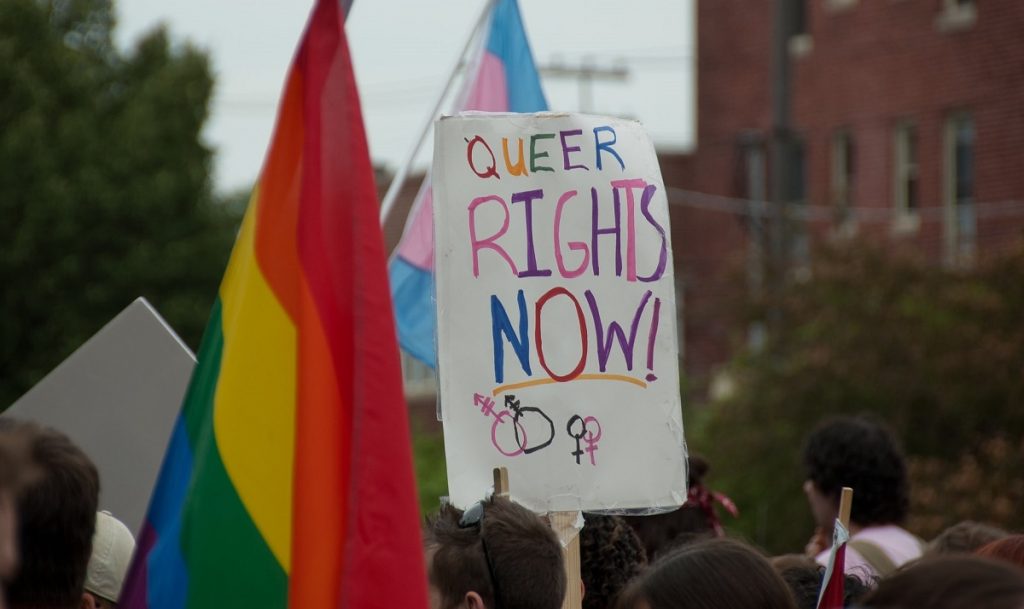 In India, queer people’s access to professional mental healthcare has been “very limited,” according to community members such as Ankan Biswas, India’s first transgender lawyer who has been working with the Human Rights Law Network in West Bengal.

“A large majority of the psychiatrists still consider homosexuality as a disorder and practice ‘correctional therapy’. It’s only around the big cities that some queer-friendly psychiatrists can be found,” Biswas said. “The pandemic has further widened the inequalities in access to mental health support for India’s LGBTQ community.”

Biswas is spending anxious days fielding an overwhelming amount of calls and rescue requests from queer members trapped in their homes, undergoing mental, verbal and even physical torture. “We don’t have the space, I just tell them to wait and bear it a little longer,” he said.

Anuradha Krishnan’s story, though not involving birth family, outlines how the lack of physical support spaces have affected India’s queer population. Abandoned by her birth family when she came out to them as a trans woman in 2017, Anuradha Krishnan (she/they), founder of Queerythm in Kerala who is studying dentistry, had to move into an accommodation with four other persons. “I am used to talking and hanging around with friends. Isolation triggered my depression and I had to seek psychiatric help.” Living in cramped quarters did not help with quarantine requirements and all of them tested positive during the first wave.

What is deeply worrying is that the Indian queer mental health support infrastructure, already compromised with historical prejudice, is now struggling, placing more and more pressure on queer collectives and peer support groups whose resources are wearing thin.

During the 10 months of the first wave of the pandemic in India in 2020, Y’all, a queer collective based in Manipur, received about 1,000 distress calls on their helpline number from LGBTQI+ individuals. In May 2021 alone, they received 450 such calls (including texts and WhatsApp messages) indicating a telling escalation in the number of queer people seeking help during the second wave.

As India’s queer-friendly mental health support infrastructure continues to be tested, Y’all founder, Sadam Hanjabam, a gay man, says, “Honestly, we are struggling to handle such a large number of calls, it is so overwhelming. We are also dealing with our own anxieties. We are burning out.”

Sreemanti Sengupta is a freelance writer, poet, and media studies lecturer based in Kolkata.