‘They Give Me Hope for the Future’: Jammu Holds Its First Pride Parade

As members of the LGBTQ community continue to face harassment, they are demanding their right to education and striving to raise awareness. 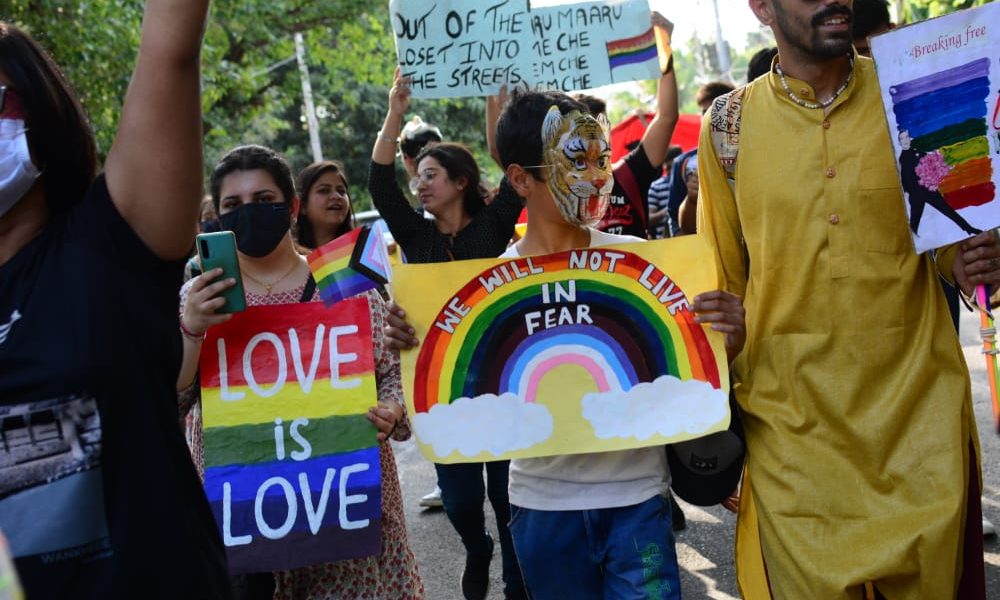 Arnavi was just nine years of age when she came realised that she is a transgender person. All of her family members, except her mother, boycotted her or ignored her.

She is now 26 and has come a long way. After getting a fine arts degree at Jammu university without any support from her family or the government, she has taken on the role of an ambassador, raising awareness about the rights of the LGBTQ community in Jammu.

Speaking to The Wire, she says she has hoped for years that a pride parade would take place in Jammu. On June 26, her dream came true. For the first time, the Pride Parade was held in Jammu, organised by Climate Front, a local NGO.

June is pride month and many states in India held pride parades to celebrate the LGBTQ community and raise awareness about issues.

“The activists have done a fantastic job in creating awareness about the rights of the LGBTQ community,” Arnavi said, speaking about the first parade in Jammu. 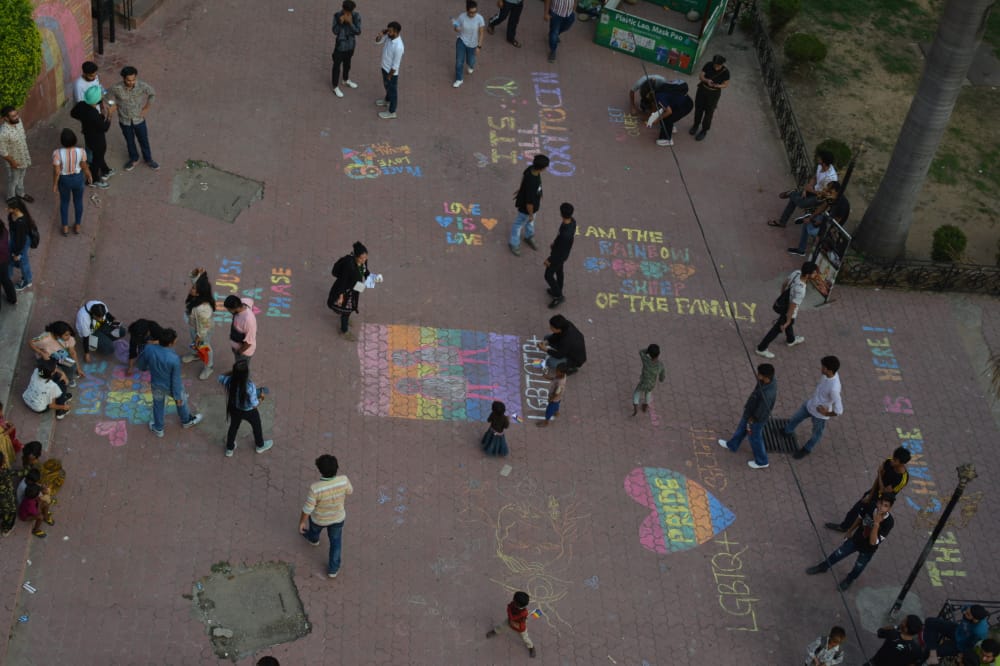 Pride parades, pride marches or pride festivals act as a celebration of the LGBTQ community but are also a form of protest to raise demands like legalising same-sex marriage. While pride celebrations take place throughout the year, some take place in June – to remember the 1969 Stonewall riots in New York City, which served as a turning point in contemporary LGBTQ social movements. The marches aim to foster a sense of community and pay respect to the movement’s past. Around the first anniversary of Stonewall, protest and pride marches were staged in Chicago, Los Angeles, New York City, and San Francisco in 1970. The gatherings expanded across the globe.

Hundreds of activists, journalists, and lawyers took part in the pride parade in Jammu and extended their full support and solidarity to the LGBT community. The renowned journalist and editor-in-chief of Kashmir Times, Anuradha Bhasin was also part of the parade. While talking to The Wire, Bhasin said, “The constitution of India guarantees rights to all citizens irrespective of caste, colour, creed and gender. When it comes to gender, it doesn’t mean men and women only. It means other genders as well. The transgender community has been ignored, discriminated against, and not treated with dignity.”

“The positive sign is that the younger generation has organised this pride parade. It will take time to change the mindsets of people in the society,” she said.

After the parade, she tweeted, “Jammu’s first LGBT pride parade. Glad to be there. Proud of the young citizens of my city who organised it. They give me hope.”

In the erstwhile state of Jammu and Kashmir, there were 477 transgender people as per the 2011 Census. But only 98 of them had registered with the Department of Social Welfare. However, there is no official or unofficial written documentation that describes their lifestyles, or how they became an established group.

They have a very limited number of job options in Jammu and Kashmir.

Arnavi, who is probably the first artist in Jammu from the transgender community, says that she didn’t get any scholarship from Jammu university while pursuing her degree. “Lack of educational opportunities also suppresses us,” she says.

Over the past few years, the community, which was already ostracised and a victim of abuse, was pushed deeper into misery by the communication blackout in the region and the COVID-19 pandemic. Members of the community launched protests in the city last month to raise their voice against mistreatment and lack of opportunities. They were allegedly beaten up by the police.

Anmol Ohri, the founding director of Climate Front, the NGO that organised the pride parade, told The Wire that the problem lies in society. “When we fail as a society to accept them, what do we expect from others? He adds that when members of the LGBTQ community don’t have full educational rights here, who can they give them jobs? We all want the implementation of the Transgender Bill, through which they can get full rights,” he said.

Another transwoman, Anupali (*name changed), participated in the parade. She did not want her identity to be revealed to her family members or acquaintances, so she wore a mask to conceal her face.

“Even our parents don’t treat us well. Many among us were forced to leave our homes by family members. The Almighty has also created us and we are just humans. From family to society, there is rejection. Through the pride parade, perceptions among the people will change,” Anupali said. 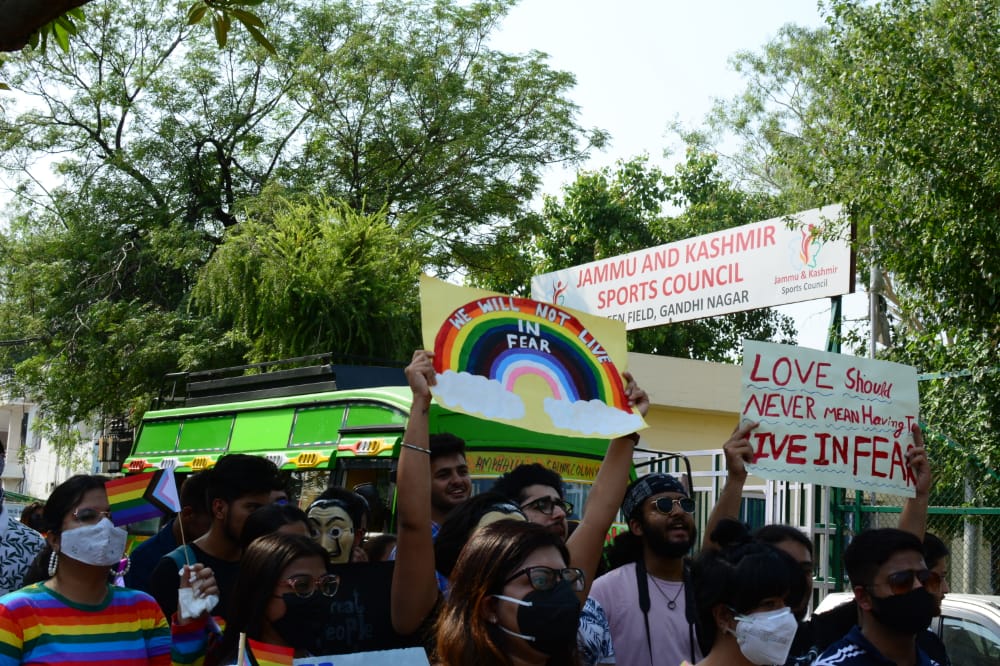 Many transgender children are forced to quit school because of bullying or harassment. One of the most common sources of bullying is family members. A transgender person is typically seen as a “danger to family honour”. Because of this, the majority of transgender people are asked to leave their ancestral homes. Most of the time, their siblings and even parents deny them their property rights.

Arnavi says she was ignored by her family at first and whenever she went out of the home, people in her vicinity often passed vulgar comments.

Sushail Raina*, who is a student of law, and the founder of ‘Queers from Jammu’ told The Wire that the Supreme Court in its landmark NALSA judgment created the ‘third gender’ status for hijras or transgender persons.

The order gave people the right to self-identification of their gender as male, female or third gender.

Raina said earlier, transgender people were forced to describe themselves as either male or female. But after the judgment, they could proudly identify themselves. “But apart from this, what made this judgment so special was that it laid down the framework to guarantee the transgender community a whole spectrum of basic human rights,” Sushail adds.

Nazir Ahmed, a social activist, says like any other person, members of the LGBTQ community deserve love and affection and not rejection. Nazir has seen many transgender persons become destitute and says the government needs to ensure this does not happen anymore.

Sushail argues that the Supreme Court has directed the government of India to treat the members of the “third gender” as an economically and socially backward class.

“It was also stipulated that government should make proper policies for the transgender community in the light of Articles 15(2) and 16(4) to ensure equality of opportunity in education and employment. As per the judgment, the third gender would be categorised as part of the other backward classes (OBC), to confer them the benefit of reservation about government jobs and educational institutions,” he added

The court also made the important observation that a “conflict between one’s birth gender and identity is not essentially a pathological condition”.

“So, rather than adopting a ‘treatment of the abnormality’, the focus should be on ‘resolving distress over a mismatch’,” he told The Wire.

Another transgender person who was also part of the pride parade told The Wire on the condition of anonymity that they were mocked by friends, family and strangers because of their sexual identity while growing up.

“My relatives were hostile, and my neighbours would frequently make fun of me. I was the only member of my family who had never received a wedding invitation. Because of my identity, my family stopped talking to me, and some of my relatives would leave social gatherings if they spotted me approaching them on the street,” they added. 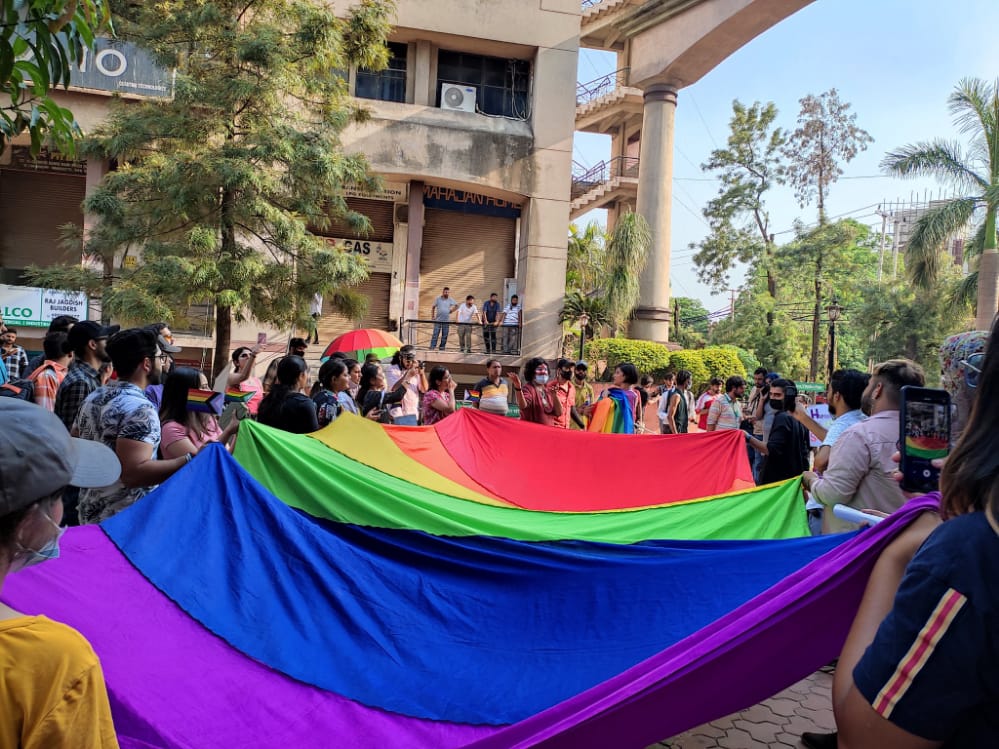 An initiative for safer places

The stakeholders of the Climate Front are planning to create a safe place for the transgender community in Jammu. “We have seen that the conditions of other marginalised communities have improved because of access to education and raising of awareness. The same can be done with the LGBTQ community. We always talk about gender equality, but there is little action. By creating a safe space, we hope to take the first step,” Anmol told The Wire.

Sushail told The Wire that this step would also be in line with the Supreme Court’s directives. The court emphasised that discrimination based on sexual orientation is unconstitutional, considering it is a natural phenomenon as proven by scientific and biological facts.

“It also directed the government to create public awareness regarding LGBT rights and to eliminate the stigma surrounding the LGBT people. It elaborated upon the issues surrounding mental health, dignity, privacy, right to self-determination,” he said.

Anom said the Supreme Court’s orders and the laws that have been put in place need to be implemented on the ground.

*Names of some persons have been changed to protect their identities.

Mubashir Naik is an independent journalist based in Jammu and Kashmir and tweets at @sule_khaak.