'In India, marriage is considered a sacred 'sanskar', whereas in other countries, marriage is a contract,' the UP government counsel said. 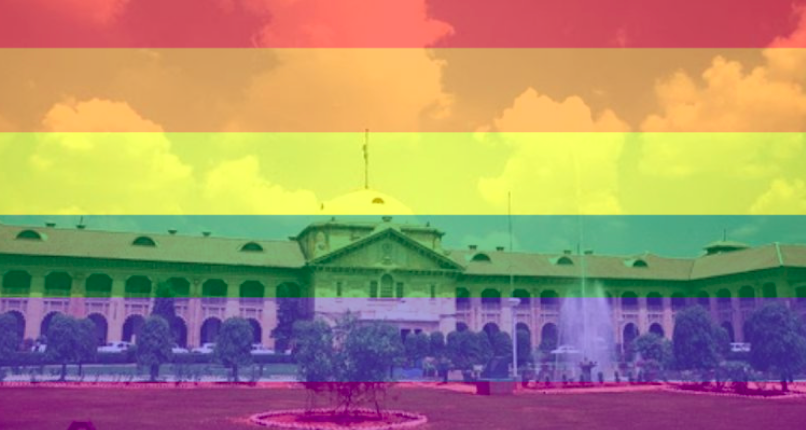 The Allahabad HC with the colours of the LGBTQ+ rainbow flag on it.

New Delhi: The Allahabad high court on Thursday, April 14 rejected a plea by two women to recognise their marriage on the argument that such a union was not opposed by the Hindu Marriage Act.

Opposing their plea, the Uttar Pradesh government’s counsel claimed that same-sex marriage was against Indian culture and Indic religions, and was invalid under Indian laws.

The women contended that the Hindu Marriage Act talks about the marriage of two people and homosexual marriage has not been opposed by the legislation.

According to LiveLaw, they claimed that their fundamental rights would be compromised if they did not get their right to same sex marriage while placing reliance on the fact that more than 25 countries in the world had recognised same sex marriage.

However, the state government counsel said, “In Hindu culture, marriage is one of the ‘sanskar’ and can be performed between a man and a woman (sic).”

“Our country runs according to the Indian culture, religions, and Indian law. In India, marriage is considered a sacred ‘sanskar’, whereas in other countries, marriage is a contract,” the counsel said.

The state government further submitted that in the absence of a man and a woman, a marriage cannot be accepted in the Indian environment as it was beyond the Indian family concept.

“It will have an adverse effect in various laws of India, which have been made keeping in mind the men and women,” the state government said.

The court, therefore, rejected the women’s request. It also disposed of the mother’s habeas corpus plea, seeking the custody of her 23-year-old daughter who, she alleged, was illegally detained by a 22-year-old woman.

The Supreme Court had on September 6, 2018 read down Section 377 of the Indian Penal Code, which was effectively used to criminalise homosexual relations in India for more than a century. However, the government had asked that the top court to not rule on related matters such as marriage rights for the LGBT community.

On April 7, the women presented themselves in the court of Justice Shekhar Kumar Yadav and said that they got “married” to each other and pleaded that the union be recognised.

In February 2021, the Union government had told the Delhi high court that in reading down the provision of Section 377 of the IPC covering homosexuality, the apex court had only decriminalised “a particular human behaviour” but “neither intended to, nor did in fact, legitimise the human conduct in question”.

The Union government was responding to three petitions seeking legalisation of same-sex marriage.

Living together as partners or in a relationship with a same-sex individual is “not comparable” with the “Indian family unit concept” of a husband, wife and children, the government had said, arguing that the institution of marriage has a “sanctity”.

Despite multiple petitions highlighting that the right to legal recognition of same-sex marriage is a fundamental right under Articles 14, 15, 19 and 21 of the constitution, irrespective of a person’s gender, sex or sexual orientation, the Union government has always followed the “Indian” definition of marriage.