It is not for the vice president to decide whether the charges levelled by MPs in their motion amount to "proved misbehaviour" on the part of the chief justice. That prerogative, by law and precedent, belongs to parliament. 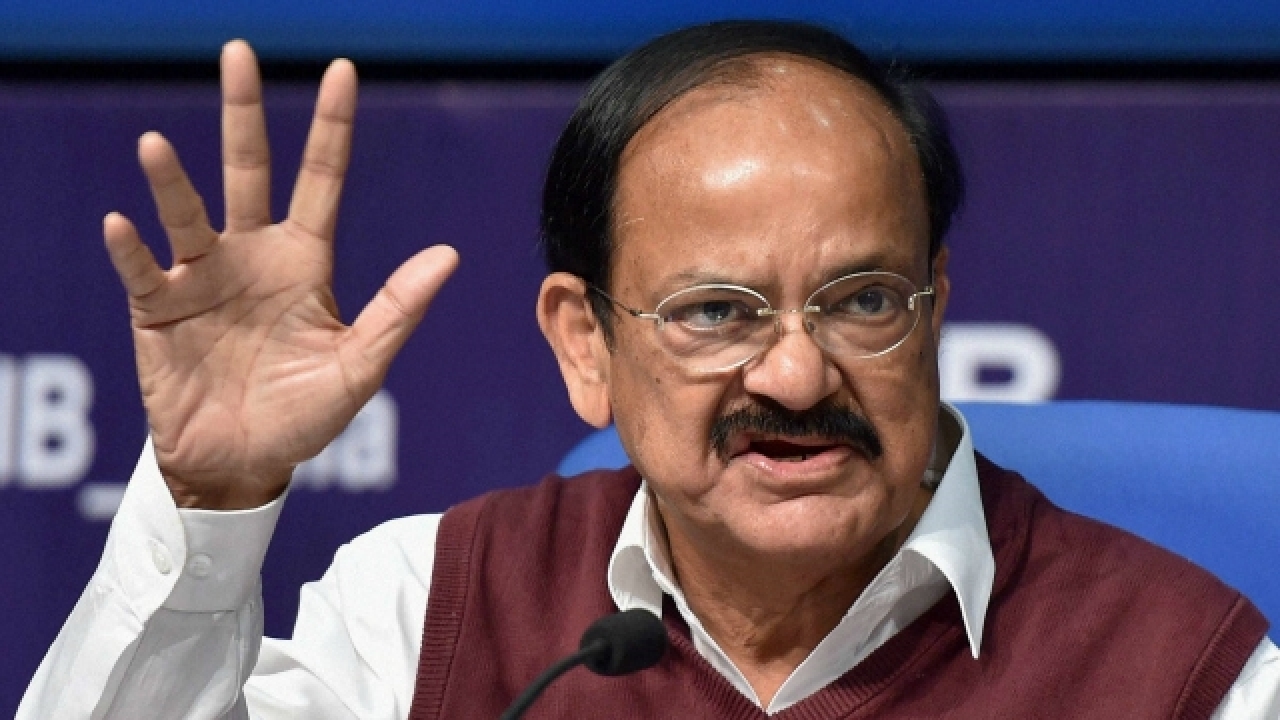 New Delhi: In refusing to admit the motion seeking initiation of impeachment proceedings against the Chief Justice of India, Vice President M. Venkaiah Naidu – who is also ex-officio chairman of the Rajya Sabha – provided a reasoned decision running into 10 pages. However, his reasoning is not likely to withstand legal scrutiny, if challenged via a writ in the Supreme Court.

Section 3 (1) of the Judges Inquiry Act says that the speaker of the Lok Sabha or, as the case may be, the chairman of the Rajya Sabha may – after consulting such persons, if any, as he thinks fit and after considering such materials, if any, as may be available to him – has the power to either admit the motion or refuse to do so.

Thus it is clearly envisaged that the chairman may refuse to admit a motion duly presented to him by MPs. If he refuses to admit the motion, he is, of course, not under any obligation to constitute a committee consisting of three members for the purpose of making an investigation into the grounds on which the removal of a judge is prayed for.

The Act, however, is silent on the circumstances under which the chairman or the speaker can refuse to admit a motion.

The first flaw in Naidu’s decision is that he erroneously assumes that his responsibility to admit – or reject – the motion is a parliamentary procedure. Thus Naidu cites the phrase “proved misbehaviour” used in Article 124(4) of the constitution on impeachment, and contends that the prefix “proved’ places an obligation of actually proving the misbehaviour before the actual procedure for removal of a judge can come into play. “At the stage of admission, I have to apply a test that if every statement stated in the petition is believed to be true, would it still amount to a case of “proved misbehaviour” within the scope of Article 124(4) of the constitution of India”, he writes in his order.

This is where he has gone wrong.

“A judge of the Supreme Court shall not be removed from his office except by an order of the president passed after an address by each house of parliament supported by a majority of the total membership of that house and by a majority of not less than two-thirds of the members of the house present and voting has been presented to the president in the same session for such removal on the ground of proved misbehaviour or incapacity.”

Based on this standard of “proved misbehaviour”, Naidu punches holes in the motion by pointing out references which suggest that the MPs, who lent their signatures to the motion, are themselves unsure about whether the allegations can be substantiated.

He refers to the use of phrases such as the CJI “may have been involved in a conspiracy of paying illegal gratification”, the CJI “was likely to fall within the scope of investigation”, and “the CJI appears to have ante-dated an administrative order” in the motion, and concludes: “The phrases used by the hon’ble members of parliament themselves indicate a mere suspicion, a conjecture or an assumption. The same certainly does not constitute proof “beyond reasonable doubt”, which is required to make out a case of “proved misbehaviour” under Article 124(4).”

Naidu may well be correct in his analysis of the motion. But it is not for him to insist on proof of misbehaviour. This is because the parliamentary procedure for the removal of a judge does not come into play with the mere admittance of a motion, as he assumes.

For his erroneous assumption, Naidu relies on the Supreme Court’s judgment in In Re: Mehar Singh Saini (2010). This is his second mistake.

The adjudication of the ground of misbehaviour under Article 317 (1) is to be by the Supreme Court, whereas in the case of a judge, who is a higher constitutional functionary, the requirement of judicial determination of the ground is reinforced by the addition of the word ‘proved’ in Article 124(4) and the requirement of law for this purpose under Article 124(5).   The Supreme Court adds in this judgment that the expression ‘misbehaviour’ generally refers to a conduct which might erode the faith and confidence of the public at large in such constitutional office.

Thus In Re: Mehar Singh Saini does not throw any light on when a parliamentary procedure to remove a judge kicks in after the motion is presented by the members of the house to its presiding office.

However, In Re: Mehar Singh Saini relies on another previous judgment of the Supreme Court, Sub-Committee on Judicial Accountability v Union of India, delivered by a constitution bench on October 29, 1991. In this case, the speaker of the Lok Sabha had admitted the motion for the removal of Justice V.Ramaswami of the Supreme Court, upon a notice given by 108 members of 9th Lok Sabha, for his alleged misconduct during his term as the chief justice of the Punjab and Haryana high court. Subsequently, the Lok Sabha was dissolved, and its term came to an end.

The Centre, after the constitution of the 10th Lok Sabha following general elections in 1991, had taken the view that the motion – as well as the decision of the speaker admitting it – had lapsed consequent on the dissolution of the previous Lok Sabha. Therefore, it did not let the inquiry committee set up by the previous speaker to probe the allegations against Justice V.Ramaswami discharge its functions.

At that point, the Sub-Committee on Judicial Accountability – constituted by the All India Convention on Judicial Accountability, and the Supreme Court Bar Association – filed writ petitions in the Supreme Court, seeking to prosecute the matter in the larger public interest.  The petitioners sought directions to the Centre to take immediate steps to enable the inquiry committee to discharge its functions under the Judges (Inquiry) Act and, second, that during the pendency of the proceedings before the committee, Justice Ramaswami should be restrained from performing judicial functions and from exercising judicial powers. The petitioners also contended that impeachment motions were sui generis in their nature, and, therefore, did not lapse.

The constitution bench by a majority of 4:1 held that a motion under section (2) of the Act does not lapse upon the dissolution of the Lok Sabha. The bench, however, refused to restrain Justice Ramaswami from performing judicial functions, and exercising judicial powers, leaving it to his sense of propriety, and to the judicial tradition symbolised by the views of the CJI. The bench expressed the hope that a desirable convention would be followed by the judge in that situation, which would not require the exercise of a power of suspension, during the inquiry.

But what the bench observed on the question of when the parliamentary procedure for impeachment would kick in, is relevant to understand the present controversy. The bench held:

“The scheme of Articles 124(4) and (5) is that the entire process of removal is in two parts – the first part, under clause (5) from initiation to investigation and proof of misbehaviour or incapacity is covered by an enacted law, parliament’s role being only legislative as in all the laws enacted by it, the second part under clause (4) is in parliament and that process commences only on proof of misbehaviour or incapacity in accordance with the law enacted under clause (5). Thus the first part is entirely statutory, while the second part alone is the parliamentary process.”

The bench then added:

“The constitution intended a clear provision for the first part covered fully by enacted law, the validity of which and the process thereunder being subject to judicial review independent of any political colour and after proof it was intended to be a parliamentary process. It is this synthesis made in our constitutional scheme for removal of a judge.”

In his third mistake, Naidu wrongly cites the Supreme Court’s judgment in M.Krishna Swami v Union of India (1993), which also revolved around Justice Ramaswamy’s impeachment matter.  As he relied on this judgment for guidance, let us examine the relevant paragraph cited by him. The crucial sentence is this:

“He (the chairman) need not weigh the pros and cons to find prima facie case. He acts neither as a quasi-judicial nor an administrative authority but purely as a constitutional functionary and with high sense of responsibility and on due consideration of ‘the record’ and arrives at a decision to admit or refuse to admit the motion to remove the judge.”

However, the factual matrix of M. Krishna Swami is such that it does not support Naidu’s reliance on it. The petitioner in this case was aggrieved that the then speaker of the Lok Sabha had admitted the motion for removal of the Justice  V. Ramaswami. In other words, the Supreme Court made these observations to justify the admission of the motion by the speaker. Naidu, however, uses the same observations to justify his refusal to admit the motion! After reading it again and again, one wonders which part of the paragraph convinced Naidu that the motion deserved to be rejected.

Merely claiming that he consulted many constitutional experts, as required by the Act, is not sufficient to show why his decision is justified. Naidu seems to have emphasised these procedural aspects to answer the possible challenge that he did not apply his mind before refusing to admit the motion. Still, the speed with which he took the decision – in order to make it public before 10.30 in the morning when the Supreme Court judges begin hearings for the day – is surely astonishing.

Had Naidu cited the entire paragraph 44 of the Supreme Court’s judgment in M. Krishna Swami   – he has cited only one part of this paragraph, that too selectively – he could have got the necessary guidance as to how to decide the motion before him. The portions which he did not cite, read as follows:

“Existence of definite material or evidence in support of the grounds of the motion, before initiation of the motion – for removal of the judge is, thus, a condition precedent.  Lest it would be an open invitation to initiate, for obvious reasons, proceedings to remove the judge and then resort to collecting perjured evidence in support thereof against the judge which is subversive of judicial independence and a death-knell to rule of law. Action in any other way, the speaker would forfeit the trust reposed by the founding fathers of the constitution in that office as well as the confidence of the House of People, i.e., the people of Bharat themselves.”

Thus it is the existence of definite material or evidence in support of the grounds of the motion – and not whether the material submitted constitutes “proof” of the misbehaviour of the judge concerned – which should have been the criterion for Naidu to accept or reject the motion.

Unfortunately, Naidu’s order smacks of poor understanding of the law and precedent, and pre-empts the role of the inquiry committee – which he did not set up, and which alone can determine whether the material submitted by the MPs constitutes proof of misbehaviour of the judge in question.

It is true that the motion to remove the CJI has no prospect of being carried, with the proposers of the motion being vastly outnumbered by those against. But, as pointed out by the eminent academic, Mohan Gopal – who was the jurist member in the inquiry committee set up to probe the allegations against Justice P. D. Dinakaran – the first goal envisaged in the constitutional and statutory provisions is establishing the truthfulness of the charges of misbehaviour or incapacity of a judge. This is an end in itself – and not merely a means to the end of removal from office – because the polity of any country will be severely harmed if serious allegations of misbehaviour of high officials are allowed to be left unaddressed.