'There were a lot of expectations that the government will do something. But major reason for reduction is wind.' 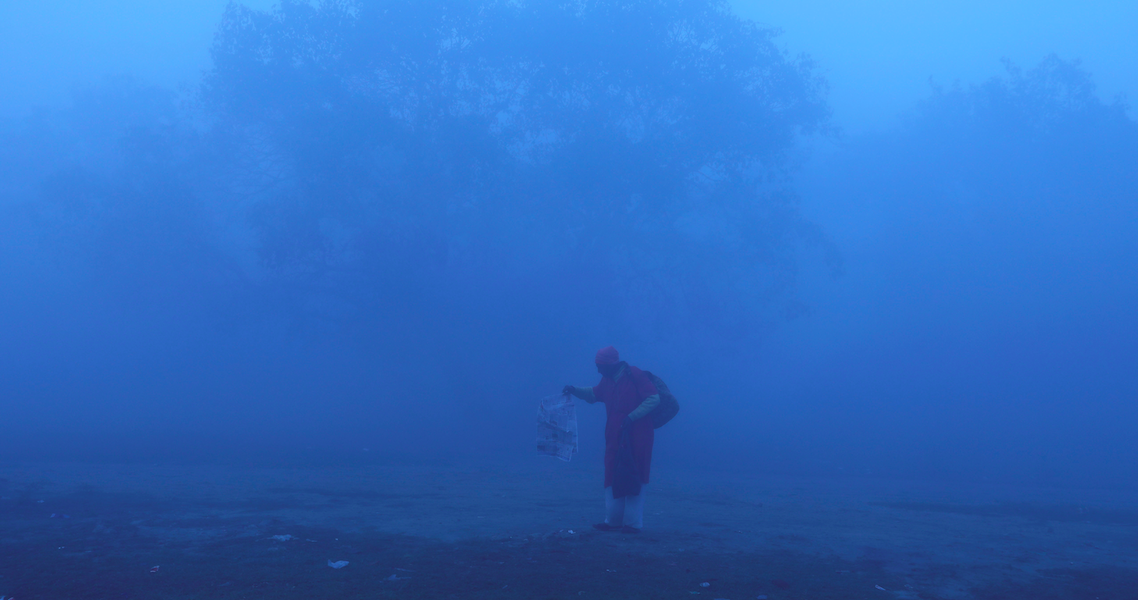 FILE PHOTO: A man holds a newspaper on the banks of the Yamuna river on a smoggy morning in New Delhi, India, November 19, 2021. Photo: Reuters/Anushree Fadnavis

New Delhi: The Supreme Court on Wednesday, November 24, continued to be stern with the Union and the governments of the National Capital Region, asking them to be aware of the signals India is sending to the world when it comes to tackling pollution in Delhi.

“This is the national capital. Look at the signals we are sending to the world. You can stop these activities in anticipation itself so the severe grade does not happen,” said the bench of Chief Justice N.V. Ramana, Justices D.Y. Chandrachud and Surya Kant.

The bench asked the governments to continue implementing for a few days the measures to ensure improvement in air quality, saying that preventive actions are needed in anticipation to curb pollution.

“When the weather becomes severe then we take measures. These measures have to be taken in anticipation, and this anticipation has to be based on a statistical model and scientific study and pattern,” the bench said.

“There were a lot of expectations that the government will do something. But major reason for reduction is wind,” the CJI Ramana, notably, said.

LiveLaw has reported the apex court having called for the measures suggested by the Commission for Air Quality Management in the NCR and Adjoining Areas to deal with industrial pollution, thermal plants, vehicular emissions, dust control, diesel generators as well as encouraging work from home be continued for the time being.

“Take the measures for the next two-three days and we will hear this matter next Monday. In the meantime if pollution becomes 100 (referring to the AQI) etc. then you can lift some ban,” it said.

Referring to the submissions of Solicitor General Tushar Mehta on automatic graded action plan in view of worsening air pollution, the top court said these are ad hoc mechanisms and the commission on pollution will have to undertake a scientific study and take preventive action in anticipation.

“You have the wind pattern for next seven days. You have to take measures consistent with the wind direction. What are the steps you need to take, and what will be impact of those steps for the next seven days? Somebody has to conduct that study. It must be science based,” Justice Chandrachud said.

On stubble burning, the bench wondered as to what bureaucrats were doing and said that officials like chief secretaries and others should go and meet farmers, experts and scientists.

“As a government lawyer and we judges are discussing this. What the bureaucracy has been doing all these years? Let them go to villages, they can go to field, talk to farmers and take a decision. They can involve scientists and why cannot this happen,” the bench observed.

On the issue of construction workers, the bench said the states have huge funds on account of labour cess collected from real estate firms and that can be used for paying the workmen who have been deprived of their livelihood due to the ban.

“Can the construction workers’ fund be used as long as workers are out of work…How much money is there in labour welfare fund. You pay the workers from that,” it said.

At the outset, Mehta referred to measures which are still in force to deal with the spike in the air pollution and said that the situation, which is being monitored, will be reviewed in a few days.

He said the measures like banning the entry of trucks, except few exceptions, complete closure of all public and private educational institutions, and closure of six thermal power plants in the 300 km radius of the national capital are still in force.

Earlier, the bench had directed authorities to ensure implementation of the decisions taken in a meeting to curb air pollution, observing that it cannot get into the nitty gritty and the bureaucracy has developed a “sort of inertia” of not taking decisions which are left to the courts.