The apex court has deleted the condition imposed by the Bombay high court under which the activist had to surrender in three months from April. 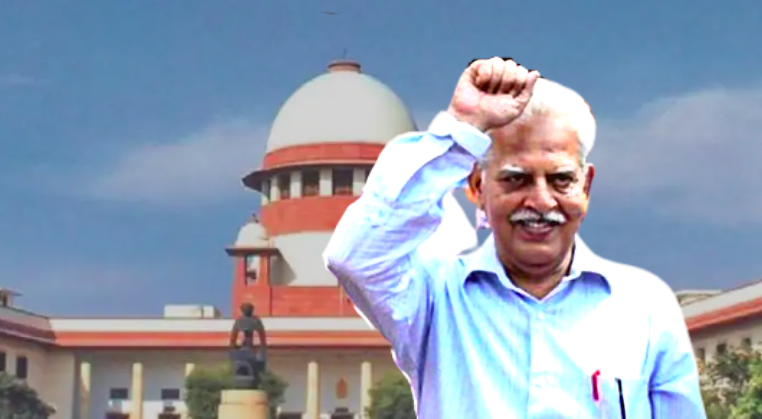 Varavara Rao. In the background is the Supreme Court. Photos: File

New Delhi: The Supreme Court has granted activist and poet Varavara Rao – held as an undertrial in the Elgar Parishad case since August 28, 2018 – permanent bail on medical grounds.

Out on medical bail since March 6, 2021, the 82-year-old had moved the Supreme Court for permanent bail on the same grounds after his plea was rejected by the Bombay high court on April 13.

The apex court has deleted the condition imposed by the high court, which had said that he should surrender in three months.

A bench of Justices U.U. Lalit, Aniruddha Bose and Sudhanshu Dhulia took into account Rao’s age, his medical conditions and also the two-and-half years he spent in custody, LiveLaw has reported.

“The medical condition of the appellant has not improved to such an extent over a period of time that the facility of bail which was granted earlier be withdrawn. Considering the totality of circumstances, the appellant is entitled to bail on medical grounds,” the bench said, according to LiveLaw.

The bench observed the fact that charges are yet to be framed in the case – even though a charge sheet has been filed.

“The trial will take at least 10 years even if it starts today and there are 16 accused,” Rao’s lawyer Anand Grover submitted.

Of the 16 arrested in the case, Jesuit priest Father Stan Swamy passed away in custody last year. His associates allege that serious medical negligence led to his death.

“How long should I be in jail? Till death? I should die in jail. They want me to die in jail like Stan Swamy,” Grover said, at another part of the hearing.

Additional solicitor general S.V. Raju, appearing for the NIA, said the accused were to be blamed for delaying the trial by filing repeated applications. Raju also argued against Rao being at risk of Parkinson’s disease and held that his health condition “was not very serious.”

Rao, who has early signs of Parkinson’s disease according to his counsel, had submitted to the apex court that “any further incarceration would ring the death knell for him as advancing age and deteriorating health are a fatal combination.”

Justice Lalit, during the hearing, noted that the investigating officer had “sufficient opportunity” to interrogate Rao in custody. To this, ASG Raju appeared to allege that during that period too, he was “in hospital most of the time.”

Noting that it was not the NIA’s case that Rao has misused his liberty, Justice Lalit asked the ASG how “long it will take for the trial to complete.” Raju said it will take one and a half years.

Citing the UAPA charges against Rao, Raju said, “Age is not relevant owing to the gravity of the offences. Please see his conduct. He is trying to overthrow the democratically elected government.”

After the Supreme Court announced its verdict, ASG Raju said, “Now many will come for bail saying he has a headache.” Hearing this, the bench laughed, according to LiveLaw‘s live tweets from the hearing.

As part of bail conditions, Rao has been asked not to leave the Greater Mumbai area without permission from the Special NIA Court of Mumbai. He cannot “in any way misuse his liberty, nor shall he get in touch with any of the witnesses or try to influence the course of investigation,” the court said.

Rao also has to keep the NIA, which is investigating the Elgar Parishad case, abreast of medical attention received by him.

The Elgar Parishad case has been criticised internationally as a witch-hunt against activists, scholars and lawyers who are critics of the establishment and assist marginalised communities.

Grover also noted during the hearing that in the chargesheet of the case, “no death at all” and “no terrorist” activity has been pinned to the accused. “It is all based on electronic evidence which we are disputing,” he said.

In late June this year, security researchers in the United States claimed that they had unearthed evidence that links the Pune police to the hacking of e-mail accounts of not only Varavara Rao but also Rona Wilson and Delhi University professor Hany Babu. This is the first time that the state’s involvement has been directly established in the case.

Amnesty International, in its responses to the Supreme Court-appointed panel to investigate alleged misuse of the Pegasus spyware in India, said it has confirmed that Rona Wilson – another accused in the Elgar Parishad case – was targeted. His phone was compromised “by a government customer using the Pegasus spyware tool in the weeks and months before he was arrested by Indian authorities”, the human rights organisation said.

“Eight defendants in the Bhima Koregaon case, including Rona Wilson, were also listed as potential Pegasus targets in the Pegasus Project dataset before their subsequent arrests,” it added.