Uttar Pradesh Sunni Central Waqf Board had issued a statement calling the action "illegal" and a violation of the Allahabad high court directive issued the day after it was demolished.

Photos of the mosque and compound in Barabanki, before (L) and after (R) the May 17 demolition. Photo: Special Arrangement

New Delhi: Uttar Pradesh’s Barabanki Police on Thursday booked eight people for being part of a committee that allegedly committed “fraud and cheating” to get Ghareeb Nawaz Mosque, which was demolished on Monday, registered as a Waqf property. The case was lodged at the Ramsanehi Ghat police station late on Thursday night.

The Wire had earlier reported that there was a wave of arrests in the two months prior to the demolition of the mosque as close to 180 people were booked for protesting the district administration’s decision to demolish the mosque.

Several people were arrested and continue to be in jail. One Ishtiyaq was charged with the National Security Act and arrested in April.

The complaint says the mosque was “fraudulently registered” in 2019 under the Waqf Board, as per the documents shared by the mosque authorities.

Uttar Pradesh Sunni Central Waqf Board had issued a statement calling the action “illegal” and a violation of the Allahabad high court directive issued the day after it was demolished.

The members have been charged with Sections 419 (punishment for cheating by personation), 420 (cheating and dishonestly inducing delivery of property), 467 (forgery of valuable security, will, etc), 468 (forgery for purpose of cheating) and 471 (using as genuine a forged document or electronic record) of the Indian Penal Code.

Sonu Kumar, district minority welfare officer, is the complainant in this case. The complaint says that these people formed a “committee” and through cheating and fraud got the structure registered as a Waqf property on January 5, 2019.

The complaint further reads, “This was done under a conspiracy, which included these people and also then UP Sunni Central Waqf Board inspector Mohammad Taha.”

Barabanki BJP MP Upendra Singh Rawat had also written a letter to the Uttar Pradesh chief minister seeking action against members of the Waqf Board for alleged land-related violations in other areas as well. Samajwadi Party MP from Moradabad, S.T. Hassan, who is also a member of the Sunni Wakf Board, is challenging the move. 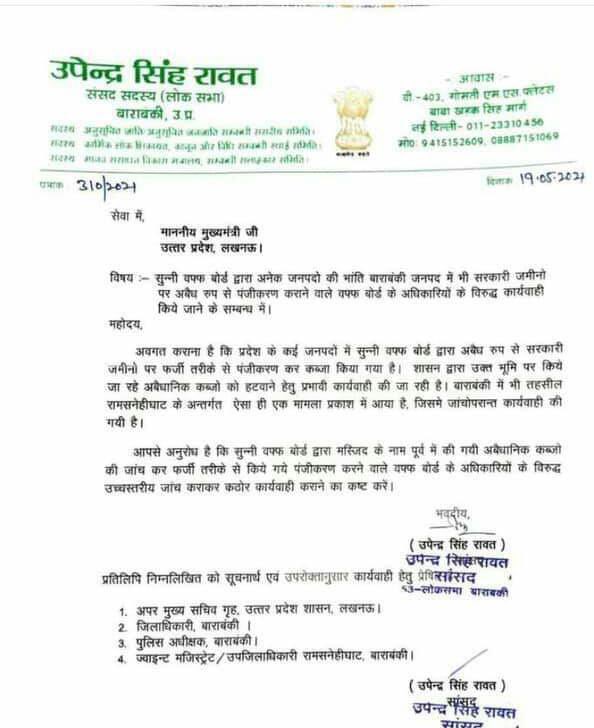