The court's new Record Room Digitisation Centre, in conjunction with e-reading devices installed in the courtrooms, allow judges to read scanned and bookmarked copies of case records with just a click of the mouse. Bhubaneswar: The Orissa high court has set a new benchmark for record digitisation, a process critical to keeping courts running quickly and smoothly, creating a ‘win-win’ situation for not only the bar and bench, but also the public.

Though work on the digitisation of records began in the high court in 2018, it gained significant momentum after Justice S. Muralidhar became its Chief Justice on January 4 last year. One of the pioneers of the concept of paperless court back when he was a judge of the Delhi high court, Justice Muralidhar gave the digitisation initiative renewed vigour.

After Justice D.Y. Chandrachud, the chairperson of Supreme Court’s e-Committee, inaugurated the high court’s new, state-of-the-art Record Room Digitisation Centre (RRDC) near the Odisha Judicial Academy building in Cuttack on September 11, 2021, as many as 1,56,723 legacy records or ‘disposed-of’ case records had been scanned and digitised by the end of last year.

Justice Chandrachud’s September visit was momentous also because it marked the beginning of the transition of Orissa’s courts and offices to the paperless mode. Since he set the wheels in motion, three more justices from the state’s top court are presiding over paperless courts.

These paperless courts leverage technology to great effect, allowing their judges to read scanned and bookmarked copies of case records on customised ‘Wacom’ e-reading devices which help them navigate through voluminous case records with only the click of a mouse. And Anupam Patra, the man heading the record digitisation project, is confident that work will accelerate further in the days to come and more and more courts will become paperless.

Jitendra Kumar Lenka, secretary of the Orissa High Court Bar Association, is full of praise for the initiative. “Being a ‘court of record’, the high court has to ensure that its legacy records are stored and preserved securely and that access to these documents is not only convenient, but also less time consuming,” Lenka said. “This initiative will not only help lawyers, who can now get certified copies of judgements within an hour, but will also make the job of judges easy. Following digitisation, case records for their reference are now just a click away. Moreover, the litigant public stands to gain equally. It’s a win-win situation that will save both time and money.”

The transition to paperless courts would not have been possible without the establishment of the RRDC, a sprawling complex spread over a two-acre plot located about a kilometre away from the high court building. It is equipped with a state-of-the-art fire-fighting system and surveillance-security measures; two must-have features for a building housing the most important legal records of the state.

The RRDC provides facilities for the storage, digitisation, preservation and retrieval of disposed-of case records or legacy records, all under one roof. These records are now accessible for reference from the court room or any bench over a closed and secure network.

While the digitisation of the existing legacy records is being done on a massive scale, a section of the RRDC has been set aside for fragile records which are so old that it is not possible to open and scan them. This Fragile Record Room contains legacy records dating back to the early-1800s from the Patna, Calcutta and Madras high courts. Before the Orissa high court was established in 1948, cases from Orissa were dealt with mostly by the Patna and Calcutta high courts. 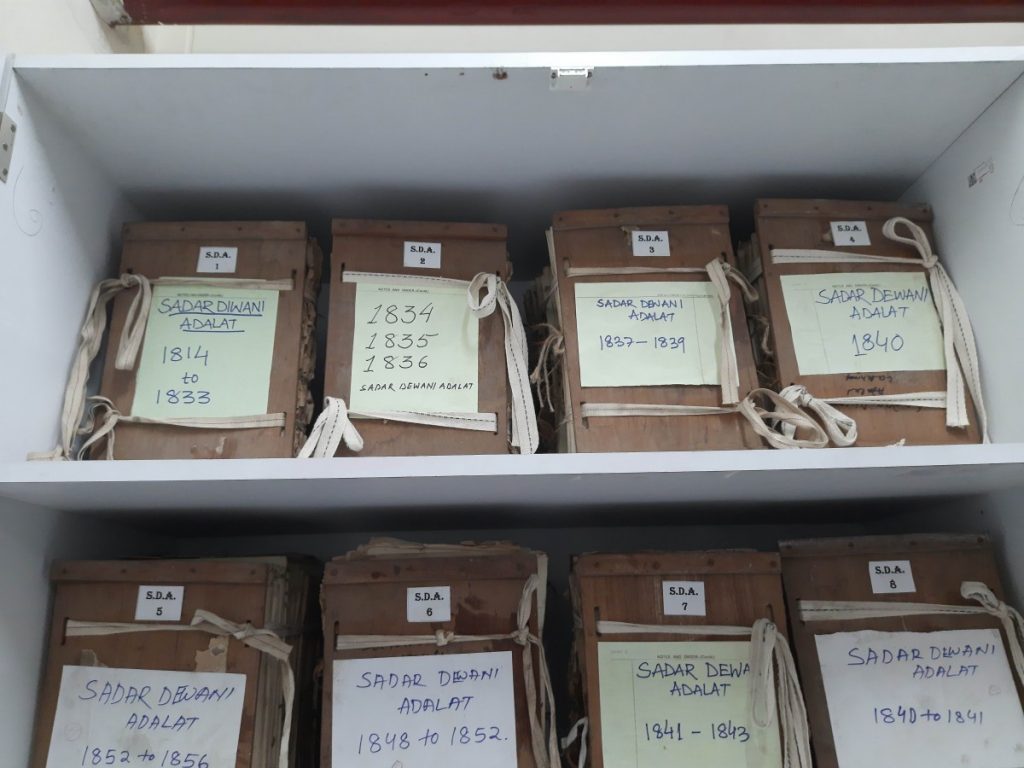 Since they cannot be digitised, these fragile records have been kept in their original form under special care for long-term preservation. They include some very interesting records, like that of a case dating back to 1917 that was pleaded by Janaki Nath Bose, an eminent lawyer of his time and father of Cuttack-born freedom fighter Netaji Subhas Chandra Bose. 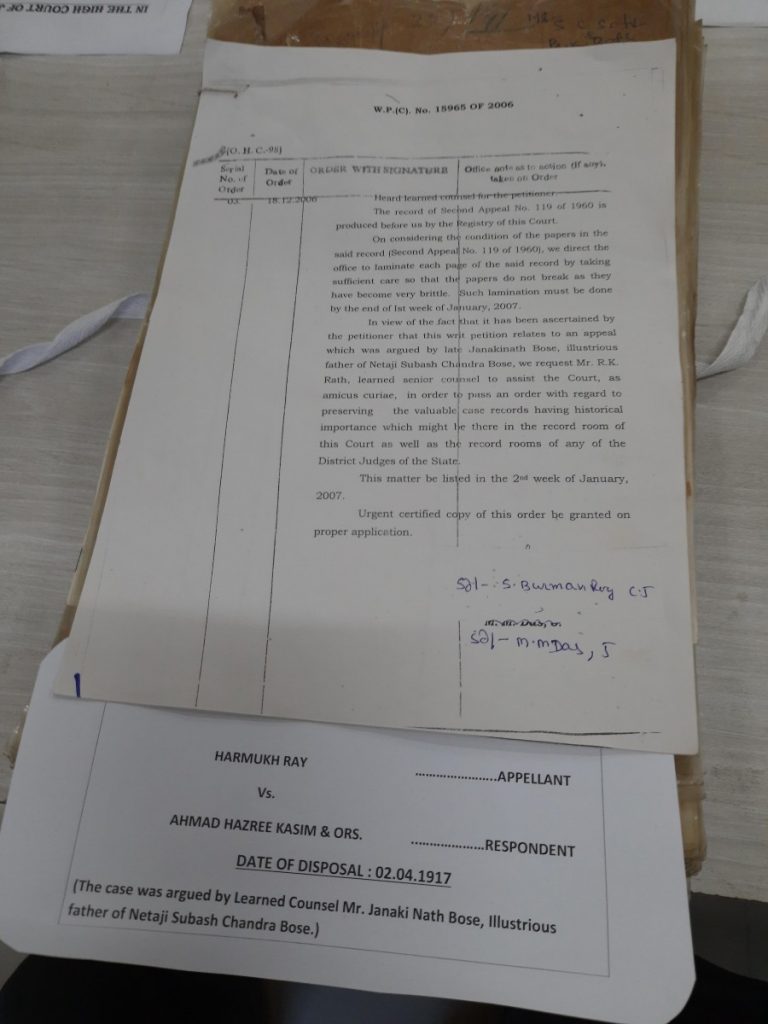 The records of the case argued by Janaki Nath Bose in 1917. Photo: Ashutosh Mishra. 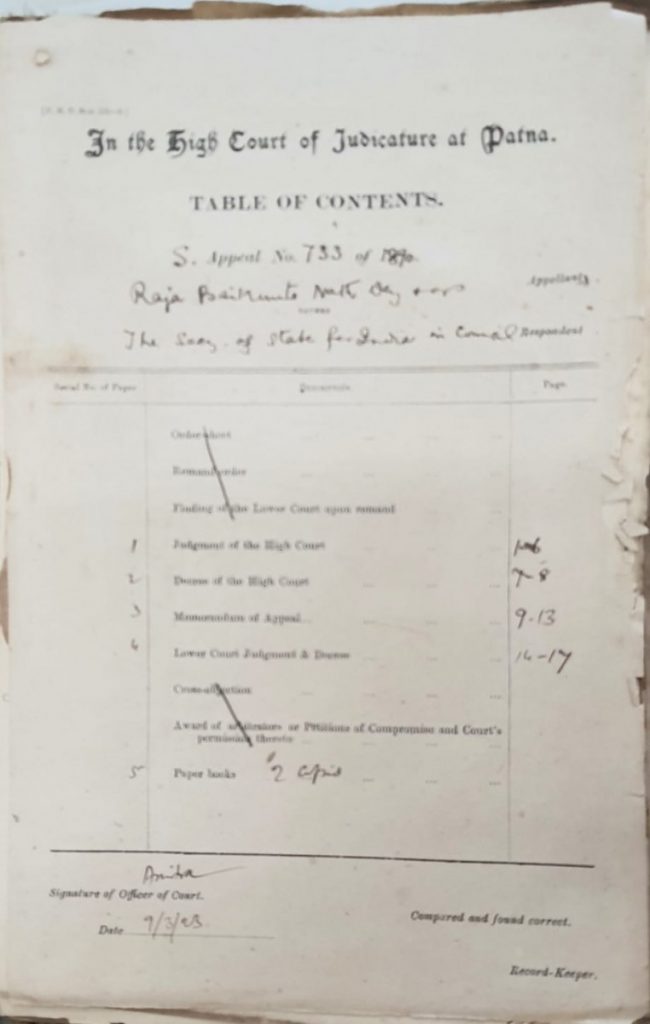 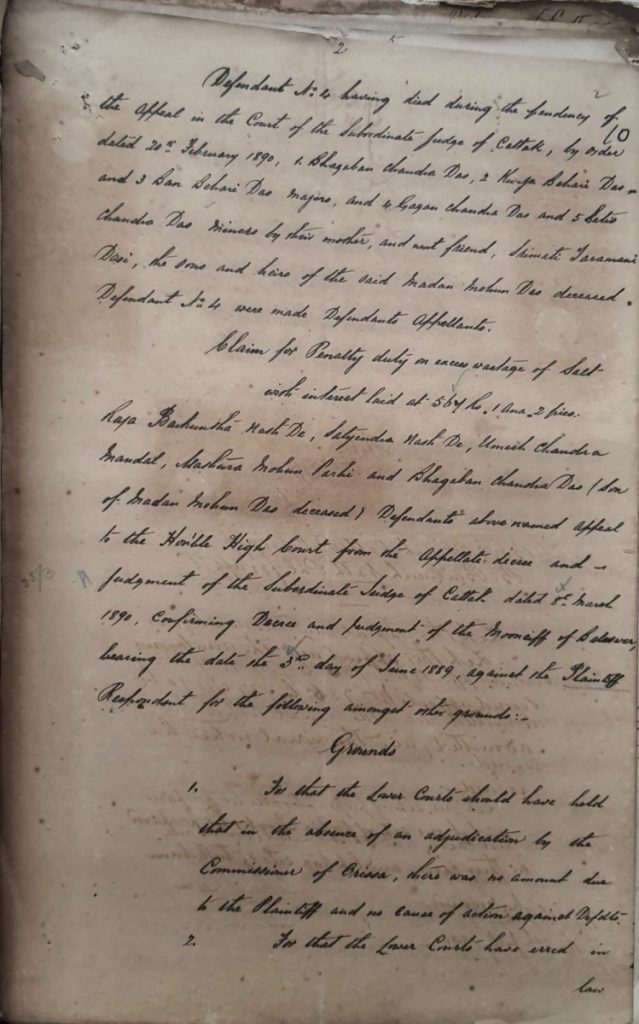 High court sources said that while the scanning and digitisation of records from the court as well as some other district court records is being done with the technical assistance of the National Informatics Centre (NIC) and Odisha Computer Application Centre (OCAC), the nodal IT agency of the state government, the help of the Indian National Trust for Art and Cultural Heritage (INTACH) may be sought for the preservation of extremely fragile records. There is also a proposal for consulting historians and facilitating research on the evolution of the state’s judiciary through the study of these records.

Thanks to Justice Muralidhar’s initiative, the digitisation of records is underway in four districts: Balasore, Cuttack, Ganjam and Sambalpur. In addition to the high court’s records, the RRDC is also undertaking the exercise for the Cuttack district court.

“The focus, currently, is on the high court but the plan is to digitise the records of all the courts in the state in a phased manner while encouraging the e-filing of cases and eliminating the use of paper to the extent possible,” said a senior officer of the high court who did not wish to be named.

Keen to ensure the judiciary takes full advantage of the latest technology, Justice Muralidhar has launched facilities like the e-filing of cases and e-payment of court fees. Moreover, steps have been taken to provide hands-on training to advocates to familiarise them with the technology and the use of computers.

Lenka feels that such initiatives will be of great help to lawyers who must become conversant with the latest technology. “Today or tomorrow, we have to learn this. When the opportunity is knocking on our door, we must grab it with both hands,” he said.

The Orissa High Court Bar Association president Jagabandhu Sahoo, too, argues that lawyers need to be better equipped to take full advantage of the latest IT-enabled initiatives of the court. “Lawyers are equal stakeholders but not all of them are well equipped; not all of them have laptops. This aspect must also be taken into account,” said Sahoo.

But there is general acceptance and appreciation of the high court’s new IT-enabled initiatives. One of the most important developments on this front has been the evolution of what has come to be known as the ‘hybrid hearing system’; a phenomenon born out of the accessibility crisis the COVID-19 pandemic created.

The first wave of the pandemic forced not only the high court but even subordinate courts to resort to the use of information and communication technology (ICT), including video-conferencing, to conduct court proceedings and remain accessible to stakeholders. Though the situation improved considerably in 2021, concerns about re-infection remained and courts continued to hold onto the virtual hearing mode.

However, months of functioning in the virtual mode during the pandemic brought the issue of the ‘digital divide’ between advocates and litigants to the fore and the high court was keen to address the issue. To do so, it had to think in terms of a solution that would give advocates and litigants the choice of appearing either physically or virtually before courts, without hampering the seamlessness of the interaction.

This led to the birth of the ‘hybrid hearing system’ which used state-of-the-art audio and video management equipment in every functional courtroom and enabled lawyers, both physically present and those connected through video-conferencing, to address the bench seamlessly while arguing cases.

Like this hybrid mode, most of the IT-driven initiatives of the Orissa high court have gained popularity within the legal fraternity while also being appreciated by the litigant public. “It saves both time and money and makes life easy for all of us,” said Shashi Kant Mishra, a Rourkela resident who has seen many litigants suffer because of inordinate delays in the finalisation of cases.