Politicians Are Making Use of a New Trend of SLAPP Suits

BJP candidate Tejaswi Surya was able to receive a temporary injunction that barred the media from reporting allegations of sexual harassment levelled against him. 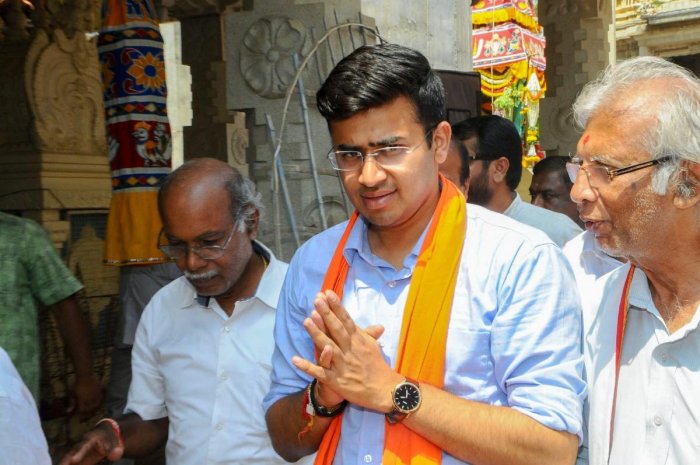 Tejaswi Surya, the Bharatiya Janata Party candidate contesting from the Bangalore South Lok Sabha constituency, approached the civil court in Bangalore on March 29, just about 20 days before the city went to polls, in the context of a #MeToo (sexual harassment) allegation against him, made on Twitter.

He was granted an interim ex-parte (without hearing the opposite party) temporary injunction, restraining 49 media houses and social media platforms, including Facebook, Twitter, WhatsApp, from “making defamatory statements against the plaintiff in any manner in electronic and print media till the defendants file their objections”.

The order justified itself by expressing skepticism with the timing of the allegation; insinuating a political conspiracy as the allegations surfaced immediately after he had filed his nomination.

Surprisingly, none of the defendants challenged the order. The Association for Democratic Reforms, an NGO concerned with free and fair elections, took up the issue and filed a PIL in the Karnataka high court, challenging the order primarily on two grounds: i)that the order violates the voters ‘Right to Know’ about a contesting candidate, under the Right to Freedom of Speech and Expression as per Article 19 (1), and ii) that the civil courts jurisdiction itself was barred as the gag order was granted in the context of an election and is hit by Article 329(B) of the Indian Constitution, as per which, the appropriate authority for the aggrieved person is the Election Commission of India. Although, the high court did not directly vacate the stay, its effect was the same.

The high court order recognised the voters ‘right to know’ about candidates, but was equally convinced, that the EC was the appropriate authority for Tejaswi Surya to approach. It is important to examine these arguments, as the possibility of contesting candidates or public officials approaching the court for a similar relief is ripe. More so, when social media has resulted in a decentralised flow of information which is often difficult to control, and the anxiety against loss of reputation is palpable. But does our free speech regime allow for pre-censorship in such situations?

The Supreme Court in Union of India vs Association for Democratic Reforms recognised the voter’s ‘Right to Know’, more specifically, information regarding involvement in criminal cases, educational qualifications and assets and liabilities of candidates contesting for any election.

The Rationale is succinctly explained in PUCL v. Union of India:

Members of a democratic society should be sufficiently informed so that they may cast their votes intelligently in favour of persons who are to govern them. Right to vote would be meaningless unless citizens are well informed about the antecedents of a candidate.

The Right to Privacy is now a fundamental right, a voter’s ‘right to know’ is limited. This is generally called as the “public-private life divide”, that the citizens have a ‘right to know’ about matters of public interest and not private details of public person’s life.

But, the question here is different. ADR’s argument is not that the voters have a ‘right to know’ about the allegations of sexual harassment, but that such an ambiguous and broad order restraining the defendants from making any defamatory remarks against Tejaswi, in any manner, causes a chilling effect on speech. That is, if one is under a fear of being sued, they are very unlikely to express freely regarding the issue and this fear would stifle public debate at a larger scale. The fear factor is further intensified when it comes to defamation, as the law itself is tilted in favour of the plaintiff and damages for loss of reputation have resulted in lakhs of rupees being imposed as penalty.

The law on gag orders (pre-publication injunctions) in cases of defamation has more or less been clarified. The Supreme Court in Rajagopal vs State of Tamil Nadu, the Delhi high court judgment in Khushwant Singh vs Maneka Gandhi and most recently the Bombay high court in Lodha Developers Ltd vs Krishnaraj Rao hold that courts cannot grant pre-publication injunctions, primarily because the appropriate remedy for defamation is compensation and not a gag order. This is because defamation is a tortious offence (i.e., between two private parties) and not a violation of a constitutional right. Therefore, one can either respond with speech countering the defamatory speech or institute a defamation suit for damages, post-publication.

However, the counter-argument is that, once such damage is made to reputation, it is often irreversible and hence such a recourse must exist. This is reflected in the judgment relied on by the trial court in Tejaswi Surya’s case, A.K. Subbaiah vs B.N. Garudachar. In this case, one sitting MLA had accused another of corruption, outside the floor of the house through a publication. The aggrieved MLA approached the civil court, praying for a similar injunction against the defendant, by showing that the defendant has further plans to make allegations of corruption publicly which would cause irreparable damage to the reputation of the plaintiff. The civil court granted the injunction, which was confirmed by the Karnataka high court.

Note that in this case, the claim for injunction is based on the sexual harassment allegation. Yet the gag order broadly restrains any speech defaming the plaintiff (in this instance Tejaswi Surya). Further, note that it is not the case that all or any of the defendants have carried such or a similar piece that has the possibility to lower the reputation, yet they are made defendants, as they are just generally understood to be the “media”.

Despite all of the ambiguity above, the judges in the high court during the hearing were keen on understanding how the trial court order cause a ‘chilling effect’, if it is simply and oddly reiterating the law?

Yet, the order did induce fear in the media, demonstrated by the fact that none of the 49 defendants challenged the order, many of whom are national news establishments. Furthermore, the fact that the ‘gag order’ existed in addition to the defamation law makes one think twice before publishing any material related to the plaintiff.

The order, with its ambiguity and broadness, causes fear about what exactly can be spoken about and what cannot. The dilemma then pushes people towards self-censorship. This was precisely the issue in Shreya Singhal vs Union of India, wherein words such as “grossly offensive”, “annoyance” and “inconvenience” were struck down as broad, vague and with a propensity to chill (stifle) free speech.

Words such as “grossly offensive”, “annoyance” and “inconvenience” were struck down as broad, vague and with a propensity to chill (stifle) free speech. Representative image. Credit: Wikimedia Commons.

Article 329-B: Election Commission as the appropriate authority

Article 329-B of the Constitution holds that no election to either house of parliament or to either house of the state legislature shall be called in question except by an election petition to the EC. Through cases such as N.P. Ponnuswami and Union of India vs Association of Democratic Reforms (Supra) the applicability of the Article has been enlarged. By giving a wide interpretation of the term “election”; as the entire process which consists of several stages and consisting of many steps, starting from when elections are notified to the announcing of results. In other words, the jurisdiction of the EC is to be wide enough to include all processes necessary for the smooth conduct of election.

These processes such as rallies, speeches, processions, criticisms of rival candidates are all part of the model code of conduct (MCC) and have an important bearing on the election results. Therefore, the argument by ADR, in this case, was that the gag order has to be seen in the context of elections. Stifling the debate about a candidate just when elections are around the corner not only makes it an uneven plain for rival candidates, but primarily makes it an election dispute. The high court concurred with this argument, which is then reflected in last paragraph of its order.

Also Read: We Need an Anti-SLAPP Law To Encourage and Protect Free Press

Article 329-B is gaining relevance, especially in context of rival candidates launching virulent verbal attacks at each other. For example, recently, Gautam Gambhir (the BJP candidate for East Delhi constituency) was accused of circulating pamphlets with misogynistic and casteist remarks against his rival candidate Atishi of Aam Aadmi Party. Gautam Gambhir responded with a legal notice to cease and desist from making such accusations, failing which he would approach the court for a claim of defamation. However, if an expansive reading of Article 329 -B is favored, as done in Tejaswi Surya’s case, it would then bar courts from entertaining such a claim till the election results are announced.

Such use of defamation law by powerful persons or corporations, for both pre- and post-publication injunctions, are not a new phenomenon. Infamously called SLAPP suits (Strategic Litigation Against Public Participation), for instance, Reliance used this strategy against Paranjoy Guha Thakurta’s Book Gas Wars, which spoke about the influence wielded by Reliance on the nation’s gas pricing. Now, we see another kind of SLAPP litigation emerging, wherein candidates are illegitimately using or threatening to use the courts to stifle criticism. Tejaswi Surya’s case is a prime example of that.

Mohammed Afeef is a practicing lawyer at the Alternative Law Forum.