With Justice Pinaki Chandra Ghose, one of the seven judges who heard the Karnan case, having since retired and thus not able to sign the judgement, its legality could be challenged. 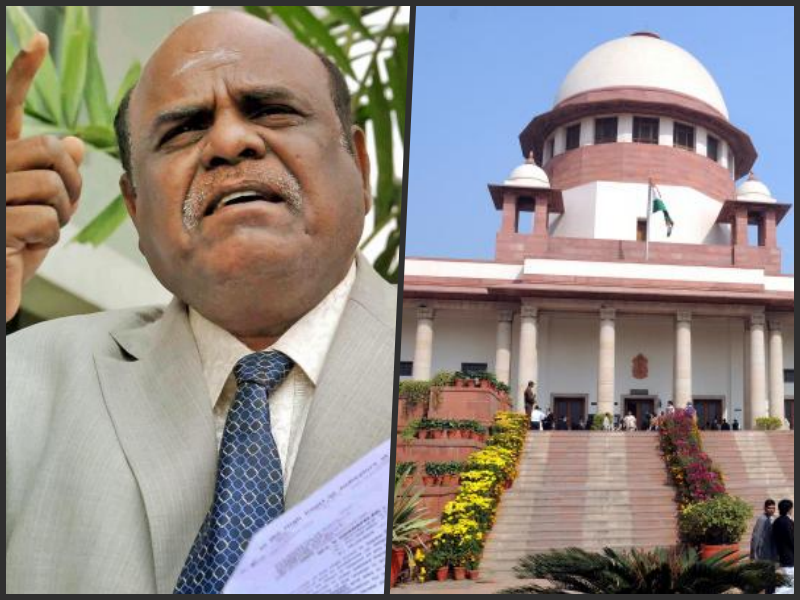 With the court reopening on July 3, a reasoned judgement on Justice Karnan’s conviction and sentence is expected to be delivered shortly. Credit: PTI

New Delhi: Justice C.S. Karnan, presently lodged in the Presidency Correctional Home in Kolkata, was found guilty of contempt of court and sentenced to six-month imprisonment by a Supreme Court bench on May 9. The bench comprising seven judges gave the judgement through a non-reasoned order before it broke for summer vacation, saying a detailed order would follow.

With the court reopening on July 3, a reasoned judgement on Justice Karnan’s conviction and sentence is expected to be delivered shortly. Even as the judgement is awaited, a huge question mark hangs over its legitimacy as Justice Pinaki Chandra Ghose, one of the seven judges who delivered the order on May 9, retired on May 27 and will not be signing the judgement.

Does it make any difference whether the judgement is signed by six or seven judges, as long as it explains the reasons for the order of conviction and sentence unanimously passed against Justice Karnan on May 9? This is an unprecedented situation that may have an impact on the validity of the judgement itself.

It can be argued, for instance, that jurisdictionally, it is not a seven-judge bench case. The chief justice of India (CJI), Justice J.S. Khehar, had constituted it because of the crucial question it raised – whether a sitting judge of the high court, who is removable from office only by parliament as per the constitution, could be punished for contempt of court.

As there was no previous ruling by a five-judge bench on the issue, which required reconsideration, the CJI was not required to constitute a seven-judge bench in terms of the rules of the court for hearing a suo motu contempt case. Yet, he constituted it by choosing the seven senior-most judges of the Supreme Court, underscoring the importance he attached to it. It is another matter, however, that the bench heard no arguments on the constitutional issue of whether a sitting judge could be punished for contempt of court, and confined itself wholly to Justice Karnan’s defiance of its orders.

Having done so, it could be asked whether the seriousness attached to the case could be diluted by compromising with one of the essential tests of legitimacy of a judgement – that all the judges who heard it must take part in its pronouncement by signing it on the date of delivery.

The Supreme Court’s judgement in Surendra Singh and Others v The State of Uttar Pradesh delivered on November 16, 1953, by justices Vivian Bose, B.K. Mukherjea and N.H. Bhagwati is the most relevant judgement on the subject.

Authored by Justice Bose, it dealt with an interesting case involving a judgement and was signed by two judges of the Lucknow bench of the Allahabad high court, one of whom died before it was delivered. The division bench of the high court of Justices Kidwai and Bhargava heard the appeal of the three death row convicts against the trial court’s conviction and death sentence. Jurisdictionally, the case ought to be heard by a bench of two judges, as per the high court rules. Having heard it, the bench reserved the judgement.

Before it could be delivered, Justice Bhargava was transferred to Allahabad. There, he authored the judgement, signed it and sent it to Justice Kidwai in Lucknow, without having dated it. Justice Bhargava died on December 24, 1952, before the judgement could be delivered. Justice Kidwai then pronounced the verdict on January 5, 1953, and dated it as such. The appeal of the death row convicts was dismissed, and their death sentences were confirmed.

The convicts appealed against the high court verdict on the grounds that with the death of one of the judges, the judgement could not have been validly delivered. The Supreme Court accepted their contention and allowed the appeal, directing the high court to rehear their appeals.

The factual matrix of this case may be different from the Karnan contempt case before the Supreme Court, but the consequences are similar and the reasoning adopted by the court in 1953 appears relevant. While death of one of the judges prevented him from participating in the delivery of the judgement in 1953, in Justice Karnan’s case, the retirement of Justice Ghose will prevent him from signing and participating in the delivery of the judgement.

The Supreme Court held in the Surendra Singh case:

“Delivery of judgement is a solemn act which carries with it serious consequences for the person or persons involved. In a criminal case, it often means the difference between freedom and jail, and when there is a conviction with a sentence of imprisonment, it alters the status of a prisoner from an undertrial to that of a convict; also, the term of his sentence starts from the moment judgement is delivered.”

The Supreme Court made it clear that up to the moment the judgement is delivered, judges have the right to change their mind. It observed that there is a sort of locus poenitentiae, and indeed last minute alterations sometimes do occur. The court continued:

“It follows that the judge who “delivers” the judgement, or causes it to be delivered by a brother judge, must be in existence as a member of the court at the moment of delivery so that he can, if necessary, stop delivery and say that he has changed his mind. There is no need for him to be physically present in court but he must be in existence as a member of the court and be in a position to stop delivery and effect an alteration should there be any last minute change of mind on his part…. But one cannot assume that he would not have changed his mind if he is no longer in a position to do so. A judge’s responsibility is heavy and when a man’s life and liberty hang upon his decision nothing can be left to chance or doubt or conjecture; also, a question of public policy is involved.”

The Supreme Court in this case relied on a judgement delivered in 1867 by the full bench of the Calcutta high court – consisting nine judges – in Mahomed Akil v Asadunnissa Bibee. In that case, three of the seven judges who constituted the bench handed in signed judgements to the registrar of the court. Before the judgement could be delivered, two of them retired and one died. A full bench of nine judges was then convened to consider whether the drafts of those three judges could be accepted as judgements of the court. All nine judges were unanimous in holding that those three opinions could not be regarded as judgements in the formal sense of the term.

It could be suggested that had Justice Ghose not retired, he could have changed his view on conviction and sentence of Justice Karnan, and in the event of an even split among the remaining six judges, his dissent would have been decisive in tilting the scales of justice either way. Or that Justice Ghose, by his draft judgement circulated to the remaining six, could have persuaded them to adopt his view on Justice Karnan’s conviction and sentence.

His joining the other six judges on May 9, while passing of the non-reasoned order sending Justice Karnan to jail, was an interim measure till the delivery of the reasoned judgement – in which the same judges are free to adopt a different view if they find merit in it.

Keeping Justice Ghose’s retirement on May 27 in mind, the CJI Khehar could have constituted a five-judge bench to hear the Karnan case. Justice Ghose, being sixth in seniority, would then have been out of the bench in the beginning itself. Not having anticipated how long the case could take to culminate, Chief Justice Khehar included Justice Ghose while constituting the bench.

Justice Karnan may well see this flaw as an opportunity to challenge the legality of the judgement, which could only be signed and pronounced by six of the seven judges who heard him.

Retrospective dating of the reasoned judgement

To avoid this problem, could the judgement be dated as May 9, when a non-reasoned order was pronounced in the court sentencing Justice Karnan to imprisonment? In a recent case, Suraz India Trust v Union of India, involving a frivolous public interest litigant, the bench comprising CJI Khehar and Justices D.Y. Chandrachud and Sanjay Kishan Kaul imposed Rs 25 lakhs as costs on the petitioner, directing him to deposit the amount with the Supreme Court Advocates on Record Welfare Trust within three months from May 1 – when the case was heard for three hours. The trust was also barred from filing any public interest plea in any court in the future.

But the reasoned judgement in this case, dated May 1, was uploaded on the Supreme Court’s new website only on June 22. The bench could simply have reserved the judgement on May 1 rather than imposing costs on the litigant in haste, so that a judgement, retrospectively dated, was not subsequently made available on its website.

Whether the judges could have signed on May 1 imposing punitive costs on the petitioner, when the reasoned judgement was not ready, raises a relevant question. On May 1, the bench simply passed an oral order, imposing costs on the trust.

In the case of Justice Karnan, retrospective dating of the reasoned judgement does not appear to be an option because Justice Ghose could not have signed it on May 9, let alone apply his mind to it, as it was not ready on that date.

Unless set aside, a judgement delivered by three judges will continue to bind even a bench of seven Judges. Surendra Singh was cited as a valid precedent by a three-judge bench of the Supreme Court in Kushalbhai Ratanbhai Rohit v State of Gujarat on May 6, 2014. The bench underlined the principle that one cannot assume that the judge would not have changed his mind before the judgement becomes final. Among the three judges was Justice J.Chelameswar, who is also on the bench of seven judges that sentenced Justice Karnan.