The court had earlier given a warning to transfer the case from the local court if there was a "slightest possibility" of lack of fair trial. 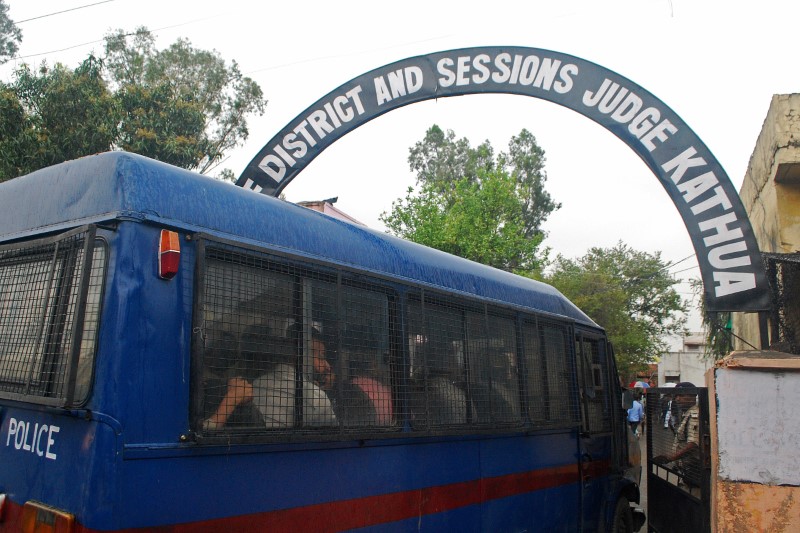 A police vehicle transports the accused men in connection with the rape and murder of an eight-year-old girl, to a court in Kathua, south of Jammu, April 16, 2018. Credit: Reuters/Stringer

New Delhi: The Supreme Court on Monday vacated the stay on trial of the Kathua gang rape and murder case and transferred it outside Jammu and Kashmir to Pathankot in Punjab.

A bench headed by Chief Justice Dipak Misra directed that the trial should be held in-camera, fast-tracked and conducted on a day-to-day basis to avoid any delay. The apex court also said that the trial would be carried out in accordance with the provisions of Ranbir Penal Code, which is applicable in Jammu and Kashmir. It added that the trial must be fair to the victim’s family as well as the accused.

The top court also ordered continuation of security to the family members of the victim, family friends and lawyer representing them and directed translation of statements and records of the case from Urdu to English. “The security provided to the juvenile accused will continue,” a bench, which also comprised Justices D.Y. Chandrachud and Indu Malhotra, added and posted the matter for further hearing in July when the apex court reopens after the summer vacation.

The victim, an eight-year-old girl from a minority nomadic community, had disappeared from near her home in a village close to Kathua in the Jammu region on January 10. Her body was found in the same area a week later.

The girl’s father had moved the SC earlier, apprehending threat to the family, their friend and their lawyer Deepika Singh Rajawat. A separate plea was also filed by two accused seeking that the trial in the case be held in Jammu and the probe handed over to the CBI.

The bench made it clear that Monday’s hearing was confined to the issue of shifting the trial of the case out of Jammu and Kashmir. The apex court had earlier given a stern warning and had said it would transfer the Kathua gangrape-and-murder case from the local court in the “slightest possibility” of lack of fair trial, stating that the “real concern” was to hold proper prosecution.