What the Supreme Court Said While Convicting Sasikala

The court also commented on the role played by Jayalalithaa in the conspiracy to amass wealth and strongly indicted her. 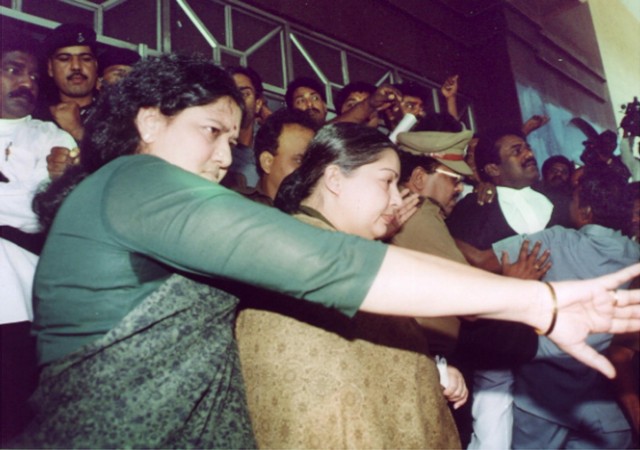 New Delhi: The Supreme Court on Tuesday put an end to the political calculations of AIADMK general secretary V.K. Sasikala, convicting her in the Rs 66 crore disproportionate assets case. In view of the conviction, she is disqualified from contesting elections for a total period of ten years.

Awarding a four year sentence to Sasikala, V.N. Sudhakaran and J. Ilavarasi, the court asked them to surrender before a special court in Bengaluru. The bench of Justices Pinaki Chandra Ghose and Amitav Roy set aside the Karnataka high court judgment of May 2015 acquitting the main accused, former chief minister J. Jayalalithaa, Sasikala, Sudhakaran and Ilavarasi and clearing them of all charges.

The bench faulted the high court for arriving at the percentage of disproportionate assets as 8.12% and said it is based on a completely wrong reading of the evidence on record, compounded by incorrect arithmetical calculations by treating Rs 24-crore worth of loans as income. The court commented on the role played by Jayalalithaa in the conspiracy to amass wealth disproportionate to known sources of income and strongly indicted her.

The bench, while stating that the charges against Jayalalithaa had come to an end after her death, however, said this case demonstrates a “deep-rooted conspiratorial design” to amass vast riches and hold them through shell entities. It accused Jayalalithaa and her three co-accused, including V.K. Sasikala, of hatching one criminal conspiracy after another at Poes Garden to launder the ill-gotten wealth of Jayalalithaa for purchasing huge properties in the names of “masked fronts.”

It said Jayalalithaa did not accommodate Sasikala at Poes Garden out of some “philanthropic urge” but with cold-blooded calculation to keep herself secure from any legal complications, which may arise from their criminal activities. It accused Jayalalithaa of misusing her public office, masking “banking exchanges”, acquiring “vast tracts of land” for very small amounts of money and conspiring with her co-accused at Poes Garden only to later “feign ignorance” about any crime committed.

It pointed out how ten companies were registered on one day at the Poes Garden residence. Holding that all four accused were guilty of criminal conspiracy, it said that Jayalalithaa had executed a general power of attorney in favour of Sasikala on Jaya Publications. This was done, the court said, for Jayalalithaa to maintain a respectable distance from the inflow and outflow of money meant for property acquisitions.

The court said Jayalalithaa “knew fully well that Sasikala would be dealing with her funds credited to her account in Jaya Publications”. The court pointed out that the next proof of conspiracy was the speed and manner in which firms were created by the accused persons. The court concluded that these shell entities were mere extensions of Namadhu MGR and Jaya Publications, and they owed their existence to Jayalalithaa and Sasikala. All the business they did was buy property for less than market value. Most of the sale deeds were executed by officials who came to Poes Garden to register the properties.

The bench directed Sasikala and the two others to surrender before the Bengaluru special court to serve out the remaining period of sentence in prison. The court said since Jayalalithaa had died on December 5, 2016, the appeals filed by the Karnataka government in so far as she is concerned had come to an end. While upholding the directions of the trial court to confiscate the properties, the bench said this should be treated as an order of the apex court.

Writing the main 570-page judgment, Ghose said it has been proved beyond reasonable doubt that the accused A1 to A4 have entered into a conspiracy and had come into possession of assets disproportionate to known sources of income of Jayalalithaa during 1991 to 1996.

Agreeing with the findings of the trial court that the disproportionate assets was to the tune of Rs 53.60 crores, the bench said the assets were dispersed in the names of Sasikala and the two others, and the firms and companies involved, to hold on behalf of Jayalalithaa.

Coming down heavily on Sasikala and two others, the bench said the fact that A2 to A4 did combine to constitute the firms to acquire huge tracts of land out of the funds provided by Jayalalithaa was also a clear index that their assemblage in the house of Jayalalithaa was not engendered by any philanthropic urge for friends. They were residing with Jayalaithaa without any blood relation between them to frame and further the criminal conspiracy to hold the assets of the former chief minister.

Throughout the hearing in the apex court, Jayalalithaa and the three others took a gamble by arguing against the trial court verdict, saying that the evidence adduced was not properly appreciated by the trial court. No attempt was made by the counsel seeking to sustain the high court judgment of acquittal.

The bench pointed out that 1991, the assets of the accused were valued at Rs 2.01 crore. By 1996, the accused were worth a whopping Rs 66.44 crore. It agreed with the findings of the trial court that the accused had amassed Rs 53.60 crore as disproportionate assets to known sources of income and failed to account for the same.

It said the attendant facts and circumstances encountered in this case demonstrate a “deep-rooted conspiratorial design to amass vast assets without any compunction and hold the same through shell entities to cover up the sinister trail of such illicit acquisitions and deceived and delude the process of law”.

Explaining the conspiracy, the bench said the unimpeded, frequent and spontaneous inflow of funds from the account of Jayalalithaa to those of the other co-accused and the firms/companies involved overwhelmingly demonstrated their collective culpable involvement in the transactions.

On the contention that they had filed income tax returns that were accepted and that there was no suppression of income, the bench said that mere declaration of property in the income tax returns does not ipso facto connote that the same had been acquired from known lawful sources of income.

It said the prosecution could successfully establish that Sasikala and the others had no independent or real source of income and that it was the finance of A1 that was really in circulation. Thus it could prove beyond reasonable doubt that the only source of money the acquisition of large assets was that of hers. The bench rejected the charge that there was unfairness in investigation and trial. It said this cannot be sustained in the overall factual conspectus.

Roy, who delivered a separate judgment in the case, deprecated the prevalence of corruption in society, particularly among public servants.

He said a growing impression in contemporary existence seems to acknowledge the “all-pervading pestilent presence of corruption almost in every walk of life, as if to rest reconciled to the octopoid stranglehold of this malaise with helpless awe”. He said corruption is a “vice of insatiable avarice for self aggrandizement by the unscrupulous, taking unfair advantage of their power and authority. Those in public office also breach the institutional norms, mostly backed by minatory loyalists.”

Expressing his anguish, Roy said both the corrupt and the corrupter are indictable and answerable to the society and the country as a whole. “This pernicious menace stemming from moral debasement of the culpables, apart from destroying the sinews of the nation’s structural and moral set-up, forges an unfair advantage of the dishonest over the principled, widening as well the divide between the haves and have nots.”

He said this has a demoralising bearing on those who are ethical, honest, upright and enterprising. “This virulent affliction triggers an imbalance in the society’s existential stratas and stalls constructive progress in the overall well-being of the nation, besides disrupting its dynamics of fiscal governance. It encourages defiance of the rule of law and the propensities for easy materialistic harvests, whereby the society’s soul stands defiled, devalued and denigrated,” he said.

The judge called for a collective, committed and courageous turnaround to free the civil order from the suffocative throttle of this deadly affliction. He said every citizen has to be a partner in this sacrosanct mission, “if we aspire for a stable, just and ideal social order as envisioned by our forefathers and fondly cherished by the numerous self-effacing crusaders of a free and independent Bharat, pledging their countless sacrifices and selfless commitments for such cause.”