Supreme Court Agrees to Allow Rath Yatra, But Only at Puri and With Restrictions

The CJI-led bench said the court cannot "micro-manage" the rituals and left it to the state government, the Centre and the temple management. 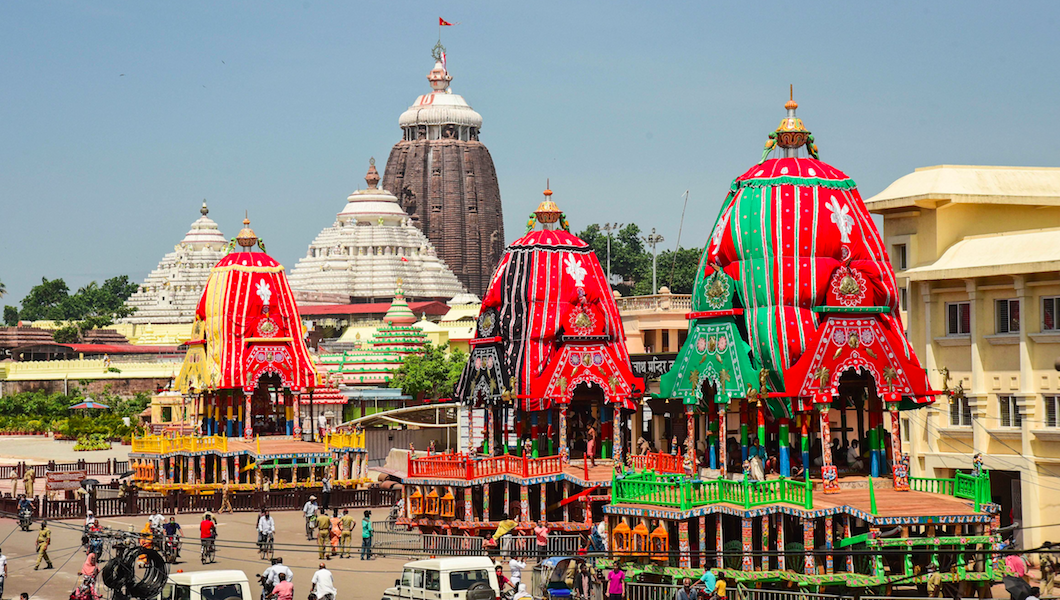 Chariots are seen ahead of the annual Ratha Yatra procession, in Puri, Monday, June 22, 2020. Photo: PTI

New Delhi: Four days after staying the historic Lord Jagannath Rath Yatra at Puri, the Supreme Court Monday indicated it would allow the event, which is scheduled to start tomorrow, saying the court cannot “micro-manage” the rituals and left it to the state government, the Centre and the temple management to deal with that issue.

A bench headed by Chief Justice S.A. Bobde was informed by the Odisha government that it will coordinate with the temple management and the Centre to make things smooth during Rath Yatra, which is attended by lakhs to people from around the world, and ensure compliance with health guidelines in view of the coronavirus (COVID-19) pandemic.

While hearing a PIL filed by NGO ‘Odisha Vikash Parishad’ the apex court on June 18 had said that in the interest of public health and safety of citizens, this year’s Puri Rath Yatra cannot be allowed and that “Lord Jagannath won’t forgive us if we allow” it.

A day after the order was passed, some applications were filed in the top court seeking recall and modification of its order.

These applications, including those filed by ‘Jagannath Sanskruti Jana Jagarana Manch’ and BJP leader Sambit Patra, urged the court to allow the Rath Yatra with certain restrictions due to the pandemic.

The bench, also comprising Justices Dinesh Maheswari and A S Bopanna, was informed by the Centre that Rath Yatra can be conducted without compromising on citizen’s health and with co-operation of state and temple trust.

The bench, whose order is yet to be uploaded on the apex court website, amply indicated during the hearing that it will allow the Rath Yatra by leaving the micro-management to the wisdom of the Centre, the state and temple trust.

The top court said that it is considering the issue of conducting Rath Yatra in Puri only and not at other places in Odisha.

CJI Bobde, who presided over the hearing through video conferencing from his Nagpur residence, said that the order will be made public after some time.

During the hearing, the Solicitor General Tushar Mehta, appearing for the Centre said that without compromising on the health of the people and with the cooperation of the temple trust, the Rath Yatra can be conducted.

He said the procession can be confined without hurting the religious sentiments of the people and the Centre can consult with Puri’s Shankaracharya.

The bench said it is not concerned with whom the Centre is talking to and does not see a point in the deliberations.

Senior advocate Harish Salve, appearing for the Odisha government said that the Yatra or the procession will not be conducted in the entire state.

The bench said that it is only considering holding of the Yatra in Puri and not anywhere else in Odisha.

The top court said the when temple committee and the trust are responsible for conducting the Rath Yatra, then why Shankaracharya is involved.

Mehta said that it is done only for the consultation purpose.

Salve said the chariot can be pulled by ‘shebaits‘ or police personnel who have tested negative for COVID-19.

Senior advocate Ranjit Kumar, appearing for Odisha-based NGO, which filed the PIL for the cancellation and deferment of the annual festival, said that if the Rath Yatra is permitted by the court then minimum number of people of the temple should be allowed to participate in the ritual.

The bench said the court is not going to micro-manage the Rath Yatra and it will leave it to the wisdom of the Centre, the state and the temple trust for conducting the rituals.

Salve added that they would coordinate between the Centre and the temple committee and ensure that the health guidelines are followed and things go smoothly.

While the Rath Yatra festival, held over 10-12 days with lakhs of people participating, was scheduled for June 23, the ‘Bahuda Jatra’ (return car festival) was fixed for July 1.

Three heavily-built wooden chariots of Lord Jagannath, Lord Balabhadra and Devi Subhadra are traditionally pulled by thousands of devotees over a distance of three kilometres twice during the nine-day festival of the Trinity at Puri.

The application filed by ‘Jagannath Sanskruti Jana Jagarana Manch’ has sought modification of the June 18 order, saying the festival is deeply associated with the religious beliefs of millions of devotees of Lord Jagannath and it is “not impossible and impracticable” for the state and district administration to conduct the Yatra by maintaining social distancing and following the Centre’s guidelines.

Besides this, a separate application seeking modification of the June 18 order has been filed by one Aftab Hossen, who has said that “as per the ritual of Lord Jagannath, the Rath Yatra is performed every year and if one year it is not performed, same cannot be performed for the next 12 years”.

Hossen, while urging the apex court to modify its order and allow the Rath Yatra, has said in his application that restraining the Rath Yatra this year would practically mean restraining it for the next 12 years and this could create “great repercussion and chaos” in the Lord Jagannath culture and rituals.

In its separate application, the ‘Jagannath Sanskruti Jana Jagarana Manch’ has said that as per the earlier direction of the Orissa High Court as well as decision of the state government, 372 people were engaged in the construction of three raths/chariots for more than one-and-half months and all were isolated, tested and found COVID-19 negative.