The matter has been set for Wednesday morning since the lawyer, Utsav Bains, was not present in court on Tuesday.

New Delhi: The Supreme Court is set to continue the suo motu proceedings it initiated after allegations of sexual harassment against Chief Justice of India Ranjan Gogoi were reported in the media.

But like its hearing on Saturday, the special bench is still not going to consider the merits of what the woman – a former junior court assistant – who alleged harassment actually narrated in the affidavit she sent to 22 sitting judges on the apex court.

Instead, according to the Supreme Court causelist for Tuesday, the bench was to take up at 10:30 am an affidavit filed by advocate Utsav Bains, in which he has alleged that a ‘fixer’ tried to bribe him to organise a press conference on the matter and frame the chief justice. Bains also says he fears he may be killed with an “untraceable poison” because the underworld don Dawood Ibrahim and Jet Airways founder Naresh Goyal are part of those apparently trying to frame CJI Gogoi.

When the hearing began on Tuesday, the court asked for Bains, who was absent. The court has now issued notice to Bains requiring his personal presence, and asked him to present certain material he has mentioned in his affidavit. The matter has now been listed for 10:30 am on Wednesday.

Tuesday’s matter was listed before Justices Arun Mishra, R.F. Nariman and Deepak Gupta – unlike the previous emergency hearing, which was presided over by the chief justice himself. 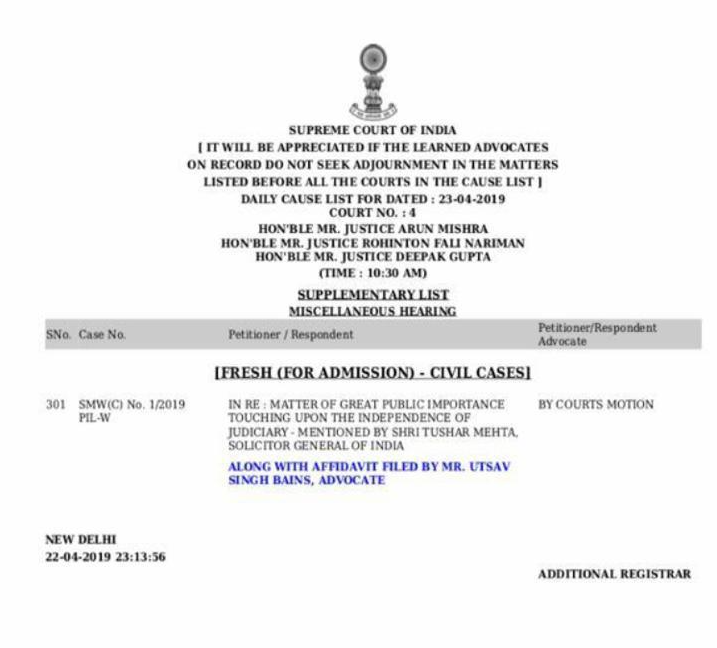 Bains’s affidavit, which makes several allegations against people who would appear to have no connection to the sexual harassment allegations, claims that a certain “high-profile corporate figure” tried to get a favourable judgment from CJI Gogoi. When he failed, he decided to “frame the Hon’ble Chief Justice of India in a false case of sexual harassment to pressurise him to resign” using a fixer named Romesh Sharma, who runs a “cash for judgments” business.

“…the Deponent is privy to certain events involving the said corporate figure and will submit in a sealed cover the events and list of the involved persons to this Hon’ble Court should it so direct him,” Bains has said.

The affidavit then goes on to involve Jet Airways founder-chairman Naresh Goyal and link him with mobster Dawood Ibrahim, who figures in the UN’s list of terrorists, based on information from an unnamed source. “…the source showed the Deponent credible and incriminating reports by Indian Intelligence agencies proving that Dawood Ibrahim had invested money in Jet Airways and that the Delhi based Romesh Sharma was a close aide of Dawood Ibrahim. …the Deponent further enquired into the claims and found the story to be true and secret documents of Intelligence agencies in custody of some Delhi-based journalists, which clearly establish that Dawood Ibrahim had invested huge sum of money in the Jet Airways,” the affidavit reads.

The advocate has also said that he knows that his life will come under “imminent danger” because he has revealed the connections between Romesh Sharma, Naresh Goyal and Dawood Ibrahim, and that he will likely be killed. “…the Deponent has been informed that he might be killed in a planned road accident or poisoned by untraceable poison or killed in a way that the murder will look like a plain accident or be framed in a false case of Rape etcetera to tarnish his image by those who will be hurt by the Deponent for speaking the truth and exposing them,” Bains has said.

According to him, he has taken his information, which he has “tried to the best of his ability to verify”, directly to the Supreme Court and not to an investigative agency because it “cannot be probed by any subordinate agency without direct judicial supervision since it concerns the independence of the Judiciary and directly relates to a conspiracy to undermine the topmost office in the Indian judiciary”.

The Supreme Court’s actions ever since the allegations of sexual harassment first surfaced have been questioned by a number of people. In court, CJI Gogoi too claimed that the allegations were part of a “bigger plot” to “deactivate him”.

The manner is which the proceedings were conducted have been seriously questioned by several lawyers, including the Women in Criminal Law Association.

Most recently, a number of social activists and academics have demanded an independent probe into the sexual harassment and criticised the CJI’s handling of the allegations. “We…call upon all the judges of the Supreme Court to ensure that an independent and credible inquiry committee comprising senior retired judges and eminent members of civil society, headed by a woman, is immediately set up to inquire into this complaint,” the statement signed by Aruna Roy, Medha Patkar, Kamla Bhasin, Bezwada Wilson and others says.