UP: Houses, Shops Attacked After Clash Erupts During Durga Immersion Procession in Sultanpur

Members of the Muslim community claimed that a mosque was also vandalised, adding that the police investigation is biased.

New Delhi: A communal clash broke out on October 10 when a Durga idol immersion procession was passing from the front of a mosque in the Ibrahimpur region of Uttar Pradesh’s Sultanpur.

The people in the procession reportedly played loud music, danced with sticks and weapons in front of the Jamia Masjid as it proceeded for the immersion ceremony.

On 10th of october in Sultanpur, Uttar Pradesh, A crowd from Hindu community took out a religious procession on the occasion of Durga Puja. While passing by a mosque, the men from Muslim community asked the procession to lower the volume of the music played on loud + pic.twitter.com/Uzn8TtWyW9

According to Dainik Bhaskar, the procession was halted there for about five hours. The residents had raised an objection about the loud music, which, after a verbal fight, turned into a ruckus.

They alleged that the participants of the procession vandalised the local mosque, and homes and shops in the area. Several people were also injured during the clash.

Speaking to The Wire, Aslam* (name changed), a resident, said, “On October 10, a procession moving towards an idol immersion ceremony reached outside our local mosque – the Jamia Masjid. It was around the time of the maghrib (evening) prayers.”

“Stones were pelted at the mosque and an attempt was made to vandalise it by setting it on fire,” he alleged.

He added, “Eight to 10 shops in the same area were also attacked. All this happened despite the fact that the area is only five kilometres away from the Baldirai police station.”

Meanwhile, addressing the procession, a police officer went onto the stage and said, “Durga Mata ki is dharmik yatra mein jis kisi betey ne dussahas kiya hai, main aap se wada karta hoon, unko mitti mein mila dunga, unke ghar bulldozer se girenge. (In this religious yatra of Durga Maa, those who have dared to cause trouble will be turned to dust, and their houses will be bulldozed.)”

He went on to say, “You are not weak, neither is the administration. The administration will take strict action against those who have disrupted the procession. Please finish the idol immersion first, after which no one will be spared.”

The police officer quoted above has been identified as the sub-inspector of Baldirai, Amarendra Bahadur.

A first information report (FIR) has been registered in the case at the Baldirai police station, Sultanpur, under various sections of the Indian Penal Code (IPC), including rioting, outraging religious feelings, attempt to murder and some sections of the Public Property Act, 1984. 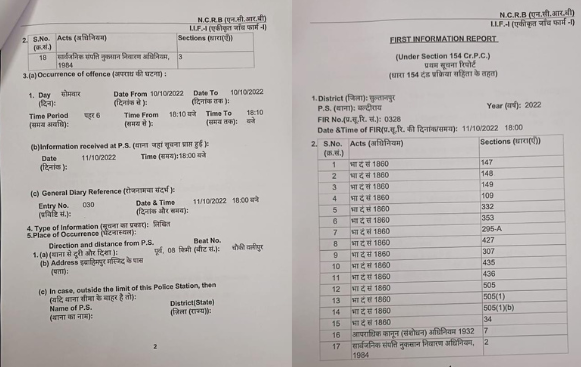 A copy of the FIR accessed by The Wire.

The FIR, seen by The Wire, has been filed against 52 persons, including one unknown person and the rest Muslims.

According to the Indian Express, 32 persons have been arrested in connection with the case.

A copy of the FIR accessed by The Wire.

The FIR was registered on the basis of a complaint by one Rakesh Kumar Ojha.

Aslam alleged, “The investigation is completely one-sided. The FIR has been registered from the side of the Hindu community participating in the procession. However, people on this [Muslim] side are too scared to even file a complaint.”

The FIR, accessed by The Wire, states that the procession was stopped and Muslims mobilised with sticks and illegal arms and stones attacked those who had come to participate in the immersion ceremony, hurting their feelings.

The FIR also names the police officer quoted above as Amarendra Bahadur, who is seen in the video. He’s the officer in charge who had registered this complaint.

The Wire reached out to the Baldirai police station circle officer, Rajaram Chaudhary, who said, “We cannot divulge the details of the investigation as of now.”

When asked about the statement Bahadur made while addressing the procession, he said: “Simply by saying so, will any bulldozer action be taken? Leaders say this on stage, what kind of a question is this?”

The officer hung up after making this statement. He refused to acknowledge the statement of Bahadur, which was recorded on camera.

The residents alleged that their homes were attacked, and some of them claimed that the participants in the procession attacked them.

Raisa*, another resident, said, “When the stone pelting ensued, my daughter and I were in the house. We escaped to another village. When I came back after two hours, I saw my house gutted in a fire. I showed my house to the police officers. My jewellery was taken away. So was my cylinder.”

Another resident Saifa* said, “They barged into our house and took away everything. Our house was vandalised. We were attacked with a lathi. The police were with the Hindu community, who were a part of the procession. They hit us and ran away. My daughter was also hit.”

Meanwhile, the residents have submitted a memorandum to the district magistrate, Ravish Gupta, urging him to take cognisance of the situation. The residents claim that no action has been taken against the said police officer in the video.

Note: All names have been changed.