Kisan Mahapanchayat, a group of farmers, had filed a petition seeking directions to the authorities to allow it to hold a satyagraha at Jantar Mantar. 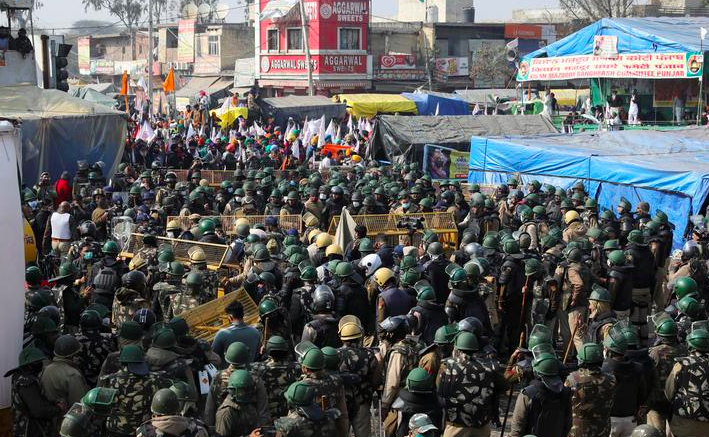 Police officers are seen at a site of the protest against farm laws at Singhu border near New Delhi, India, January 29. Photo: Reuters/Anushree Fadnavis

New Delhi: The Supreme Court on Friday came down harshly on farmers who are protesting at the borders of Delhi against the three Central farm laws, saying, “You have strangulated the entire city and now you want to come within the city and start protest again here”.

The top court made these observations while hearing a petition by a farmers’ body seeking directions to the authorities to allow it to stage a satyagraha at Jantar Mantar.

According to news agency PTI, a bench of justices A.M. Khanwilkar and C.T. Ravikumar told the counsel appearing for petitioners ‘Kisan Mahapanchayat’, a body of farmers and agriculturists, and its president that once they have approached the court against the three farm laws, they should have trust in the judicial system and let the matter be decided.

“Are you then protesting against the judiciary? Once you have approached the court, let the law take its own course… But, instead, you continue with the protests and block the national highways… You have to trust us,” said Justice Khanwilkar, according to The Hindu.

The apex court said citizens have equal rights to move freely and without fear and their properties are being damaged in the protest.

The court said, “There has to be some balanced approach.”

According to LiveLaw, the petitioner’s counsel Ajay Choudhary submitted that “Kisan Mahapanchayat” is not part of the group of protesters has been protesting at the borders. He further submitted that the roads were blocked by the police and not the farmers.

The bench, which posted the matter for hearing on October 4, asked the petitioners to file an affidavit declaring that they are not part of the protest or responsible for the blocking of the national highways at the borders of the national capital.

In a related development, another bench of the Supreme Court, led by Justice Sanjay Kishan Kaul, had on Thursday orally remarked that highways cannot be blocked perpetually and that redressal of grievances should be sought through the judicial forum or parliamentary debates.

Kisan Mahapanchayat, in its petition, argued that the “patently discriminatory, arbitrary and unreasonable action” of the Delhi Police in preventing it from holding peaceful, unarmed and non-violent satyagraha at Jantar Mantar, calling the police’s refusal a violation of basic democratic rights.

Several farmer organisations are protesting against the passage of three laws – the Farmers Produce Trade and Commerce (Promotion and Facilitation) Act, 2020, the Essential Commodities (Amendment) Act, 2020 and the Farmers (Empowerment and Protection) Agreement on Price Assurance and Farm Services Act, 2020.

Initially, the protests started from Punjab in November last year and later spread mainly to Delhi, Haryana, and Uttar Pradesh.