In State-Level Changes to Land Laws, a Return to Land Grabbing in Development's Name

The new state laws, which are in line with the BJP’s land ordinance, undo consent procedures and legitimise land acquisition with terms favourable to investors.

The Land Acquisition, Rehabilitation and Resettlement Act is a means of generating some degree of consensus among landholders to part with their land. Representative image. Credit: Amit Dave/Reuters

One of independent India’s landmark legal reforms has failed. The Right to Fair Compensation and Transparency in Land Acquisition, Rehabilitation and Resettlement Act, (LARR) 2013, which replaced the colonial legislation of 1894, was one of the biggest reforms in the arena of land governance. But following the failure of the BJP government’s efforts to amend it through its land ordinances issued after 2014, six states have used constitutional provisions to make new laws. Other states have developed rules under the Act to dilute the rights of landowners and land dependent people in the face of land acquisition.

The major reason to undo this law is that it comes in the way of providing land cheaply and quickly to investors. The LARR will go down in history as the law that was brought in by social movements and dismantled by the country’s democratically elected leaders in favour of investors.

Gujarat, Rajasthan, Maharashtra, Jharkhand and Telangana have enacted new laws using Article 254(2) of the constitution by seeking presidential assent. Barring Telangana, all are BJP-ruled states. Their laws replicate or reflect the key amendments proposed in the 2014 ordinance. Gujarat and Telangana exempt a long list of projects from social impact assessment (SIA) and mandatory consent of landowners. These include projects of national security, defence, rural infrastructure, affordable housing, industrial corridors and other infrastructural projects, including projects under public-private partnerships (PPPs). In Maharashtra, PPP projects have been fully exempted from the SIA and consent clauses.

SIA and consent were considered two progressive pillars of the 2013 law necessary to uphold democratic decision-making. Seeking consent of 70% (for PPP) and 80% (for private projects) of the landowners before acquiring their land was included in the law to address the serious injustice in the earlier practice where the state could take away an individual’s home, farm or occupational right by merely issuing a notice. SIA is the only mechanism today to address the impacts of acquisition on the livelihoods of all those who don’t own land but are dependent on it. This is a pre-requisite to formulate inclusive rehabilitation packages. The SIA, coupled with public hearings at the gram sabha, was to ensure that all affected people would have a right to compensation and rehabilitation.

Several state level rules have diluted the central act. Telangana, Uttar Pradesh and Andhra Pradesh have all reduced the notice period for public hearings under SIA from three weeks to one week. In Jharkhand, for instance, the quorum for seeking consent from the gram sabha has been reduced from half to one-third.

States have also reduced compensations. The 2013 law had a differential multiplying factor for calculating compensation in rural and urban areas. This was brought in as a mechanism to fix the deficiency in market rates while computing compensation amounts. According to the central Act, the market value is to be multiplied by a fixed number (one in urban areas and two in rural areas) and then a solatium is to be imposed on the value that is arrived at. Haryana, Chhattisgarh and Tripura have reduced the multiplying factor in rural areas from two to one, thereby reducing the amount of compensation that will be received.

The central law had specific provisions for returning unused land to the original owners. However, state governments are trying hard not to return unused land to the farmers by using land banks or using them for other public purpose. States laws of Odisha and Jharkhand allow only for the reversal of unused land to land banks. In Tamil Nadu, the district collector can assess the reallocation of the unused land for any other use with no specified time frame. Thereafter it is to stay in a land bank.

Whose law is it?

Though the LARR was passed during the UPA rule, it can hardly be called a victory of the parliament or the Congress. MPs political parties of an independent country let a colonial law dominate for decades. The use of its clauses for state-led projects such as dams and mines immiserated millions of poor rural households in the name of development while politicians announced these grave injustices as the sacrifice of the poor or the cost that had to be borne for the greater good of the country.

After years of intense public pressure, surrounded by long and intractable conflicts and litigation and as development projects came to a grinding halt, the parliament finally passed this law. It became clear that despite all the hype about industrialisation and development that has gone on in Indian politics, land mattered to people. Most parties agreed to pass the law because opposing such a populist move in a country where majority of the population still depended on land would be politically risky. 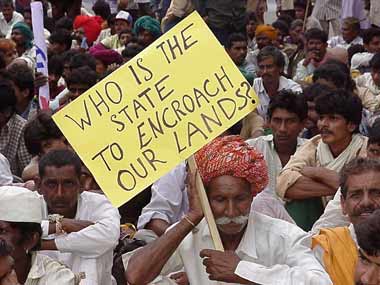 Immediately on forming the new government, the BJP tried to introduce amendments to the law through a series of land ordinances. While the Congress and its allies opposed these changes in parliament, large farmer organisations including the Rashtriya Swayamsevak Sangh affiliated Bharatiya Kisan Sangh took to the streets in large numbers to resist the ordinances. The ordinances was allowed to lapse and PM Modi suggested that the states could make their own rules.

A joint parliamentary committee (JPC) was also set up with members from major political parties to look into the proposed amendments. While many groups made several depositions to the JPC regarding the LARR and the ordinance, this committee is yet to deliver any conclusion. This feet dragging by the JPC is understandable. The committee is in a bind; concluding in favour of the ordinance would re-ingnite protests against the BJP and a decision against it would show the government’s so-called reform agenda in poor light.

Even as the JPC’s findings are awaited, states have exercised constitutional provisions and diluted the progressive clauses of the LARR and adopted the clauses in the ordinance. This makes the JPC process appear like eyewash, distracting attention from the legal changes at the state level.

Post independence, the Indian government used the narrative of development to justify land acquisition. Lands were taken from private individuals and put to use by state projects to generate revenue, employment and goods. But since the 1990s, when the state effectively withdrew from such economic projects and allowed private, profit-making companies to build projects, the moral justification for land acquisition could not be sustained.

Land grabbing is the term that has been used to describe land acquisition post the 1990s as the appetite for land speculation among investors grew and acquisitions acquired a more brutal character with the state using its police machinery to quell any efforts of farmers to protect their lands. Seen in this light, the LARR is a means of generating some degree of consensus among landholders to part with their land. But the Act is hardly only all good clauses. It included in the problematic phrase “public purpose” even private projects designed and implemented to generate corporate profits.

The new state laws that are in line with the BJP’s land ordinance undo consent procedures and legitimise land acquisition with terms favourable to investors. They envisage a systematic and legalised redistribution of land away from the poor. The state rules that dilute the procedures for identifying the potential impacts of land acquisition, benefits to oustees and the return of unused land will unleash more conflicts on the ground.

In such times when governments work for investors and subvert democracy, refusing to part with one’s land is a revolutionary act.

Manju Menon, Kanchi Kohli and Debayan Gupta are with the Centre for Policy Research-Namati Environmental Justice Program. The article is based on their latest study titled ‘Mapping Dilutions in a Central Law’.