Sohrabuddin: Even When the Accused Admit to Murder, There is No Justice

In acknowledging that the investigation was killed, finance minister Arun Jaitley concedes that justice wasn't done. But his explanation for why this happened makes no sense at all. 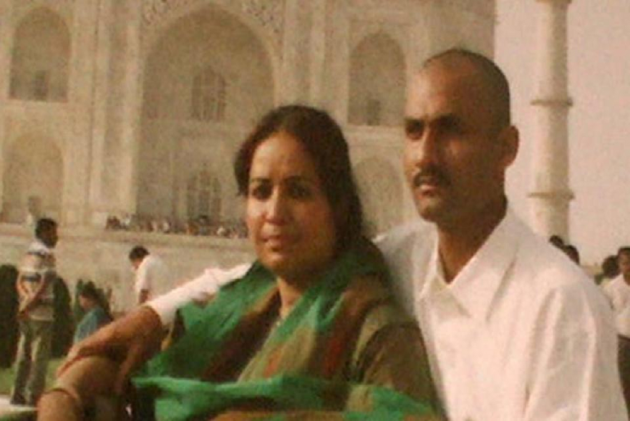 The Central Bureau of Investigation (CBI) special court judge, in a hurry to leave his mark in the law books before retiring, acquitted all the accused in the Sohrabuddin case. Moreover, he sua sponte passed remarks on facts not presented in evidence and exonerated individuals not charged before his court.

Since after all it is a court of law, one must ask the natural questions : Why? And cui bono?

At the moment it’s difficult to make out. When political mudslinging reaches its peak from both sides, the truth tends to suffer.

What is welcome, however, is lawyer turned finance minister Arun Jaitely’s Facebook Note: ‘Who killed the Investigation?’ 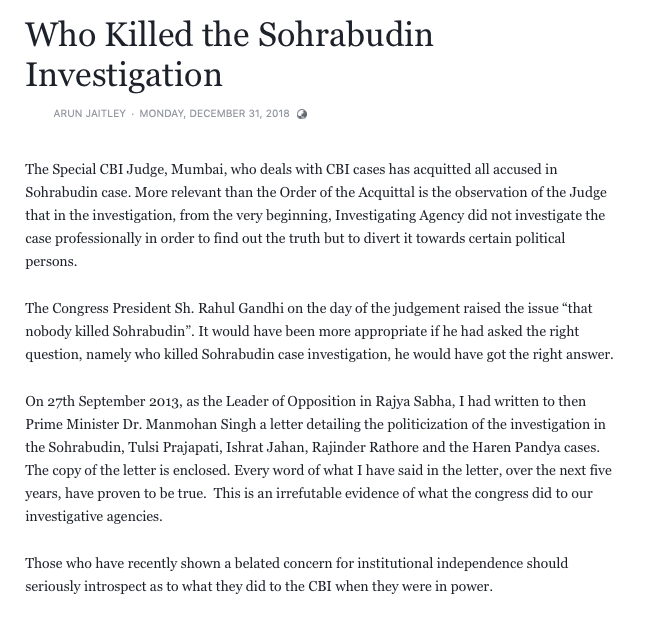 In acknowledging that the investigation was killed, the BJP minister has finally conceded that justice has not been served in the murders of Sohrabuddin, Kausar Bi, Tulsiram Prajapati, and by extension, the murder of Haren Pandya.

While one of the victim’s was allegedly a gangster and the other a former home minister, in the eyes of the law – they were both supposed to be equal. In a way, they were. Both were equally disregarded and denied justice.

In accepting that, Jaitely has brought about a rare event in the history of this 15 year old case: unanimity of opinion. The judge who acquitted everyone in a hurry, the Congress party and the BJP – all finally agree that the investigation was bungled.

The accused admits to the crime

More importantly, at least in the Sohrabuddin case, even the accused has admitted to the crime.

In a tweet to the world, D.G. Vanzara – who was ‘Accused number 1’ and DIG (ATS) at the time of the encounters – boasted a depreciated form of the Bush Doctrine he called  “our pre-emptive encounters.”

Bombay Court Judgement in #SohrabuddinCase, acquitting all 22 Police Officers has vindicated my Stand that Our Encounters were Genuine: We were wrongly framed for performing our Duties. We became Victims of Political Cross Firing between the then Occupants of Delhi & Gandhinagar.

In fact, just to be clear, there has never been any doubt that this was a fake encounter. Nearly 12 years ago in March 2007, then Gujarat Attorney General K.T.S. Tulsi told the Supreme Court that Sohrabuddin was killed in a fake encounter.

A month later, he told the court that Kausar Bi was killed, her body was chopped up and burnt and the remains of the burnt body were disposed off.

If there was ever a slam dunk case of a cold-blooded police killing, in which everyone agreed on the facts, this would be it.  And yet, there is no justice to be had.

Question one: Was Sohrabuddin’s murder a fake encounter?

Question two: Was Kausar Bi also killed, burnt and her remains disposed off?

We then ask the question that minister Jaitely is also seemingly asking: Why is there no justice to be had?

Back to the basics

The Jaitely note, recycled from his letter to then Prime Minister Manmohan Singh in 2013, makes some broad charges that the CBI judge has also repeated.

Since these seem to have become part of political, and now apparently judicial folklore, they need to be addressed.

Question 3: Was Sohrabuddin sent by the ISI and LeT ?

As is often the case, it depends on who you’re talking to in Gujarat. Within hours after “pre-emptively” killing him, and while Kausar Bi was still locked up in one of the farmhouses waiting to be killed, D.G. Vanzara was telling reporters at a press conference that he was indeed a Lashkar terrorist.

But in a written reply to the Gujarat assembly, six months later on March 20, 2006, then chief minister Narendra Modi would only say that  Sohrabuddin was a murder suspect in an unspecified homicide case, and that he was wanted for offences under the Arms Act. He said the response was based on “information available at the time,” which meant D.G. Vanzara had overstated the case.

Minister Jaitely called him “a noted wanted mafia who operated in Gujarat, Madhya Pradesh and Rajasthan” who “was an absconder of various state governments,” in 2013.  Vanzara’s view found no backing by Jaitely himself.

But the minister is right about Sohrabuddin’s criminal background. Released from jail after the Jhirniya case, what exactly did Sohrabuddin do for a living? And how did he remain absconding for so long in precisely these three states?

So, if Sohrabuddin was allowed to roam freely in exactly these three states – who provided him protection? And why?  It’s a question that Mr Jaitely or his colleagues in the state governments he mentions, are perhaps best suited to answer.