The cartoon which won a prize from the Kerala Lalithakala Akademi shows India as a cow in a COVID-19 global summit. New Delhi: A plea has been filed in the Kerala high court against the Kerala Lalithakala Akademi for awarding a cartoon that showed India as a ‘cow’ at the COVID-19 Global Medical Summit, where England, China and the US are represented as humans.

The cartoon is drawn by Anoop Radhakrishnan, secretary of Kerala Cartoon Academy. It is titled ‘COVID-19 Global Medical Summit’. 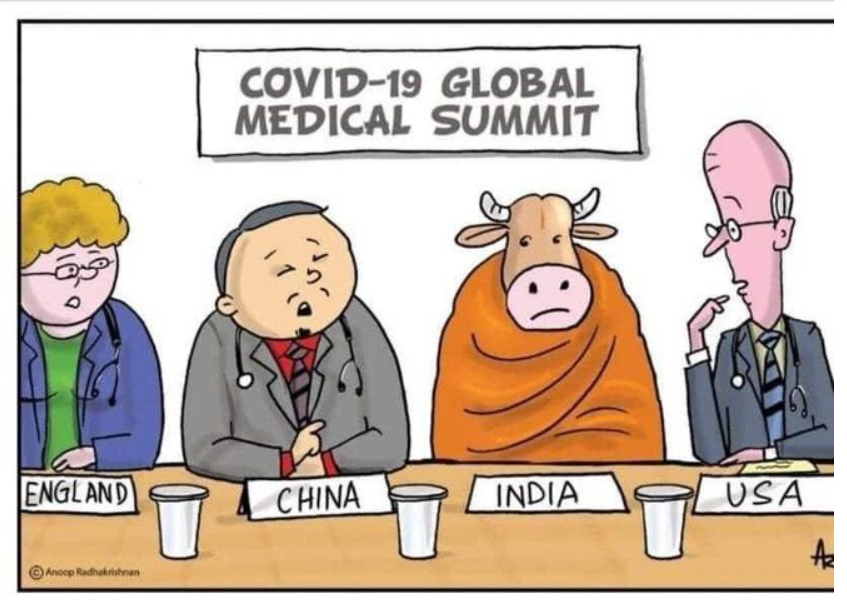 Kerala Lalithakala Akademi was established in 1962, with the objective of conserving and promoting visual arts, including painting, sculpture, architecture, and graphics. It is an autonomous cultural organisation of the government of Kerala.

According to LiveLaw, the secretary of the Akademi declared the Awards for 2019 and 2020. According to the petitioner, all the award-winning cartoons “portray India in a poor light and carry a distorted version of reality.”

The petitioner condemned that the cartoon bagged an honourable mention from the Akademi. The cartoon won the honorary award along with the Rs 25,000 prize money.

The petitioner argued that the cartoon prima facie demeans and disparages India: “…it is explicit that it is authored to demean and disparage India. Especially in the international arena, as it is clear-cut from its anti-national artistic elements. It is noteworthy; since the entire world is coping with a very extraordinary situation amid this pandemic. Many factions of the nation, irrespective of political tint, started agitation and protest against the Respondents breaching public order.”

The petitioner also argued that the cartoon is in “bad taste.”

Bharatiya Janata Party (BJP) state president K. Surendran said that those holding responsible positions are trying to insult and humiliate their own country.

What Lalithakala Academy has shown is nothing but absurdity. If those who are in power are trying to insult and humiliate the motherland, patriots won't think twice to oppose it. It's up to the state govt to control the academy. If otherwise, the people will be forced to do so. pic.twitter.com/pgBb94dK2R

According to News18, Yuva Morcha state secretary B.G. Vishnu has lodged a complaint with the DGP against the cartoon, alleging that the cartoonist and those holding responsible positions were trying to insult the country. The complaint has been filed against cartoonist Anoop Radhakrishnan and Nemom Pushparaj of the Lalithakala Akademi secretary.

The Kerala Lalithakala Akademi has been in a similar situation back in June 2019, when it awarded a cartoon that showed Bishop Franco Mulakkal as a ‘rooster’. His sceptre was adorned with a pair of woman’s underpants, a reference to the rape charges against him.

According to Scroll.in, the cartoon triggered a row, with several people claiming that it was vulgar and criticised the Christian community. The organisation’s chairman, Pushparaj, had said: “What had been depicted in the cartoon was the symbol of power and not any Christian symbol.” “When the staff is carried by a person, whom we can describe even as an anti-social, it is just a symbol of power.. there is no need to attach any holiness to it.”

He had further said: “Last time, the award was given to a cartoon criticising chief minister Pinarayi Vijayan. We had never attempted to change that decision also.”