Section 144 Is Not a Cover for Unchecked Police Action

In the 2011 Ramlila Maidan case, the Supreme Court held that disciplinary action should be taken against police officers who resorted to lathi-charge and the excessive use of tear gas shells.

Section 144 of the Code of Criminal Procedure must be one of the most well-known provisions under Indian law. “144 lag gaya hai (144 has been imposed)” brings cheer and dismay, depending on which side of the political divide you’re on.

The most popular conception of an order under Section 144 is that no more than three persons are allowed to congregate together publicly. This, however, is just one form of the order. Section 144 confers extremely wide-ranging powers that allow the district magistrate to order any person to “abstain from a certain act” or to “take certain order with respect to certain property in his possession or under his management”.  It is expected to be an emergency power to be used to prevent public disorder and to protect human life.

In a system and country, where the concept of restrictions on executive power is considered a naive or arcane idea, orders under Section 144 are used to prohibit protests, block the internet and even cable TV services. Broad orders like those passed under Section 144 are most often enforced haphazardly and unnecessarily.

After all, the imposition of Section 144 would not mean that people would not be able to congregate to watch moves in cinema halls or to attend classes at school or college. What this order does is to empower the police to break up demonstrations or protests which they, in their subjective assessment, do not approve of. For instance, no pro ‘CAA-NRC’ protest has been broken up at India Gate and Mandi House, protests by the well-heeled have not been broken up.

This is the real danger posed by Section 144. You have a body, namely the police, which is not trained or known for its restraint in the face of the disadvantaged. The consequences of the violation of Section 144 have to be legal, including prosecution for wilfully disobeying a public servant and for any other offences which may be committed.

Also read: The Misuse of ‘Lathi Charge’ by the Indian Police

The imposition of an order under Section 144 does not grant authority to the police to become violent. The police can use violence to disperse an ‘unlawful assembly’ only if the situation warrants so. Otherwise, the procedure has to be the same as committing any offence under the IPC. File an FIR and prosecute.

The Supreme Court was faced with the issue of police excesses for the purpose of enforcing an order under Section 144, when, in 2011, a crowd led by Baba Ramdev was removed from the Ramlila grounds during the night. While holding that Section 144 was rightly imposed, the court ordered compensation for the injured and noted that individual police officials had violated constitutional rights.

The court observed that:

“The police authorities, who are required to maintain the social order and public tranquillity, should have a say in the organizational matters relating to holding of dharnas, processions, agitations and rallies of the present kind. However, such consent should be considered in a very objective manner by the police authorities to ensure the exercise of the right to freedom of speech and expression as understood in its wider connotation, rather than use the power to frustrate or throttle the constitutional right.

Refusal and/or withdrawal of permission should be for valid and exceptional reasons. The executive power, to cause a restriction on a constitutional right within the scope of Section 144 Cr.P.C., has to be used sparingly and very cautiously.”

A complete and effective plan for dispersal

More specifically, and pertinently, regarding the behaviour of the police in the current protests, the court held that:

“It is not only desirable but also a mandatory requirement of the present day that the State and the police authorities should have a complete and effective dispersement plan in place, before evicting the gathering by use of force from a particular place, in furtherance to an order passed by an executive authority under Section 144 of the Cr.P.C.” 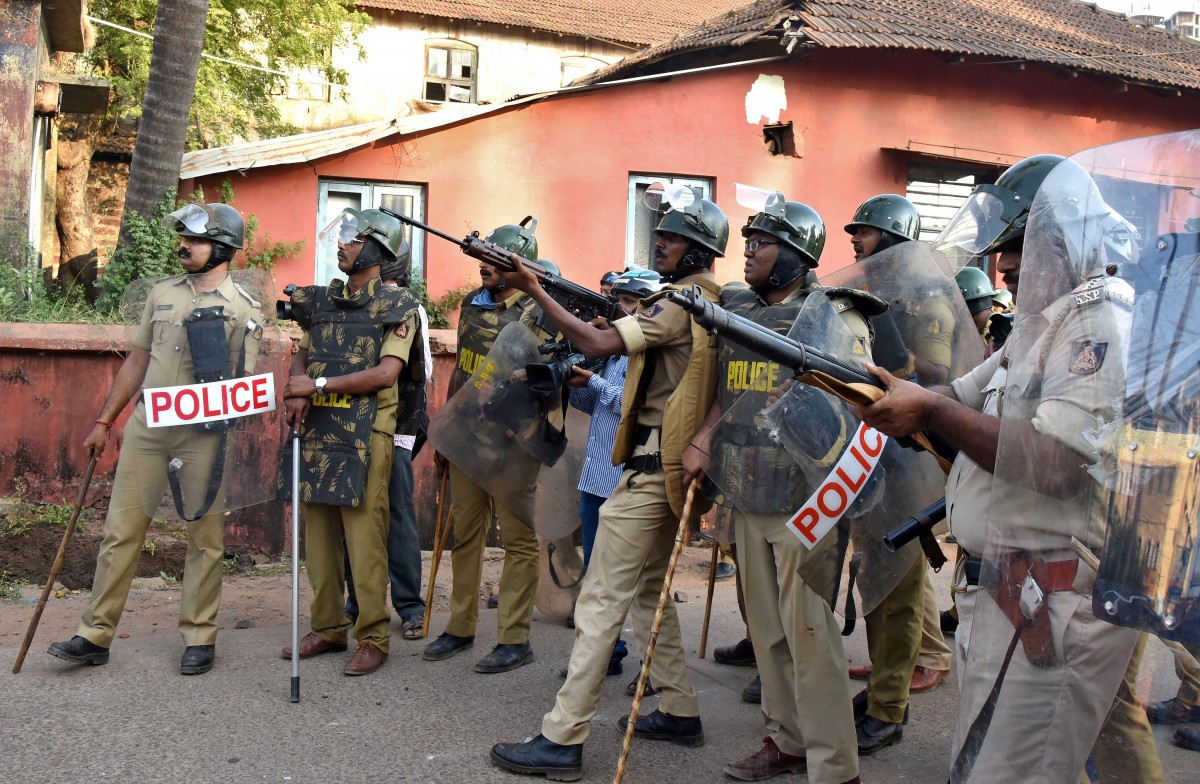 The first requirement for the police then is a “complete and effective dispersement plan”. It is clear that the authorities did not  abide by this at Jamia or at Aligarh, or, for that matter, any of the other places in Uttar Pradesh which have witnessed police action.

Chasing people into their hostels and homes is no part of the enforcement of Section 144. In the Ramlila incident, even when the imposition of Section 144 was upheld, directions were passed to prosecute the police officers responsible for the assault on the people. Section 144 is not, and cannot, be a cover for unchecked police action.

In fact, the Supreme Court, in the case of the Ramlila incident, apart from criminal cases against members of the police and public who indulged in violence against persons and property, also specified that disciplinary action must be taken against “all the erring police officers/personnel who have indulged in brick-batting, have resorted to lathi charge and excessive use of tear gas shells upon the crowd, have exceeded their authority or have acted in a manner not permissible under the prescribed procedures, rules or the standing orders and their actions have an element of criminality. This action shall be taken against the officer/personnel irrespective of what ranks they hold in the hierarchy of police”.

Another category of police personnel singled out for action by the Supreme Court included, “the police personnel who were present in the pandal and still did not help the evacuation of the large gathering and in transportation of sick and injured people to the hospitals have, in my opinion, also rendered themselves liable for appropriate disciplinary action.”

The incidents of the past couple of weeks show that the police seems to have learnt no lesson from their previous experiences. The same acts, for which action was ordered by the Supreme Court in 2012, have been repeated in 2019.