SC Order On Karnataka Crisis: What It Says and What It Doesn’t

The court protected the freedom of the rebel MLAs to either take part in the assembly proceedings on Thursday or opt out, but what it actually held is that these MLAs are free to comply with or defy the whip issued by their parties. 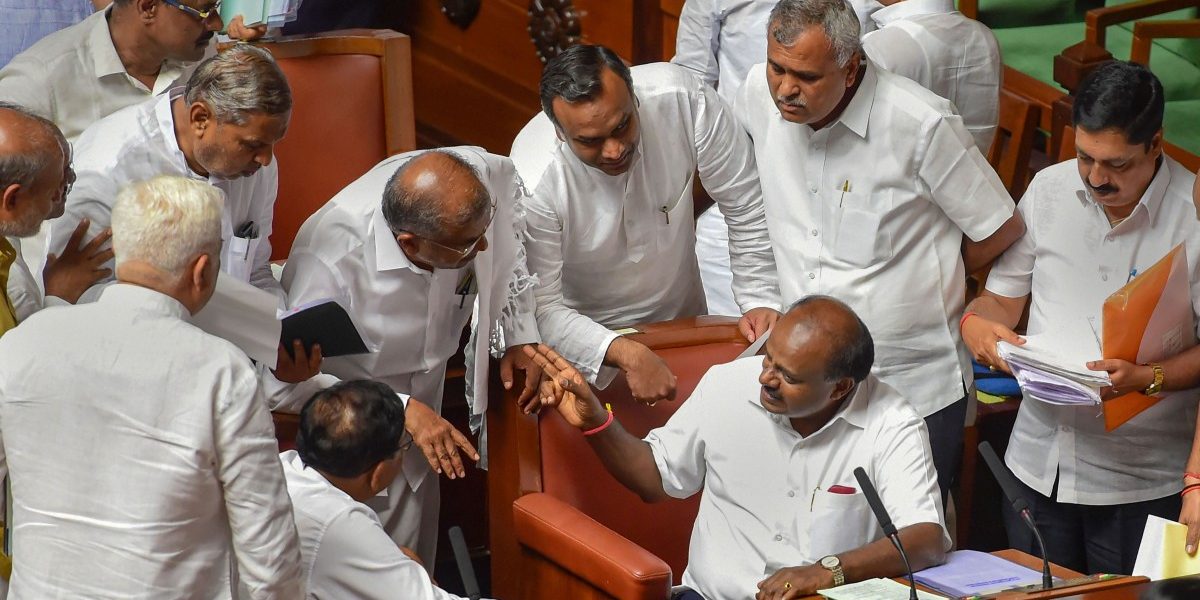 Karnataka chief minister H.D. Kumaraswamy and his deputy G. Parameshwara with other members during an assembly session at Vidhana Soudha. Photo: PTI

The Supreme Court’s order on Wednesday in Pratap Gauda Patil and Others vs State of Karnataka and Others has seemingly satisfied the rebel MLAs who are the petitioners as well as the respondents, the assembly speaker K.R. Ramesh Kumar and the state chief minister, H.D. Kumaraswamy.

This is not surprising as the bench comprising the Chief Justice of India Ranjan Gogoi and Justices Deepak Gupta and Aniruddha Bose steered clear of contentious issues raised by the parties on how the speaker ought to deal with the resignations of the rebel MLAs from the assembly, and whether he could address their resignations and the disqualification petitions pending against them holistically.

Keeping in view the fact that the state assembly is to take up the trust motion moved by the chief minister on Thursday, the bench permitted the speaker to decide on the request for resignation by the 15 members of the House “within such time frame” as he “may consider appropriate”.

The bench also took the view that in the present case, the discretion of the speaker while deciding on the matter of resignations should not be fettered by any direction or observation of this court. The speaker should be left free to decide the issue in accordance with Article 190 read with Rule 202 of the Rules of Procedure and Conduct of Business in Karnataka Legislative Assembly framed in exercise of the powers under Article 208 of the constitution.

It is apparent that the bench saw merit in the contentions of the senior counsel representing the chief minister, Rajeev Dhavan, that its order on July 11 directing the speaker to decide on the resignations within a few hours after 6 pm was flawed, as it was issued without hearing the speaker. The speaker’s non-compliance with that order perhaps made the bench realise that it was inconsistent with the doctrine of separation of powers between the legislature and the judiciary.

The bench, in the last paragraph of the order, held:

“We also make it clear that until further orders, the 15 members of the assembly ought not to be compelled to participate in the proceedings of the ongoing session of the House and an option should be given to them that they can take part in the said proceedings or to opt to remain out of the same”.

The bench limited itself to the options before the rebel MLAs, in order to “maintain the constitutional balance and the conflicting and competing rights” canvassed before it. The bench was not keen on “exhaustive enumeration of the Constitutional principles”, because that would have taken more time, whereas the Thursday’s proceedings in the assembly required an immediate answer without compromising the rights of the contending parties before it. 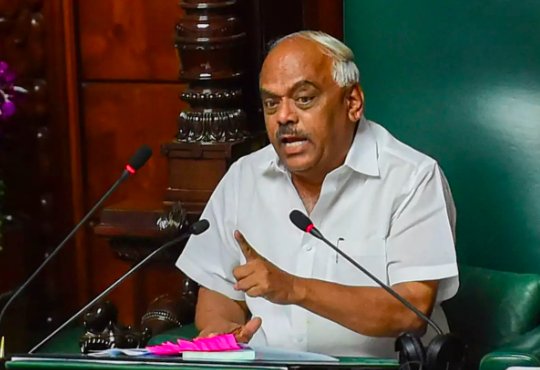 Does the above paragraph rule out the issue of the whip by the Janata Dal (Secular) and the Congress against the rebel MLAs to participate in the Thursday’s proceedings of the assembly, and vote in favour of the chief minister’s trust motion?

It is reasonable to ask whether the issue of party whips to the rebel MLAs to take part in the proceedings of the assembly on Thursday would amount to compelling them to do so – which the Supreme Court has expressly ruled against. The answer to this can be found in the case law, as decided by the Gauhati high court in 2008, which holds the field so far.

In Yitachu vs Union of India, decided by the Gauhati high court on March 12, 2008, a bench comprising Justices J. Chelameswar, Ranjan Gogoi – present CJI, who was then a judge of the high court – A. Roy, I. Ansari and B. Katakey, held that the Tenth Schedule itself does not prohibit any member of a legislature from violating the direction/whip issued by a political party to legislators belonging to that political party.

The object, sought to be achieved by the Tenth Schedule, according to the bench of the Gauhati high court, is to ensure the loyalty of the legislators to a political party, which sponsored the candidature of such a legislator at the election. It was a remedy, which the parliament sitting as a constituent assembly, thought fit to provide in order to curb the evil of widespread practice of unprincipled floor-crossing motivated by the concerns of personal benefit, the Gauhati high court had held:

“Parliament could as well have declared that such an act of voting (which attracts the consequence of the termination of the membership of such a member) should also be ignored for the purpose of deciding the issue on which the voting took place. But it did not. Though it would be difficult to speculate the reasons for such omission, we hazard a guess that it is in recognition of the possibility of honest dissent. It is, thus, a balancing act between the party discipline and the convictions of individual members.”

The Gauhati high court had made it clear in this case that the disqualification imposed by paragraph 2(1)(b) must be so construed as not to unduly impinge on the said freedom of speech of a member. This, it held, would be possible if paragraph 2(1)(b) is confined in its scope by keeping in view the object underlying the Tenth Schedule, namely, to curb the evil of mischief of political defection motivated by the lure of office or other similar considerations. “The said object would be achieved if the disqualification incurred on the ground of voting or abstaining from voting by a member is confined to cases where a change of Government is likely to be brought about or is prevented, as the case may be…”, the high court had held.

Also read | Why Is the MLA a Commercial Commodity in Karnataka?

The Gauhati high court, while interpreting the Tenth Schedule, was seeking to answer the question whether the speaker could eliminate a vote given in contravention of a whip. The high court held that such a consequence was not contemplated by the constitution and therefore, the speaker would be wrong, if he does not take into account those votes cast in violation of the whip, or prohibits any MLAs from taking part in the proceedings to decide a confidence motion.

A view of the Supreme Court of India in New Delhi. Photo: PTI

On Wednesday, the Supreme Court bench was concerned whether the rebel MLAs, camping in Mumbai, could abstain from Thursday’s proceedings in the Karnataka legislative assembly – keeping in view their resignations from the assembly, which are yet to be decided on by the speaker – and whether they could be subjected to their respective party whips.

Ironically, neither the petitioner nor the respondents before the court raised this issue during the hearing. The petitioners assumed that they had the right to abstain. The respondents did not question their right as they were only concerned about defending the speaker’s power to decide the consequences of their exercise of that right.

Although the Supreme Court protected the freedom of the 15 rebel MLAs to either take part in the assembly proceedings on Thursday or opt to remain out of the same, what it actually held is that these MLAs are free to comply with or defy the whip issued by their parties. The bench did not consider the probable consequences of their decision to abstain, which is equally a violation of the whip issued to them. By directing that the speaker’s decision on their resignations be placed before it, the bench reserved its right to judicially review the speaker’s decision after it is taken.

It is so because the violation of a whip by a member does not result in automatic disqualification of that member. As such conduct by a member could be condoned by the party leadership, or faced with disqualification proceedings, whose outcome is not predictable in advance, it could not be said that issue of the whip itself amounts to compelling a reluctant member to attend the proceedings.