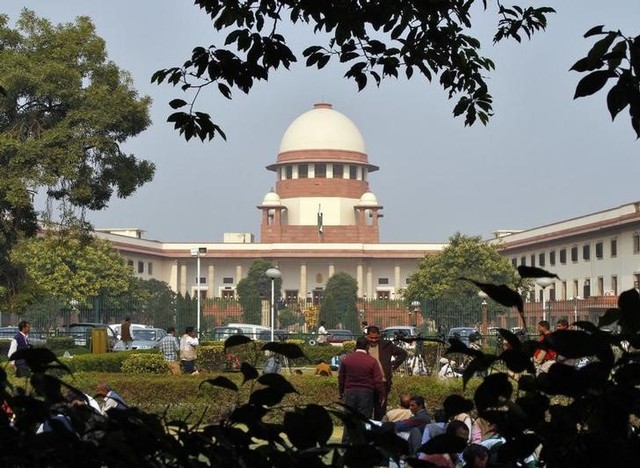 A view of the Supreme Court building in New Delhi. Photo: Reuters

New Delhi: A plea was filed in the Supreme Court on Wednesday seeking a review of its verdict upholding the 10% quota introduced in 2019 for the economically weaker sections (EWS) among the general category in admissions and employment to government institutions.

Congress leader Jaya Thakur filed the petition in the apex court, saying that while reservation for the Scheduled Castes and Scheduled Tribes is in proportion with their population, reservations for Other Backward Classes are insufficient but the quota for the upper castes is “disproportionally far above the need”.

On November 7, a five-judge constitution bench of the top court upheld the quota. The bench delivered a 3:2 majority decision in favour of the 103rd Constitution Amendment, which provided the EWS quota. Justices Dinesh Maheshwari, J.B. Paridwala and Bela M. Trivedi formed the majority opinion and authored three separate judgments. Justice Ravindra S. Bhat authored the minority view, which was supported by then Chief Justice of India U.U. Lalit.

According to LiveLaw, the plea seeking a review petition says that the forward caste population is only 6% of the country’s population yet 10% of seats in government educational institutions and jobs will be provided to the ‘poor of the forward caste’ due to the EWS quota.

“The numbers clearly shows that this reservation of 10% is disproportionate and there is no grounds or justification whatsoever for arriving at this figure of 6%. The 10% reservation provided to the EWS of only forward caste, is breach of equality code amounting to discrimination,” the plea says.

Giving the example of Madhya Pradesh, the plea argues that though OBCs constitute more than 50% of the state’s population, only 13% of the posts in state services and educational institutions are reserved for these communities. The reservations for the SC and ST communities are in proportion with their share of the population, the plea says.

Thakur has also argued that because of OBCs, SCs and STs are not entitled to take the benefits of the EWS reservation, it is a clear violation of Articles 14 (equality before the law) and 16 (equality of opportunity) of the constitution of India.

The plea seeking a review has also countered assertions made by the judges in the majority. According to LiveLaw, the plea says that Justice Dinesh Maheshwari “gave a contrary finding that 103rd amendment is not violating the limit of 50%, which is in fact a complete violation of the law settled in the Indira Sawhney case”, which capped caste-based reservation at 50%.

“Also, Justice Maheshwari’s finding that the exclusion of SC/ST/OBC from the 103rd Amendment does not violate equality, is completely problematic because the yardstick for the same is one’s economic basis only,” the plea argues.

“Justice [Bela M.] Trivedi, while upholding the 103rd amendment stated that a re-visit into the reservation policy is necessary, which is contrary to her own findings in the judgement,” the plea states, according to LiveLaw.