As the judiciary represents the Indian state, showcasing the symbology of one particular religion in courts amounts to violating the principle of secularism

Ganpati temple within the premises of the Juvenile Justice Board and CWC, Mumbai. Credit: Arya Raje 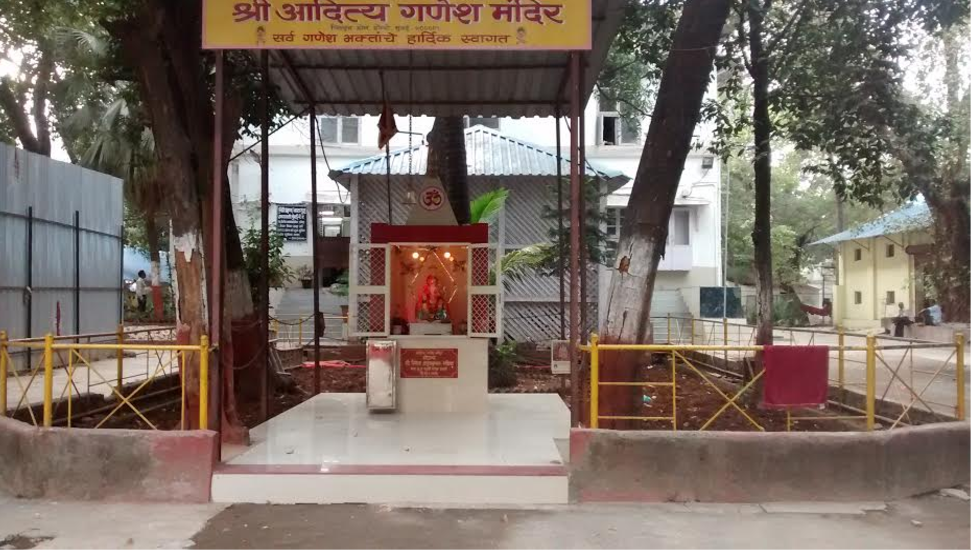 Ganpati temple within the premises of the Juvenile Justice Board and CWC, Mumbai. Credit: Arya Raje

As you enter the Children’s Home in Dongri, Mumbai, you are greeted with a framed photo of Ganpati. Further ahead, a Ganpati temple occupies a significant area of the premises. This is where all the children who are accused of committing offences in Mumbai are brought, as well as where the Child Welfare Committee functions. Parents and children waiting for their case to be brought up at the Juvenile Justice Board sit on the fence surrounding the temple or the stairs because there is no seating provided for them. Should religious symbols – especially when these symbols are representative of a single religion, be present within a court?

The sessions court in Mumbai also has an idol of Ganpati inside the premises, while various walls carry posters of religious symbols. The family court at Bandra has a small temple structure suspended on a wall, with a Ganesh idol and a figure of Sai Baba housed in it.

India is a secular nation, and the fundamental rights make it a constitutional mandate for the state to not discriminate on the basis of religion. The court is an institution of the state, one where millions of people knock on its doors seeking justice. People accused of crimes are brought before it, victims of crimes and their families go there and a large number of people work in courts as lawyers, court officers, clerks and judges. The doors of the court are open to all those in India who seek justice or are caught in the judicial system, while also being a source of employment to many; the judicial space is one which is inhabited by diverse people. 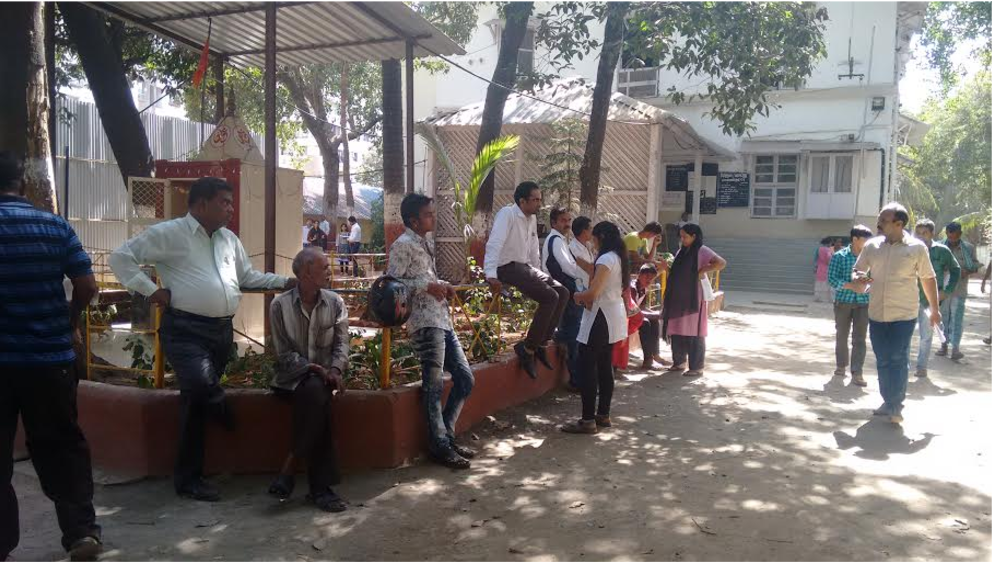 People sitting on the fence because of a lack of seating space at the JJB and CWC, Mumbai.Credit: Arya Raje

The judiciary is representative of the Indian state, as one of its three arms – and the Indian state claims to be secular. Does showcasing the symbology of one particular religion within a court violate the principle of secularism? We can take a look at some of the debates and discussions in the constituent assembly on the idea of secularism, which not only shaped the concept but also proposed ways in which it could be translated into practice.

As Professor K.T. Shah, a member of the constituent assembly suggested, “The state in India being secular shall have no concern with any religion, creed or profession of faith; and shall observe an attitude of absolute neutrality in all matters relating to the religion of any class of its citizens or other persons in the Union”. 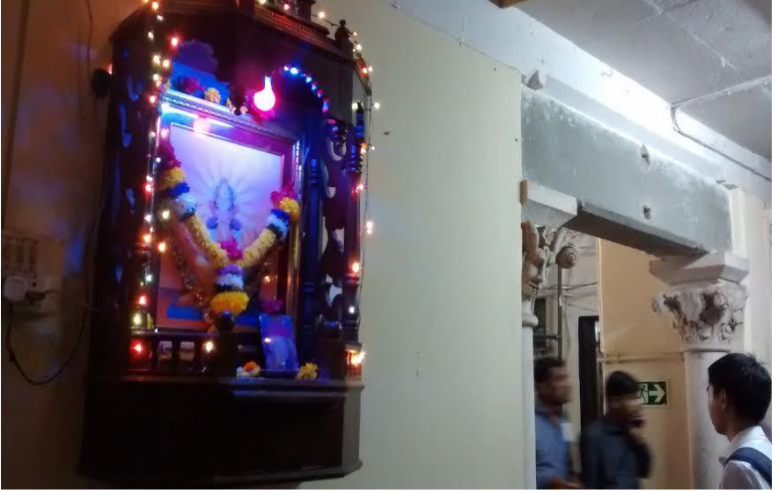 Pandit Lakshmi Kanta Maitra elaborated, “By secular State, as I understand it, is meant that the state is not going to make any discrimination whatsoever on the ground of religion or community against any person professing any particular form of religious faith. This means in essence that no particular religion in the State will receive any state patronage whatsoever. The state is not going to establish, patronize or endow any particular religion to the exclusion of or in preference to others…”

Jawaharlal Nehru described the idea of a secular India as, “We are building a free secular state, where every religion and belief has full freedom and equal honour, where every citizen has equal liberty and equal opportunity”.

A secular state, thus, is one which does not endorse any particular religion to the exclusion of others. The state should observe an attitude of neutrality and impartiality towards all religions, as the state is concerned with the relations between humans, and not with the relation between humans and God, which is a relation of individual conscience and personal liberty. No religion can be upheld as the religion of the state.

Religion and jurisprudence in the US

Let us also take a brief look at jurisprudence in the US, which is similar to India in the sense that the state purports to be secular, and has one particular religion which is observed by the majority.

Courts in the US have in several cases considered the legality and constitutionality of placing religious symbols in courts and public places. Most cases in the US arose when counties placed nativity or Christmas-themed displays during the season or displayed the biblical ten commandments within the premises of a courtroom. By and large, these symbols and displays have been struck down because they appear to endorse a particular religion, in this case, Christianity. 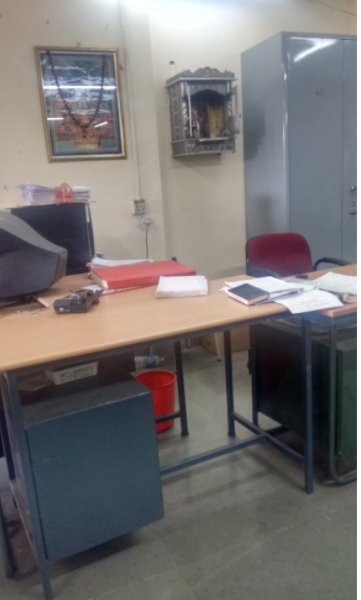 In one case, two Kentucky counties had posted framed copies of the ten commandments in their courthouses. A lawsuit was filed demanding that the commandments be removed. In his judgement, the justice emphasised the principle of government neutrality among religions, and between religious and nonreligious beliefs. The principle, he said, is to ensure that religion does not ultimately cause political divisiveness and civic exclusion. The threats of divisiveness and exclusion, he said, are acute when the government permanently and prominently displays something which is unquestionably religious.

Secularism is perhaps perceived a little differently in India, where religion is, for many of its people, an inextricable part of life, woven into the fabric of our society. We grapple between ‘no concern secularism’ which advocates a strict ‘wall of separation’ between the functions of the state and religious practices, and ‘equal respect secularism’ which can be compared to the idea of ‘Sarva Dharma Sambhava’, mandating recognition and acceptance of religious practices.

However, while we have a multiplicity of religions and religious beliefs, the symbols in courts appear to be only those of Hindu gods, thus excluding those who follow other religions as well as those who do not subscribe to any faith. In fact – not only are these idols exclusively of Hindu deities, they are also images of those gods which are typically worshipped by the mainstream upper caste – a specific kind of Hinduism. If no particular religion is supposed to receive patronage from the state at risk of excluding others, what does it mean when only Hindu symbolism is prevalent in a court room? 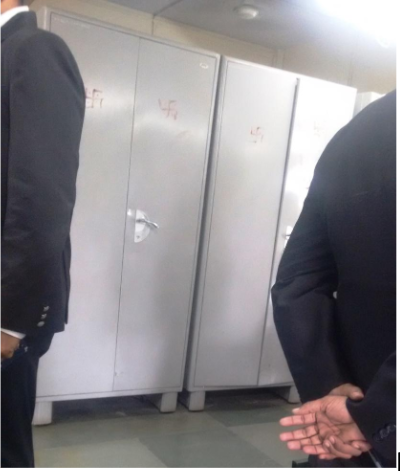 One could argue that these idols and symbols are not representative of the state, per se. They are there primarily for the people who work in the courts and those who hold that particular belief. However, these people are performing their functions in their capacity as public officials and as representatives of the state. Further, what about those who follow a different faith? Would it be equally acceptable for a Muslim or a Christian court officer to erect a structure which represents their faith within the premises of an Indian court?

Throughout Mumbai, lower courts routinely display posters or small idols of various Hindu gods. Religious symbols such as the swastika dot the doors of courtrooms and court filing departments. Sometimes, a religious frame or poster is placed inside the premises of a courtroom. Even the Bombay high court is not – its baggage security check holds a framed photo of Sai Baba, and the space above the high court elevator has a picture depicting multiple Hindu gods. Some of the filing and registration departments also contain temple structures which have been fixed on the walls as well as posters of Hindu deities plastered on walls or desks.

US courts have noted that when the government displays something which is unquestionably religious, it introduces the threat of exclusion and divisiveness. Indeed, showcasing Hindu gods in the courts does indicate that the state is endorsing this particular religion. It appears to be state sponsorship of the Hindu religion. This could be alienating to those who profess another faith or to those who do not follow any religion. This kind of imagery in courts propagates and perpetuates the notion of the dominance of a Hindu majoritarian culture in the Indian state.

One possible way to demonstrate that the judiciary is secular and objective could be by adding symbols from other religions to indicate that the state is not favouring one religion over others. Or, instead of attempting to address the issue of fair representation of all faiths and sects in India within a space which is occupied by the state, they could simply remove all the symbols exclusively associated with Hinduism from courts’ premises, leaving them free of all religious imagery altogether.

Arya Raje is a lawyer practising in Mumbai. She has a Masters degree from UCLA School of Law and works in the area of human rights law and advocacy.