The Ramana Effect: The 48th CJI Has Restored Judicial Spirit and Spark

The country's top judge has been careful not to allow the Supreme Court to get dragged into politicians’ partisan quarrels.

Five months ago when it was announced that N.V. Ramana would be  the next Chief Justice of India, this column had said he had the potential of restoring to the judiciary its lost glory and independence a la T.N. Seshan. The argument was greeted with outright skepticism, even derision. That, though, was not surprising.  So disappointingly dismal had been the leadership record of his recent predecessors that it was simply unthinkable that as CJI, Justice Ramana would even think of going off the Modi-Shah reservation.

On the other hand, the hope for a T.N. Seshan-like reinvigoration of the apex court’s institutional elan was predicated on a simple consideration: it was just fortuitous that the incoming chief justice had cauterised a potential vulnerability when an in-house inquiry had, a few weeks earlier, exonerated him of any wrong-doing. Simply put, the new chief justice was beyond the reach of the ruling clique which has perfected the blue-book on coercion, manipulation and blackmailing.

The constitution of India mandates an independent and autonomous judiciary. And, it is the primary – perhaps, the only role – of a chief justice to be a zealous guardian of the apex court’s assigned space in our constitutional order. It requires an exceptional rottenness of character or some shabby calculation for an incumbent to surrender the dignity and majesty of that exalted office to the blandishments of the ruling establishment. Nonetheless, it needs to be noted that notwithstanding the animated obsequiousness of Messrs Dipak Mishra, Ranjan Gogoi and S.A. Bobde, the Indian judicial elite has remained deeply cognizant of its constitutional mandate and institutional dharma as an essential republic virtue.

After all, anyone who has made it as a judge of the Supreme Court of India is sure to value personal honour and self-esteem above petty post-retirement temptations.

As CJI, Justice Ramana has simply restored judicial spirit and spark, without in any way seeming to want to invoke a gratuitous confrontation with the ruling clique. About time. At the same time, he has been careful not to allow the court to get dragged in  politicians’ partisan quarrels.

Indeed, a ‘Raman(a) Effect’ became discernible when, in his Justice P.D. Desai Memorial Lecture on June 30, he reiterated a simple cautionary axiom: democracies do not elect tyrants. His subtle but critical distinction between ‘Rule of Law’ and ‘Rule by Law’ was a much-needed reminder to all stakeholders that a parliamentary majority could not be construed as a license for capricious governance. No ruler – whatever the size or shape of his or her ‘democratic mandate’ or her or his presumed popularity among the masses – was above the constraints and restraints enacted into the constitution. After all, constitutional democracies are defined only by a marked absence of arbitrariness of all sorts and at all levels of organised public life.

The Constitution insists on a certain kind of equilibrium in our organised political life; and, in other words, those who have the responsibility to operationalise the Indian state administratively and politically, expected to undertake the task in an accountable and legal manner. The essential leadership role of a Chief Justice of India would be to ensure that the judiciary keeps its institutional eyes and ears open to the sights and sounds and texture of any incipient authoritarianism.

The court, in particular, needs to ensure a certain balance between the state and the citizen. We need to necessarily make an assumption that the honourable judges have the requisite intellectual acuity and the moral clarity to see through the demagogue’s tricks. This is an age when every policeman wants sweeping power in the name of defending the realm against enemies, real and concocted. It is the hallmark of an evolved constitutional democracy that it does not readily concede to any demagogue – however loudly he or she may cry ‘national security’.

Regrettably, under the watch of CJI Ramana’s recent predecessors, a marked imbalance has crept in the state-citizen equation, entirely at the expense of civil liberties and personal autonomy. This imbalance is the first step towards non-democratic experiments. This unequal and unfair relationship needs to be rectified. And a Ramana court has its task cut out clearly. 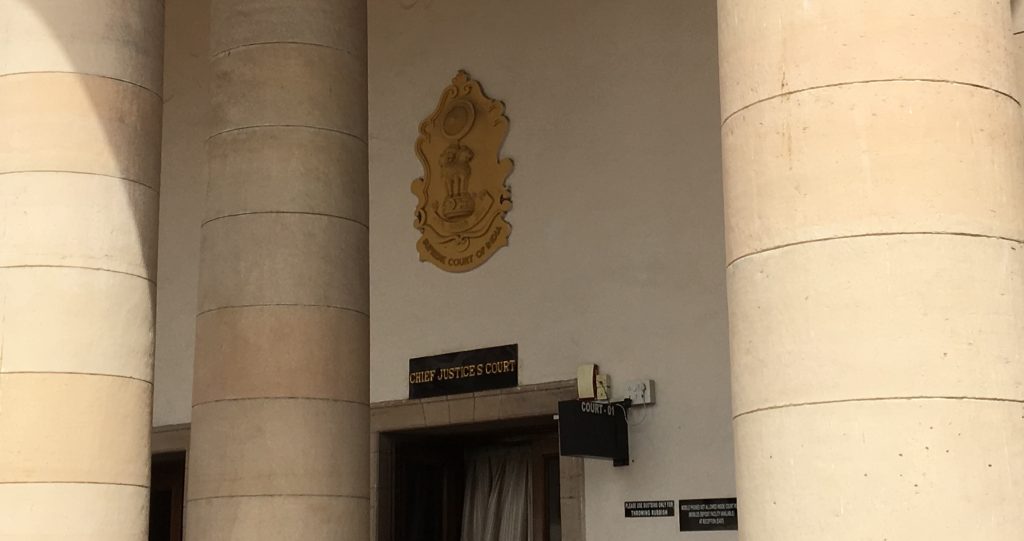 Entrance to the Chief Justice of India’s court at the Supreme Court of India. Photo: Special Arrangement/The Wire

The role of statutory bodies

An equally critical and pressing task before the apex court is to restore to the political system the fair rules of the democratic game; in practical terms, it means that a message has to go out to our constitutional institutions – beginning with the Election Commission, the armed forces and other statutory bodies – that they have an obligation to perform their mandate without getting embroiled in partisan politicians’ petty battles. Mercifully, operatives and functionaries in our vast system still do know how to  make a distinction between ‘professional’ duty and extra-professional exuberance displayed out of timidity or worse, political bias and bigotry.

The court would be rendering immense service to the constitution of India if it can send out a message down the line that judicial indulgence may not be able to all those who go out of their way to please the incumbent political authority. Law will catch up, sooner or later, with those who think they are untouchable because of political protection. A Ramana court can have more than a dozen occasions each week to throw the book at errant operatives.

Perhaps the bottom-line of the Raman(a) Effect setting in is a confidence that once again we have a Supreme Court that thinks for itself.

Certainly no judge of substance would allow herself to be mesmerised by any political leader proclaiming too loudly his deshbhakti, honesty, sincerity or hard work. No judge, from Chief Justice of India down to the district session judge can lend his imprimatur to any manifestation of unwisdom, megalomania, pettiness, or a communal virus dressed up as administrative firmness.

All said and done, it is the task of sane voices and constitutional institutions to rescue democracy itself from the follies and frailties of elected tyrants.