RS Polls: Gujarat Congress MLAs Who Quit Can Still Be Prosecuted if Bribery is Alleged

Legislators who take bribes to vote a particular way can't be prosecuted, the Supreme Court had ruled in 1998. But if they don't vote, they no longer have immunity and can be punished for any gratification received. 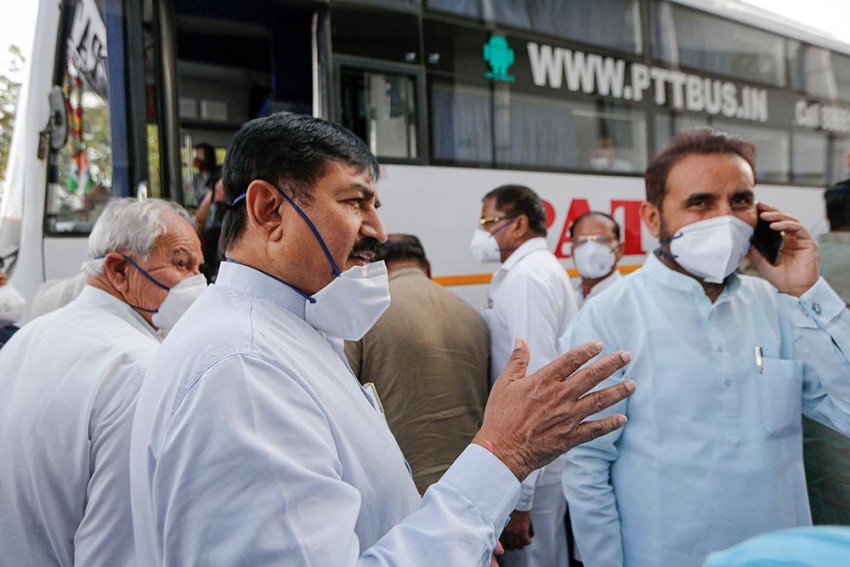 Gujarat Congress MLAs, still loyal to the party, arrive at the airport in Ahmedabad from Jaipur before the Rajya Sabha elections were postponed to June 19. Photo: PTI

New Delhi: Three Congress MLAs have resigned from the Gujarat legislative assembly ahead of the June 19 Rajya Sabha elections for four seats from the state.  Along with five other MLAs of the party who resigned in March, when the Rajya Sabha elections were postponed due to the outbreak of coronavirus, the tally of those who quit now stands at eight.

The strength of the Congress in the 182-member state assembly with nine vacancies has now been reduced to 65.  In the assembly elections held in 2017, it had won 77 seats.

The BJP’s success in inducing resignations of non-BJP MLAs from the assembly in the recent past to bring down democratically-elected governments with majority support has apparently convinced it that it can try a similar strategy in the Rajya Sabha elections.  With each candidate for the four Rajya Sabha seats from Gujarat requiring 35 votes in the assembly to win, the BJP’s strategy of inducing resignations from the opposition camp can indeed deliver it a favourable outcome at the elections.

It is naïve to believe that these Rajya Sabha election-eve resignations from the assembly are principled and are not motivated by extraneous considerations.   Although the speaker of the assembly is bound to accept these resignations – consistent with the recent Supreme Court judgments in the Karnataka and Madhya Pradesh cases –  the Election Commission cannot ignore allegations of these resignation, and consequently the Rajya Sabha elections, being tainted by money power.

In 2012, the Election Commission, acting on a complaint from two MPs that the Rajya Sabha elections scheduled to take place in Jharkhand were being vitiated by money power and horse trading, alerted the Income Tax (IT) Department.  The IT Department seized a huge amount of money being transported for distribution among the MLAs prior to the election.  The CBI, which investigated the case on the direction of the Jharkhand high court and the Election Commission, charge-sheeted Sita Soren, currently an MLA from the Jama constituency in Jharkhand, as having received illegal gratification of Rs. 50 lakhs from one R.K. Agarwal, who contested as an independent candidate, for proposing his nomination and also Rs. 1 crore for voting in his favour.

But Sita Soren never voted in favour of Agarwal, despite allegedly receiving money to do so. The CBI alleged that Sita Soren, daughter-in-law of JMM founder Shibu Soren, had accepted bribes on the promise of electing an independent candidate to the Rajya Sabha, which amounted to corruption under the Prevention of Corruption Act, but voted for her own party candidate.

Before the Jharkhand high court, Sita Soren claimed the defence of immunity under Article 194(2) of the Constitution, which is in pari materia of Article 105(2) meant for Members of Parliament.   Under Article 194(2), no member of the legislature of a state shall be liable to any proceedings in any court “in respect” of anything said or any vote given by him or her in the legislature or any committee thereof.

In P.V.Narasimha Rao v State (CBI-SPE) (1998), the Supreme Court’s Constitution bench, in a 3:2 decision, held that the immunity from prosecution of a member under Article 105(2) can be extended to cover receiving a bribe or entering into a conspiracy to receive a bribe for the purpose of giving a vote in the house. Article 105(2), according to the majority view, gives complete immunity to such MPs, for anything done which had a nexus with the vote, irrespective of whether the conduct in question preceded or followed the vote.

In P.V. Narasimha Rao, the then prime minister was accused of being part of a criminal conspiracy with members belonging to the Jharkhand Mukti Morcha (JMM) and others to defeat the no-confidence motion against the Congress government headed by him using illegal gratification.  Although a trial court in 2000 convicted and sentenced Rao and the former governor of Bihar, Buta Singh to three years rigorous imprisonment, the Delhi high court acquitted them in 2002.  With the CBI not filing an appeal in the Supreme Court, the landmark case was consigned to history.  Based on the Supreme Court’s interpretation of Article 105(2), a trial court discharged the former JMM MPs, Simon Marandi,  Suraj Mandal and Shibu Soren, who had allegedly received bribes of over Rs. 4 crore in 1993 to back the Rao government by voting against the no-confidence motion.

In the Supreme Court, the majority judges had reasoned that the object of the protection of MPs and MLAs under  Articles 105(2) and 194(2) respectively is to enable legislators to speak their mind in the house and vote in the same way, freed of the fear of being made answerable on that account in a court of law. The expression “in respect of”, they held, in these two provisions must hold a broad meaning – that the alleged conspiracy had a nexus to those votes, and the proposed inquiry into the criminal proceedings was in regard to the motivation thereof.

The majority judges found that Ajit Singh, who was party to the conspiracy, but did not cast a vote, would have no protection for the reason that there was no nexus in between the act of conspiracy and the vote.

The Jharkhand high court, while dismissing Sita Soren’s appeal, took note of the fact that she did not vote in favour of R.K. Agarwal, her alleged bribe-giver, and therefore, equated her with Ajit Singh in the JMM bribery case.  “In that event, one can say that act of receiving money from Agarwal was having no nexus with the act of casting vote by the petitioner…if the alleged act of receiving money pursuant to the conspiracy and the agreement, if the vote is not cast in favour of the person from whom money was received, then casting of vote will have no nexus with the alleged act of receiving money…”, the bench held.

Also Read: We Voters Did Our Duty but the Election Commission Failed to Do the Same

The Supreme Court is yet to hear Sita Soren’s appeal against the Jharkhand high court’s judgment, the case having been referred to a constitution bench in view of the precedent set in P.V. Narasimha Rao.

The majority three judges in that case , while acutely conscious of the seriousness of the offence, felt that the wrongful act and the “sense of indignation” of the bench should not lead to a narrow construction of the constitutional provisions which may have the effect of impairing the guarantee to effective parliamentary participation and debate.

“Having considered the [Sita Soren] matter”, the bench comprising the then CJI, Ranjan Gogoi, and Justices S. Abdul Nazeer and Sanjiv Khanna said on March 7, 2019, “we are of the view that having regard to the wide ramification of the question that has arisen, the doubts raised and the issue being a matter of substantial public importance we should be requesting for a reference of the matter to a larger bench”.

The case was listed before a constitution bench comprising the then CJI Ranjan Gogoi, and Justices N.V. Ramana, D.Y. Chandrachud, Deepak Gupta and Sanjiv Khanna on April 4 last year, but was not taken up on that day.  The case has been pending since then.

By inducing the Congress MLAs in Gujarat to resign from the assembly ahead of the Rajya Sabha vote, the BJP has deprived these MLAs of any “nexus” between the alleged conspiracy to use money power to win them over, and their actual vote in the Rajya Sabha elections.  The absence of any such nexus, if the precedents set in the P.V. Narasimha Rao (Supreme Court) and Sita Soren (Jharkhand High Court) cases are any indication, will make these MLAs lose any immunity which those who vote can avail of under Article 194(2).

The pendency of Sita Soren’s appeal before the constitution bench in the Supreme Court can provide little relief to these MLAs, as their act of resignation from the assembly, allegedly due to illegal gratification, can have no nexus with their vote in the assembly, which in any case cannot be cast in favour of anyone in the Rajya Sabha poll.  The factual matrix of the Gujarat MLAs’ resignation, although different, cannot set them apart from the Ajit Singh and Sita Soren cases.  In all the three, the nexus between the alleged act of bribery and the act of voting in the House is conspicuous by its absence, thus depriving them of any constitutional immunity from criminal prosecution.

It is possible that a larger bench of the Supreme Court may review its previous decision in P.V. Narasimha Rao; but it is unlikely to extend the immunity from prosecution to the likes of Ajit Singh, whose alleged act of bribe-taking escaped immunity from prosecution since it was not linked to the casting of an actual vote in parliament.   Ironically, the trial court had acquitted Ajit Singh in 2000, as it found that the CBI had failed to substantiate its charges against him as many material witnesses had turned hostile during the recording of evidence.  But that is a different story altogether.