On Independence Day, Activists Give Rajasthan HC a Shroud to Cover Manu Statue

The controversial statue has been standing for decades, despite repeated protests against it. 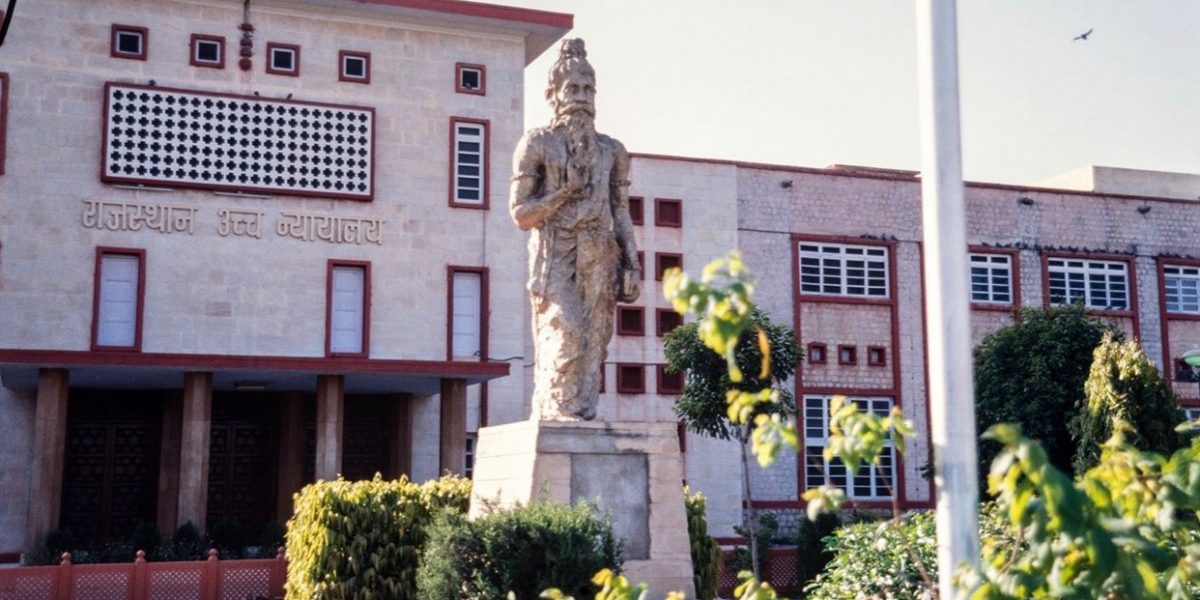 The statue of Manu outside the Rajasthan high court. Photo: Twitter

Jaipur: The controversial statue of Manu, the mythological lawmaker in Hinduism, has come into focus again, with civil society organisations holding protests on Sunday to have it removed from the premises of the Rajasthan high court.

The statue of Manu holding the Manusmriti in his hand, which has been in the Rajasthan high court premises since its installation in 1989, has faced several protests over the years.

On Sunday, rights activists held a silent protest at the high court to have the statue removed.

“Till a decision is taken on this matter, we want the statue covered, so we gave the authorities a shroud to cover it up. If they don’t do it, we’ll do it ourselves,” Kavita Srivastava of the People’s Union for Civil Liberties said.

The protest at the high court was a part of similar symbolic protests held simultaneously in 110 villages across Rajasthan, and in 18 other states.

“This is a nationwide campaign to have this statue removed. Next week, we’ll be filing a petition in the high court for the same,” said Govardhan Jaipal, an advocate who is a part of the campaign’s core committee.

The Manu statue invited controversy almost immediately after it was installed, and in July 1989, the Rajasthan high court issued an administrative order to have it removed. However later that year, the order was stayed by the high court after Vishwa Hindu Parishad leader Acharya Dharmendra, among others, filed a PIL against it.

While issuing the stay order, the high court also held that in the future, the matter would have to be heard by a division bench comprising the chief justice of the court.

One of the longest pending cases in the Rajasthan high court, the PIL now has Dalit activists as interveners and was last heard in 2015, when the proceedings were marred due to protests by Brahmin lawyers.

Those opposed to the removal of the statue argue that the statue doesn’t have any caste connotations and is a mere tribute to who they believe was the first law giver.

Over the last 32 years, Dalit leaders and politicians from all over the country, including Kanshi Ram and former Union minister Ramdas Athawale, have protested against the statue.

In 2018, two women were arrested, along with a third associate of theirs, for smearing the statue with black ink. The arrested, Sheela Bai Pawar, Kanta Ramesh Ahire and Dawood Shakil Sheikh, were all members of the Republican Party of India-Kharat, a breakaway faction of the RPI-Athavale.

Last year, over 600 Dalit activists, academics and journalists wrote to Congress leader Sonia Gandhi to intervene in the matter as Rajasthan is a Congress-ruled state.

“The statue, and the ideas of Manu, are so demeaning to women and Dalits. It cannot co-exist with the principles of natural justice and the Indian constitution. If the matter is not listed in the high court soon, we will move the Supreme Court for the statue’s removal,” said Srivastava.

Some of the principles laid out in Manusmriti, the code of Manu, with regard to the rights and duties of Shudras – the fourth varna or category in the Hindu varnashrama or birth-based discriminatory caste order – are as follows: The purpose of a shudra is to serve the other three varnas (verse 1.91); while a Brahman’s name must denote something auspicious, a Kshatriya’s name be connected with power, a Vaisya’s with wealth, but a sudra’s name should express something contemptible (verse 2.31); a Brahman who marries a Sudra woman, will sink into hell upon his death (verse 3.17); a Sudra was created to be a slave to the Brahman (verse 8.413); a Brahman can seize a sudra’s property as the latter cannot won any property (verse 8.417).

About women, it talks about the following, among other things: It’s the nature of women to seduce men (verse 2.213); one should not sit in a lonely place with one’s mother, sister or daughter, as the senses are powerful and can master even the learned (verse 2.215); libations of water should not be offered to women who through lust live with many men or drink spirituous liquor (verse 5.90); drinking spirituous liquor, associating with the wicked, separation from the husband, rambling abroad, sleeping at unseasonable hours, and dwelling in other men’s houses, are the six causes of the ruin of women (verse 9.13).