PMLA Ruling Signals That Focus on Due Process Is Urgent Priority

In a system like ours, where the average person approaching the average police station does so without any great hope for justice, it is due process which is the most urgent need to protect life and liberty. 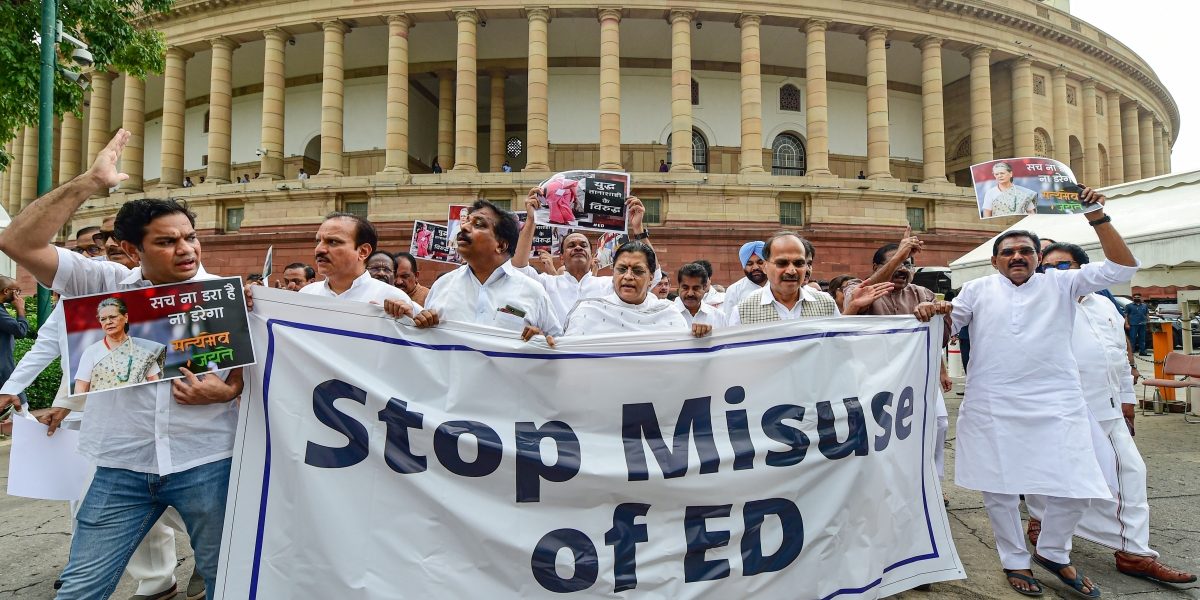 Congress MPs holding banner and placards stage a protest march at Parliament House complex to express their solidarity with the party Chief Sonia Gandhi who has to appear before the Enforcement Directorate in connection with the National Herald case, in New Delhi, July 21, 2022. Photo: PTI/Kamal Kishore

Due process is a concept much needed in India. While recognised as a constitutional standard, the conversation around executive action, especially police action, is mostly around a rights-based framework. To put it simply, the conversation focuses on substantive rights such as liberty, privacy and freedom and broad declarations regarding these rights, rather than an engagement with the minutiae of the criminal justice process. The recent judgement of the Supreme Court, mainly on the constitutionality of the post-2015 amendments to the Prevention of Money Laundering Act, 2002, is notable in this respect. The petitioners, about 250 of them, did not challenge the entirety of the statute, but the exceptions that this Act carved out from normal criminal processes under the Code of Criminal Procedure, 1973.

The PMLA, under which the Enforcement Directorate investigates and prosecutes the offence of money laundering, has some major departures from normal criminal procedure. ED officers are empowered to record admissible statements, have additional powers of search and seizure, subject to ratification by the Adjudicating Authority under the Act, and there are additional restrictions on grant of bail. All these and certain other aspects of the Act were challenged to circumscribe the powers of the Enforcement Directorate and its officers.

The Supreme Court has upheld all these aspects, stating that the PMLA is a code dealing with money laundering and ED officers investigating under this Act are not police officers, and as such, not bound by the restrictions applicable to the police under the Code of Criminal Procedure. Much has been made of the fact that the ED is staffed by senior officers and that such officers are assumed to be fairer in their conduct than the regular police. To be fair, the PMLA also incorporates penalties against erring officers for vexatious search. Such safeguards have been deemed by the Supreme Court to be sufficient to combat any misuse.

The effect of the judgment may be somewhat overstated, because the ED will likely continue to function in the same manner as it did before it was passed. While affirming its powers, the court has however reiterated the procedural limitations of this Act, including the necessity of a predicate offence before a prosecution for money laundering can be launched. A predicate offence is one mentioned in the schedule to the PMLA, which is the crime which gives rise to the ‘proceeds of crime’, which are then laundered. The clear reinforcement by the Supreme Court of the necessity of a predicate offence is going to help in circumscribing the misuse of the ED’s power.

The court has confirmed that even holding such proceeds of crime is a crime under this Act, and there does not need to be an active conversion of black money into white, so to speak, for an act to be considered money laundering under Indian law. Further observations regarding the necessity of establishing foundational facts and evidence before the reversal of burden of proof under the PMLA comes into effect against the accused are welcome, if not novel, observations.

The constitutionality of the provisions of the Act which were under challenge were always likely to be upheld, given the current environment. Besides, misuse of penal powers is unfortunately by itself not a ground for declaring a law as unconstitutional. The ED’s dismal rate of conviction is public knowledge. The amendments to the PMLA after 2015 are problematic in the wide powers that they give to the ED, which is essentially an untrained police force. A law may be bad, but not unconstitutional. The solution to this is not necessarily legal but political, in that Parliament will have to amend the law to make it more rational and commensurate with its stated objectives. To do so, the political Opposition will have to regain power and numbers in Parliament.

The current travails being faced by the Opposition at the hands of the ED should also serve to remind the political class of the need to ensure fair laws and procedures for all. In a system like ours, where the average person approaching the average police station does so without any great hope for justice, it is due process which is the most urgent need to protect the life and liberty of the poorest and most helpless. The ED, in a perverse democratisation, has brought this fear to the high and mighty. Let the reforms, when they happen, realise the need for due regulation of the ED and all other agencies performing investigative and penal functions. If that happens, this phase of misuse of agencies like the ED, could yet turn out to be an instructive period for the development of the compact between the state and the people of the republic.

Sarim Naved is a lawyer based in Delhi.