People from Across Assam Come Together to Protest Against Citizenship Bill

Effigies of PM Modi were burned to protest the passage of the Citizenship (Amendment) Bill, 2016, which proposes to give citizenship to non-Muslims from neighbouring countries. 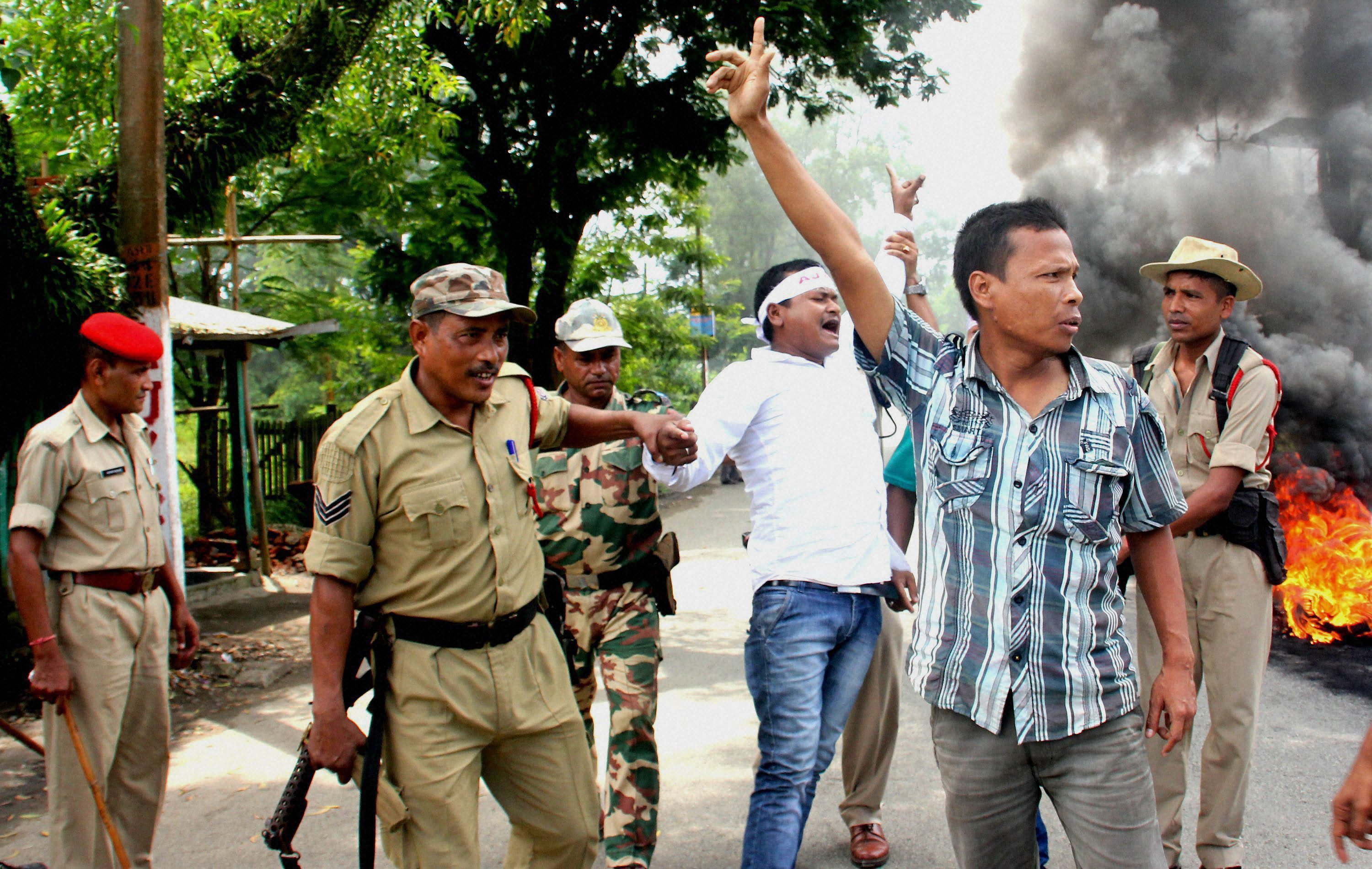 The Asom Jatiyatabadi Yuva Chhatra Parishad burnt the effigies of Modi, Singh and Sonowal at Nalbari.

The members of the All Assam Sutia Students’ Union blocked the rail traffic at Sarupathar, prompting the police to detain a number of agitators, an official said.

Thousands of slogan-shouting protestors, carrying banners against the bill, marched through towns across the state, before submitting memoranda addressed to the prime minister to the respective district deputy commissioners.

The agitators shouted slogans refusing to take the “burden of foreigners” and criticised the BJP-led government in the state for supporting the Centre’s attempt to amend the bill, which they described as “a destroyer of ethnicity, culture and language of the local indigenous people of Assam”.

The All Assam Students’ Union (AASU) took out processions at many places across the state against the passage of the Citizenship (Amendment) Bill, 2016, which proposes to give citizenship to non-Muslims from neighbouring countries.

AASU chief advisor Samujjal Bhattacharya told reporters, “There is a continuous people’s movement against the bill. Organisations, individuals and various other forums have united as the proposed bill will cause a great damage to Assam’s political future and the survival of its indigenous people, their identity, culture and land.

“The Centre should immediately take steps to withdraw the bill from Parliament,” he said, claiming that it sought to make fundamental alterations in the citizenship and immigration norms by relaxing the requirements for getting Indian citizenship.

Meanwhile, a number of MLAs of the ruling BJP also opposed the bill and said allowing citizenship to Hindu Bangladeshis would pose a threat to the identity of the Assamese people and affect the interest of the indigenous people of the state.

State cultural affairs minister Naba Kumar Doley said the issue was related to people’s emotions and the government would not do anything to harm the interests of Assam.

“We cannot accept the Bangladeshis. I will not remain as an MLA if they are allowed to come in. We will force them to leave,” BJP MLA Binod Hazarika told a public meeting in his constituency, Chabua.

Bokajan MLA Numal Momin said the Assamese people could not become a minority community in their own state and that he would always work for the indigenous people of the state.

Other BJP MLAs, including Suren Phukan, Terash Gowalla, Jogen Mohan and Debananda Hazarika, said the chief minister would not do anything that would impact the interests of Assam and its people.

Lahowal’s BJP MLA Rituparna Baruah claimed that there was a “conspiracy” against Sonowal to destabilise his government, but did not elaborate.

Reacting to Baruah’s claim, state BJP chief Ranjeet Kumar Dass told reporters that he would seek a reply from the MLA to clarify about the “conspiracy”.

On the bill, he said, “Let us wait till June 30, when the final draft of the NRC will be published. We will make our stand public after that.”

Replying to a question, he said BJP allies AGP and BPF, who were opposed to the bill, would not part ways with the saffron party and the Sonowal government would complete its five-year term.