Of 'Justice Clocks' and Court Rankings: Is Judicial Contest Really the Way to Go?

Reducing the role of justice dispensation and its ranking to a mere count of cases is also worrisome as it may incentivise a blind need to increase the number of cases disposed without ensuring reasoned quality decisions. 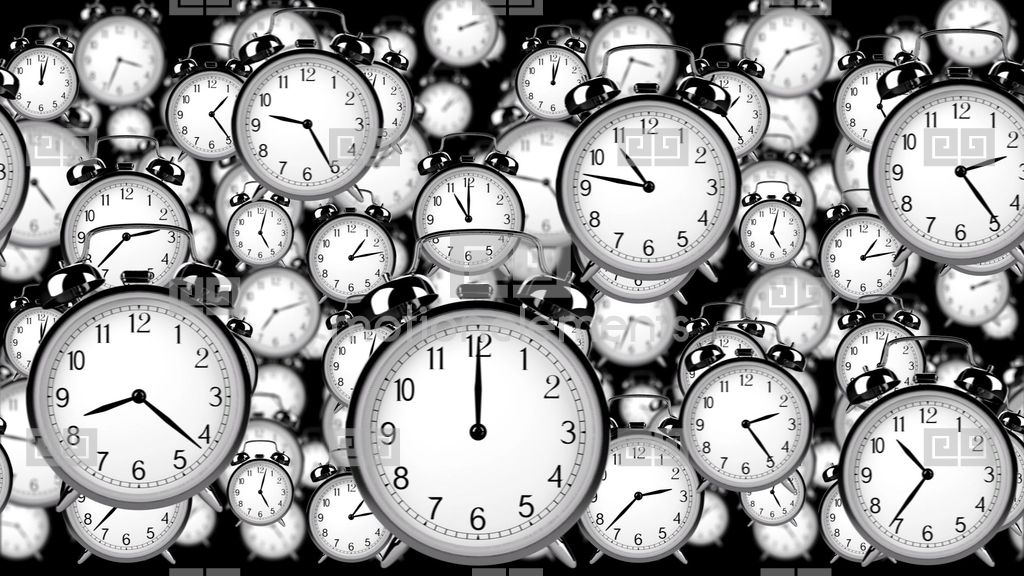 The problem plaguing the Indian judicial system is not just the sheer volume of cases that are pending in courts, but also the duration for which the cases remain pending. Credit: Shutterstock

An ‘employee of the day’ format is unlikely to be a desirable system for assessing the performance of courts in our country. Addressing a National Law Day event in November last year, Prime Minister Narendra Modi had suggested installing ‘justice clocks’ at various court premises to rank the best performing courts and encourage competition in the disposal of cases.

While there was no further mention of the idea post the event, a recent report in the Times of India stated that the Centre will soon be installing justice clocks in all 24 high courts and will display: (a) the daily rate of disposal of cases; (b) the number of pending cases; and (c) the individual rank of each of these courts. The report also states that similar justice clocks are set to be implemented across the subordinate courts to encourage competition and create awareness of judicial matters.

The idea of installing justice clocks is problematic because the resolution or disposal of cases, and the dispensation of justice should not be measured and ranked in a similar manner as ranking a grocery bagger at a supermarket based on a count of bags packed. To demonstrate why the approach is problematic, let us consider the following statistics regarding the high courts: 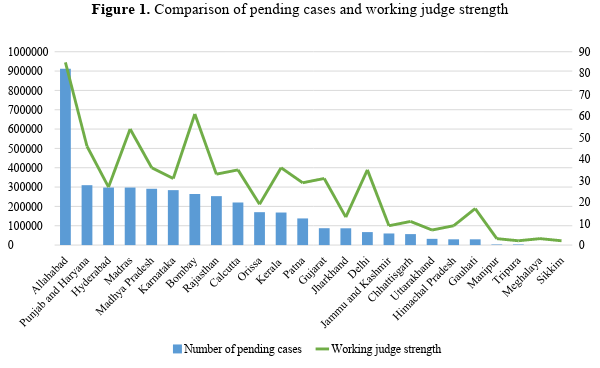 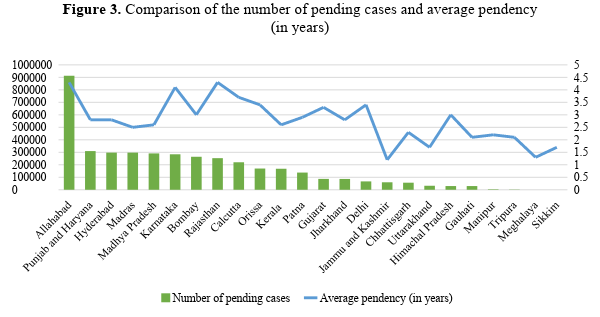 As seen in Figure 1 and Figure 2 above, a comparison and ranking of courts based on the number of pending cases, or the average number of cases instituted and disposed per month, is problematic because one cannot compare courts when the working judge strength is highly variant.

Take the example of the Bombay high court and the Rajasthan high court. While the number of pending cases is comparable (with Rajasthan being slightly higher), the working judge strength of Rajasthan is nearly half of that of Bombay. The same holds true even if one were to look at the average number of cases disposed and instituted per month. Assuming that the number of cases in these instances are normalised to a per-judge calculation, it would still be incomplete to rank various high courts on a real-time basis based solely on the number of cases disposed, without considering the nature of the cases they are disposing. If one high court disposes a large number of miscellaneous cases and is ranked higher than a court which disposes a smaller number of appeals, such a ranking would be inherently flawed.

Further, the problem plaguing the Indian judicial system is not just the sheer volume of cases that are pending in courts, but also the duration for which the cases remain pending. 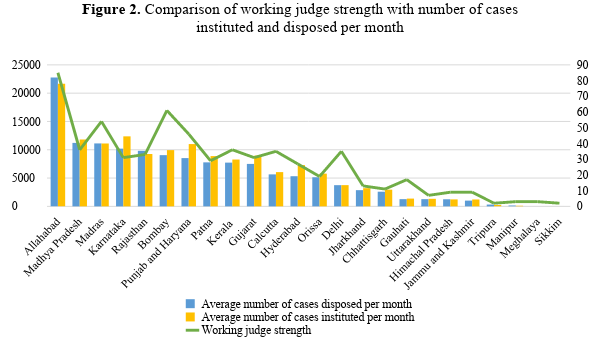 Source: Court News by the Supreme Court; Vol. XII Issue 1 (January – March, 2017). Average pendency as per statistics in Approaches to Justice in India: A Report by DAKSH.

Figure 3 above demonstrates the problem of ranking courts based on a count of pending cases without considering the amount of time such cases remain pending in the judicial system. A ranking based on the number of pending cases would place the Allahabad high court at the lowest level. However if one considered the average pendency (in years) of a case, the high courts of Karnataka and Rajasthan fare quite similarly. Therefore a ranking system must consider the average pendency and average time taken to dispose cases, rather than relying solely on a count of cases.

Reducing the role of justice dispensation and its ranking to a mere count of cases is also worrisome as it may incentivise a blind need to increase the number of cases disposed without ensuring reasoned quality decisions. The need for a just and fair decision must not be overridden by a need for speed in disposal. Such a ranking system would be even more problematic in the comparison of subordinate courts.

Although the ranking of courts based solely on the rate of disposal of cases or the number of pending cases is problematic, the need for such monitoring however is of vital importance. By allowing judges to keep a real-time check on the number of cases before them and the number of cases disposed, it can help judges keep track of their progress on cases in their docket. If the justice clocks are able to provide judges further information regarding the category or subject matter of cases pending before them, the number of adjournments they have provided in cases, and the duration for which such cases have been pending, such information can further enable judges to monitor and pace their progress.

Therefore, while the justice clock idea is a good move from a real-time court management perspective, the use of them to rank courts and create public awareness based on the limited information being considered, is not the way forward.

Shruthi Naik is a research associate at DAKSH, Bangalore.