The bench also slammed the TV channel for hosting a debate on the Gyanvapi mosque in the first place. 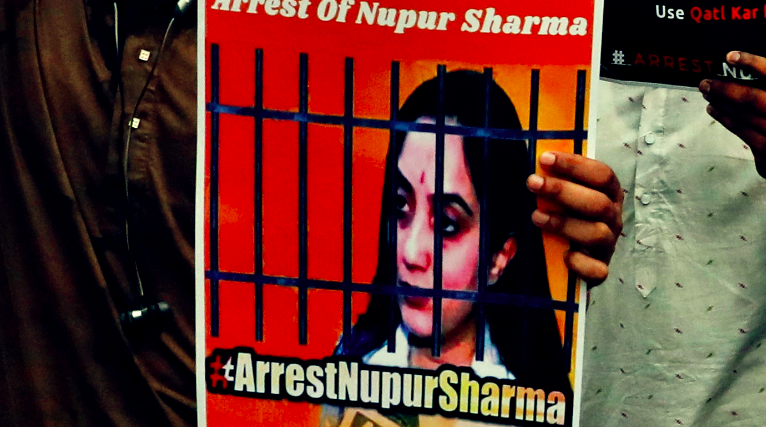 A detail from a photograph of people shouting slogans as they hold placards during a protest march demanding the arrest of Nupur Sharma for her comments on Prophet Mohammed, in Kolkata, India, June 8, 2022. Photo: Reuters/Rupak De Chowdhuri

New Delhi: The Supreme Court on Friday castigated suspended BJP leader Nupur Sharma for her “disturbing” remark against Prophet Mohammad, saying it has led to unfortunate incidents in the country

The court said the remark was made either for cheap publicity, political agenda or some nefarious activities.

“The way she has ignited emotions across the country. This lady is single-handedly responsible for what is happening in the country. We saw the debate on how she was incited. But the way she said all this and later says she was a lawyer, it is shameful. She should apologise to the whole country,”Justice Kant said, according to Bar and Bench.

“She actually has a loose tongue and has made all kinds of irresponsible statements on TV and set the entire country on fire. Yet, she claims to be a lawyer of 10 years standing… She should have immediately apologised for her comments to the whole country.”

Senior advocate Maninder Singh, appearing for Sharma, said she had indeed apologised for her remarks and there are several judgments that say there cannot be two FIRs for the same incident.

The bench said “her apology came too late and that too conditionally saying if religious sentiments are hurt and so on. She should have been on TV immediately and apologised to the nation”.

The court said her petition smacks of arrogance and that she thinks that the magistrate of the country is too small for her.

“When an FIR is registered and you are not arrested, this shows your clout. She thinks she thinks she has the power to back up and goes on to make irresponsible statements,” the bench said.

Singh said Sharma was a spokesperson of a political party and her unintentional comments were in relation to a debate.

“If you are a spokesperson of a party, it is not a license to say things like this,” the bench said, adding, “if there was a misuse of the debate, the first thing she should have done was to file an FIR against the anchor”.

Singh said she had reacted to the debate initiated by other debators and pointed to the transcript of the debate. He said that there were serious debates on the issue within the same community and Sharma’s remarks were made in that context only.

The bench said, “what was the TV debate for? Was it to fan an agenda and why did they choose a sub-judice topic? What is the business of the TV channel to discuss the matter which is sub-judice, except to promote an agenda?

Referring to various apex court verdicts, Singh said there cannot be a second FIR on the same cause of action.

Justice Kant said she has remedy before the high court and can very well approach it, if there is a second FIR.

Singh then referred to the Arnab Goswami case of 2020 and TT Antony case of 2001, and said the law has been laid down by the apex court that multiple FIR on the same configuration can be clubbed and there can be no second FIR on the same cause.

The bench said, “the case of a journalist expressing his right on a particular issue is on a different pedestal from a spokesperson of a political party who is lambasting others with irresponsible statements without thinking of the consequences”.

Singh said she has joined the investigation being conducted by the Delhi Police and not running away and multiple FIRs are lodged against her in Mumbai, Hyderabad, Nagpur to Jammu and Kashmir for the same cause of action.

Sharma’s remark against the Prophet during a TV debate triggered protests across the country and drew sharp reactions from many Gulf countries. The BJP subsequently suspended her from the party.

While refusing to entertain Sharma’s plea for clubbing of FIRs lodged in various states against her for the remark, the bench allowed her to withdraw the plea.

“She has a threat or she has become a security threat? The way she has ignited emotions across the country this lady is single-handedly responsible for what is happening in the country,” the bench said when Sharma’s lawyer Maninder Singh pointed out that she was facing threats to life.

The bench also slammed the TV channel for hosting a debate of this kind in the first place. The debate was on the Gyanvapi mosque, a matter which is currently being heard by the courts. “What was the TV debate for? Only to fan an agenda? Why did they choose a sub judice topic,” the judges asked.

The court also criticised the Delhi Police for not taking substantive action in the FIR against Sharma. Sharma’s counsel said she has joined the probe in the case. “Then what happened There must have been red carpet for you. A red carpet!” the bench responded.

After being told that the Supreme Court would not be entertaining her plea on clubbing FIRs, Sharma agreed to withdraw it.

After the court’s unsparing criticism of Sharma, the Congress said the Supreme Court has rightly called out Sharma for being responsible for igniting emotions across the country with her remark against the Prophet, and that the ruling party should hang its head in shame.

In a statement, Congress general secretary Jairam Ramesh said the court has made crucial and far-reaching observations and strengthened the party’s resolve to fight “destructively divisive ideologies”.

“These remarks by the Supreme Court, which resonate with the entire country, should make the party in power hang its head in shame,” he added.

The Left parties also hit out at the government over the Supreme Court’s observations.

“We hope that beyond words, if according to the Supreme Court, Ms. Sharma is responsible for starting the hate spiral & most recent reprehensible cycle of violence, she will be proceeded upon as per law…,” CPI general secretary Sitaram Yechury said in a tweet.

“But if the law does not act against her and others like her promoted by the party, who sow discord, separatism and damage India, the wrong message would go out. We would find many more like her mushrooming from the RSS/BJP’s hate factory and on vitriolic TV debates,” he said.

CPI MP Binoy Viswam tweeted, “Red carpet for Nupur Sarma, prison cells for Teesta and Sreekumar! Comments from Supreme Court should alert Modi Govt. Irresponsibility, driven by bigotry shouldn’t be the hallmark of any spokesperson. Such elements caused Udaipur incident. They should apologise to People & Nation.”

Meanwhile, a letter petition was filed before Chief Justice N V Ramana seeking withdrawal of adverse remarks made by a Supreme Court bench against Sharma.

The letter petition said that it be treated as a PIL and the adverse remarks made during the hearing be declared as “uncalled for”.

Note: This copy, which was first published at 12:20 pm on July 1, was updated with additional details on the same day at 10:10 pm.