NRC state coordinator Prateek Hajela said those people whose names have been excluded in the first list need not worry. 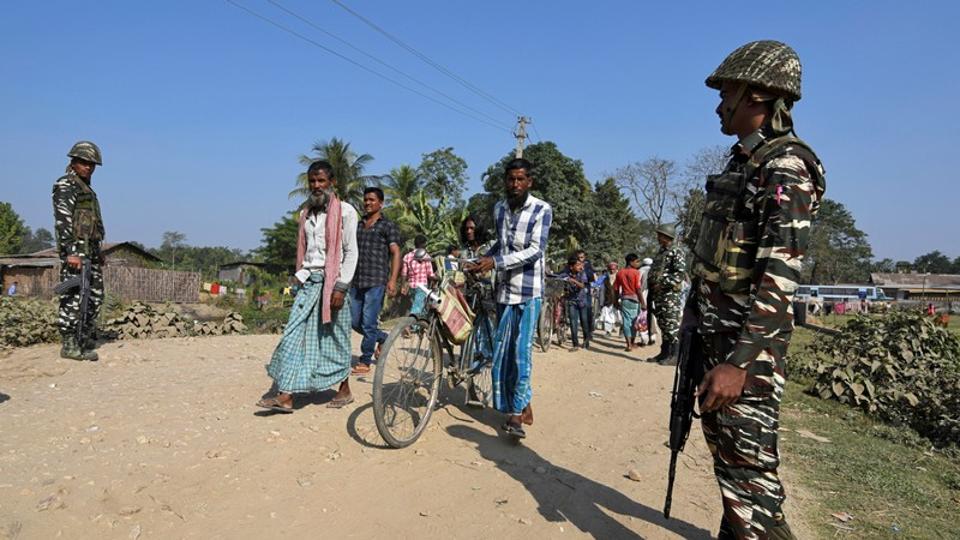 Villagers walk past Central Reserve Police Force (CRPF) personnel patrolling a road ahead of the publication of the first draft of the National Register of Citizens (NRC) in the Juria village of Nagaon district in Assam, on December 28, 2017. Credit: Reuters

Guwahati: The much-awaited first draft of the National Register of Citizens (NRC) was yesterday published with the names of 1.9 crore people out of the 3.29 crore total applicants in Assam recognising them as legal citizens of India.

The rest of the names are under various stages of verification, Registrar General of India Sailesh said at a press conference held at yesterday midnight where he made the draft public.

“This is a part draft. It contains 1.9 crore persons, who have been verified till now. The rest of the names are under various stages of verification. As soon as the verification is done, we will come out with another draft,” he said.

NRC state coordinator Prateek Hajela said those people whose names have been excluded in the first list need not worry.

“It is a tedious process to verify the names. So there is a possibility that some names within a single family may not be there in the first draft,” said Hajela.

“There is no need to panic as rest of the documents are under verification,” he said.

Asked about the possible timeframe for the next draft, the RGI said it will be decided as per the guidelines of the Supreme Court – under whose monitoring the document is being prepared – in its next hearing in April.

The entire process will be completed within 2018, Sailesh said.

The application process started in May, 2015 and a total of 6.5 crore documents were received from 68.27 lakh families across Assam.

“The process of accepting complaints will start once the final draft is published as rest of the names are likely to appear in that,” Hajela said.

People can check their names in the first draft at NRC sewa kendras across Assam from 8 am on January 1. They can also check for information online and through SMS services.

The RGI informed that the groundwork for this mammoth exercise began in December 2013 and 40 hearings have taken place in the Supreme Court over the last three years.

Assam is the only state with an NRC, first prepared in 1951.

The Supreme Court, which is monitoring the entire process, had ordered that the first draft of the NRC be published by December 31 after completing the scrutiny of over two crore claims along with that of around 38 lakh people whose documents were suspect.