The apex court on Saturday cleared the way for the construction of a Ram Temple at the disputed site at Ayodhya. 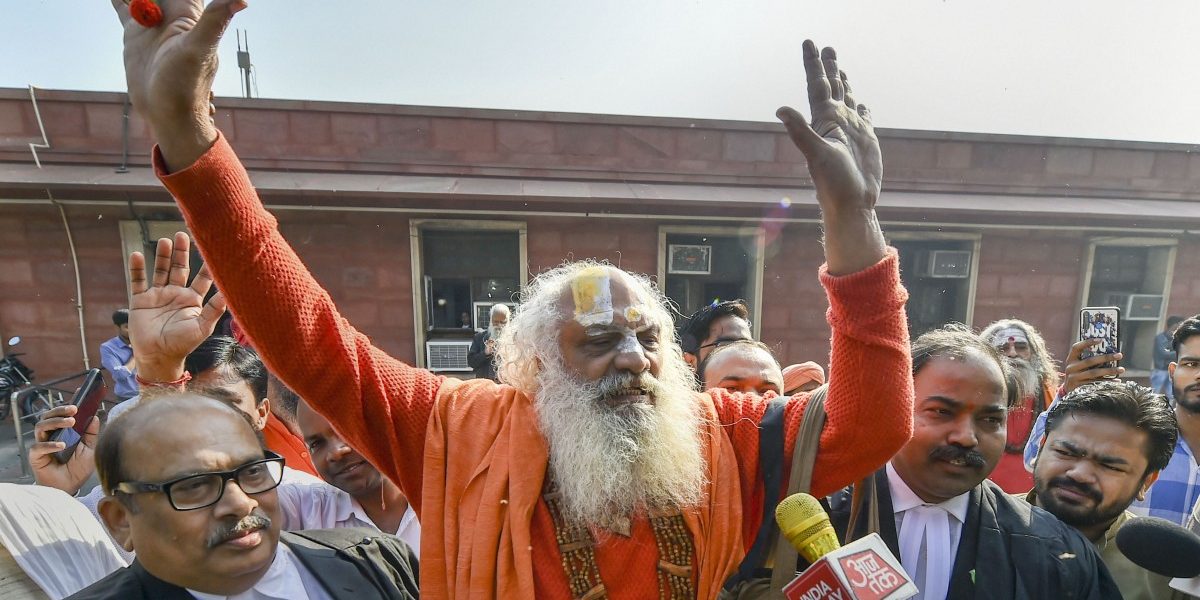 Mahant Dharam Das of the Nirmohi Akhara talks to the media as he arrives at the Supreme Court for the Ayodhya case verdict in New Delhi, November 9, 2019. Photo: PTI/Arun Sharma

A member of the Nirmohi Akhara, a party to the case, said the outfit has no regrets over the Supreme Court saying that it is not a shebait of the deity Ram Lalla. Meanwhile, the Vishva Hindu Parishad described the verdict as a “decisive step” towards the construction of a “grand” Ram temple. Rashtriya Swayamsevak Sangh, too, celebrated the judgment, with chief Mohan Bhagwat signalling this as the culmination of a long-drawn battle for “justice”.

The apex court on Saturday cleared the way for the construction of a Ram Temple at the disputed site at Ayodhya, and directed the Centre to allot a five-acre plot to the Sunni Waqf Board for building a mosque.

The court has said in its verdict that the Nirmohi Akhara is not a shebait or devotee of the deity Ram Lalla. A bench headed by Chief Justice Ranjan Gogoi said the Akhara’s suit was barred by limitation.

“We have no regrets on this because we were batting for Ram Lalla. The court has accepted Ram Lalla’s side and with this, our motive was fufilled,” Nirmohi Akhara member Mahant Dharam Das told PTI.

Meanwhile, the Vishva Hindu Parishad urged the Central government to take speedy steps on the directions issued by the top court.

Addressing a press conference here, VHP working president Alok Kumar said the apex court order is a “decisive step towards construction of grand Ram temple in Ayodhya”. He claimed that 60% of pillars and beams for the Ram temple are ready.

“Today is a day of happiness for Hindus the world over,” Kumar said.

RSS sarsanghchalak Mohan Bhagwat made a press statement welcoming the verdict on Ayodhya. He said that the verdict does justice to people’s faith and beliefs and is in line with the sentiments of the people of the country. Arguing that the judgment comes after a thorough examination of various perspectives regarding the Ram Janmabhoomi and the scrutiny of all arguments placed by all parties, he thanked all the judges and lawyers associated with all parties for “patiently going through this long journey in the quest for truth and justice”.

He also expressed gratitude to various “supporters and martyrs” for their efforts.

Stating that the verdict shouldn’t be seen as a binary of victory and loss, he added that the decision was made through the “churning of truth, and should be viewed as a decision that will promote integrity and strengthen brotherhood in the entire Indian society”.

He also appealed to the people of India to celebrate the judgment with restraint, within the limits of the law and the constitution and concluded by appealing to the people to forget all past issues and come together to build a grand Ram temple in Ayodhya.