In the entire discussion on NPR, NRC and CAA, one important point seems to have been missed out – the legal status of the NPR. Nowhere does the Citizenship Act actually mandate the creation of the population register. 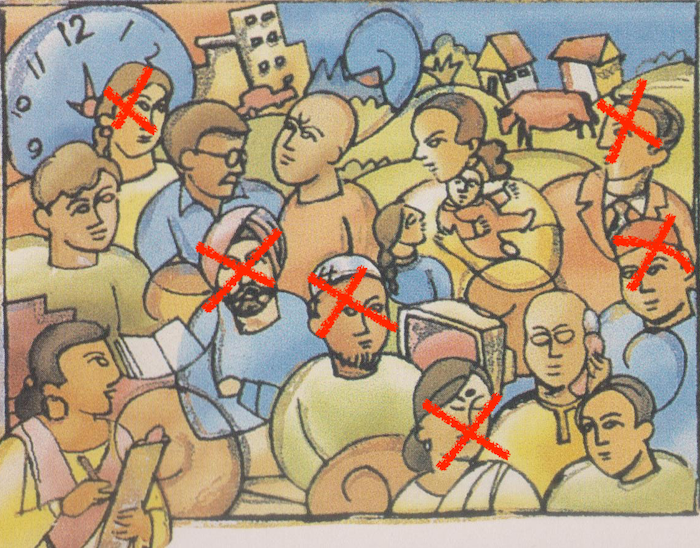 Illustration: Adapted from a first day cover issued by the Postal Department.

Some of the state governments have declared that they will not implement the National Population Register (NPR). The Union government has allotted over Rs 3000 crore for this project to be carried out in the whole country. Project NPR is claimed to be aimed at supporting the Census operations which are likely to start shortly. But what exactly is its legal status?

Under Article 256 of the constitution, a law made by the parliament must be enforced throughout the country and the states are duty-bound to exercise their executive power to ensure compliance with that law. So the question about whether states can refuse to implement the NPR and the National Register of Citizens (NRC) – in the context of the Citizenship (Amendment) Act, 2019 (CAA) – depends on whether these registers are part of a law passed by parliament.

Also read: As States Battle Centre on CAA, a Guide to the Issues Before the Supreme Court

However, that stage has clearly not been reached yet. First, instead of officially refusing to comply with the CAA, the state governments opposed to it have simply passed resolutions in their legislative assemblies requesting the Union government to repeal the Act. The state of Kerala was the first to pass such a resolution. Technically such resolutions may not have the sanction of the house rules. But a legislature has the power to even suspend a rule to enable it to discuss a matter or express an opinion if the rule stands in the way.

The constitutional validity of the CAA is going to be considered by the Supreme Court shortly. The court may rule either way and the issue of citizenship of persecuted ‘illegal migrants’ may get settled one way or the other. But the issue of NRC will continue to haunt the citizens for a long time. Non-implementation of the NRC, for the time being, does not eliminate the fear of detention or deportation from the minds of a section of Indians.

Despite the pending hearing in the Supreme Court, the government is going ahead with the NPR –  a project created under the Citizenship (Registration of Citizens and Issue of National Identity Cards) Rules, 2003. These rules were framed under sub-sections (1) and (3) of section 18 of the Citizenship Act, 1955. The NPR is defined under rule 2(l) of the said rules. As per the definition, NPR means the register containing details of persons usually residing in a village or rural area or town or ward or demarcated area within a ward in a town or urban area.

Sub rule (4) says that the NPR shall be prepared by collecting information relating to all persons who are usually residing within the jurisdiction of the local registrar, who is a revenue official of the state government at the village level. Sub rule (5) says that “the Local Register of Indian citizens shall contain details of persons after due verification made from the Population Register.” in Other words, inclusion of the details in the NRC will be done after due verification undertaken from the NPR.

Also Read: What Is Article 131, Under Which Kerala Has Challenged CAA?

Thus the NPR is a document which contains all the details of persons, not only citizens, who live in an area in a village. The data for the NRC will essentially consist of the data contained in the NPR. Thus, the NPR becomes very important in the context of the preparation of the NRC. The rules make it clear that the NPR and the NRC are interlinked. Although the CAA is not legally connected with the NRC, the political comments frequently made by the ruling party leaders clearly establish that linkage.

In the entire discussion on the NPR, NRC and CAA, one important point seems to have been missed out – what exactly is the legal status of the NPR?

Surprisingly, though the NPR appears for the first time in the Citizenship (Registration of Citizens and Issue of National Identity Cards) Rules framed in 2003, there is no mention of it in any of the provisions of the Citizenship Act – the parent law.

That is rather strange because these rules have been framed under clauses (1) and (3) of section 18 of the Citizenship Act. Clause (1) clearly says that rules may be made to carry out the purposes of the Act. But the Act makes no provision whatsoever for the NPR. This omission is important because rules can be made only in respect of a provision in the parent Act.

Rules are not independent provisions and they cannot provide for any substantive scheme or project unless it is already provided for in the law enacted by parliament. Such rules are ultra vires the law and can have no legal validity. The Supreme Court had, in M/s Tata Iron and steel company Ltd. Vs Workmen of M/s Tata Iron and Steel Company Ltd. observed, “The delegation of legislative power is permissible only when the legislative policy and principle are adequately laid down”

The rules relating to the NPR seem to suffer from serious legal infirmities. These infirmities existed at all times ever since these rules were framed and they cannot be cured by having the rules laid before both houses of parliament. Only a suitable provision in the parent Act can cure these infirmities.

PD.T. Achary is a former secretary general of the Lok Sabha and a constitutional expert.