The report also pointed out that the new metal flooring increased the weight of the bridge. 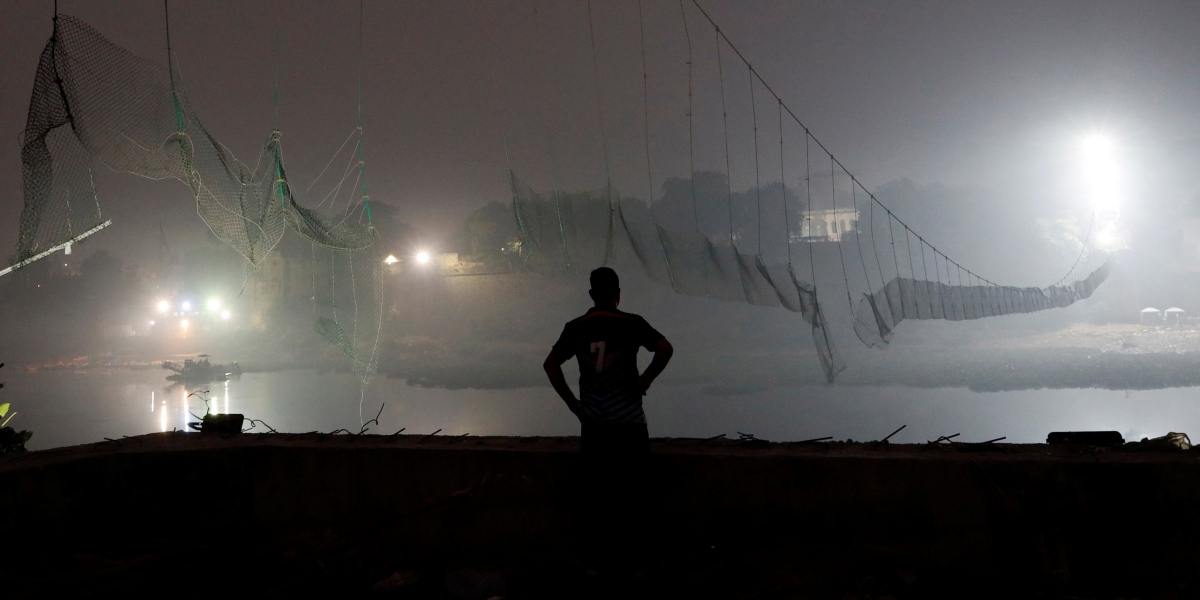 A security officer stands near the damaged Morbi suspension bridge after it collapsed on October 30, in Morbi, Gujarat. Photo: Reuters/Stringer

New Delhi: The contractors who were hired to renovate the Morbi bridge did not address major issues like rusty cables and loose bolts and only replaced the metal flooring, a preliminary probe by the Forensic Science Laboratory (FSL) has found.

The report was submitted to a local court in Morbi that is hearing the bail pleas of eight of the nine accused who have been arrested in connection with the tragic collapse last month that resulted in the deaths of 135 people.

Among the problems that the FSL probe identified was the presence of rusty cables, broken anchor pins and loose bolts. The report also pointed out that the new metal flooring increased the weight of the bridge. According to the prosecution, both the repairing contractors were not qualified to carry out such repair and renovation work.

“The report revealed that the cables on which the entire bridge was hanging were rusted. The anchor pins that hold the cables on the ground were broken while the bolts on the anchor were loose by three inches. The prosecution told the court that it is definitely considered as negligence,” said district government pleader Vijay Jani.

The arrested persons included Oreva managers Dipak Parekh and Dinesh Dave, and repair contractors Prakash Parmar and Devang Parmar, owners of Dev Prakash Solution, hired by the corporate group for the renovation of the bridge, among others.

“Dev Prakash Solution has admitted they had changed only the flooring. According to the FSL report, the new metal flooring also increased the weight of the bridge. Moreover, both the repairing contractors were not qualified to carry out such repair and renovation work,” said Jani.

The report also revealed that the Oreva Group did not hire any expert agency to assess the load-bearing capacity of the bridge before throwing it open to the public.

The prosecution also said that Oreva sold 3,165 tickets on October 30 alone and there was no coordination between ticket booking offices on both sides of the bridge.

As per the first information report, at least 250-300 people were present on the bridge when it collapsed after one of the cables snapped.

He said the booking clerks, who are under arrest, should have stopped the sale of tickets after an extent but they continued to sell tickets and allowed more people to go on the bridge.

The defence informed the court that three security guards were on duty on the day of the tragedy, two on both sides of the bridge and one in the middle of the structure. While two of the three guards are in custody, the third one fell into the river but survived.

The principal district and sessions judge P.C. Joshi, who is hearing the bail plea of the accused, asked, “What is crowd management and what was your duty?” They did have a response, according to the Times of India.

The newspaper reported that the prosecution opposed Oreva manager Deepak Parekh’s bail plea saying he had placed the purchase orders and signed the subcontract with DevPrakash Solution, the firm that was contracted for the renovation.

“As a manager, it was his duty to instruct the staff that the bridge’s entry should be closed after 100 tickets were sold and other people should be allowed only after those on the bridge left. This is the reason he cannot escape from the provisions of IPC section 304 (culpable homicide not amounting to murder),” the prosecution argued, according to TOI.

The court is likely to issue an order on the bail applications on Wednesday.